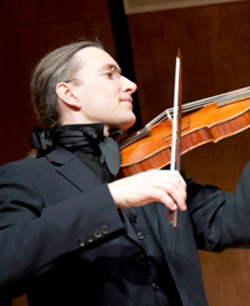 The evening began with a bang in J. S. Bach’s Orchestral Suite No. 3 in D. Glorious but overpowering, the trumpets often overwhelmed the small chamber orchestra of strings and oboes conducted by Wilkins. Although engulfed, the string section played smoothly and cohesively, especially during the famous Air. Farther into the suite, especially within the Bourée, the harpsichord timbre cut through the texture with an unpleasant, mechanical tone — a fault of the instrument, not the player. The suite ended with a repetitive Gigue that caused the mind to wander.

Stirring things up, Olivier Brault strode onto the stage with a highly energized presence. He began Vivaldi’s Violin Concerto in c with a large gesture, often facing the orchestra to provide convivial leadership as both conductor and soloist. The Largo was meditative in style and cohesive in sound, with Brault not only leading but also adapting to the ensemble. A Vivaldian furor ensued with the ferocious Allegro non molto, Brault taking no prisoners and relishing every moment in what was his first memorized, public performance of the work.

Continuing with Vivaldi, concertmaster Alan Bodman joined Brault for an enjoyable performance of the Concerto for two violins in a. Here, a conversation between the Baroque and modern performance practices seemed to occur: Brault used minimal vibrato until the end of each note while Bodman vibrated continuously on every note. A giddy, crowd-pleasing Allegro followed.

After a gratifying intermission, during which the intergenerational audience could enjoy beverages and desserts, the program continued with Bach’s a-minor Violin Concerto, a contrapuntal confection that was most similar to the Vivaldi pieces on the program. The Andante provided a nuanced, subdued melancholy while the third movement brought smiles to Brault’s countenance. Bizarrely, the audience giggled at every stage reset, a frequent phenomenon throughout the evening.

The highlight of the evening was Vivaldi’s Concerto for Two Violins and Cello in d, particularly excellent for the cohesive sound of Brault and his fellow soloists, violinist Linda Nagy Johnston and cellist Miles Richardson. A reflective Largo with solos by Brault proved especially enjoyable.

Bach’s Brandenburg Concerto No. 4 in G was an uplifting end to the program. The modern once again conversed with the Baroque when the traditional recorders were replaced with modern flutes. Although this seemed strange at first, soloists Barbara O’Brien and Kyra Kester played with a pleasing, mellow quality that functioned well next to Brault, his modern violin strung with baroque “gut” strings. The final Presto provided a stirring finish to an inspiring concert of dialogues between old and modern conventions and musical traditions.
Published on ClevelandClassical.com January 19, 2016.

Jackson began the program with a recitation of Langston Hughes’ poem “Helen Keller” — the first of five poems by Hughes that served as interludes between each piece on the first half. END_OF_DOCUMENT_TOKEN_TO_BE_REPLACED

Pianos with pins and tape on strings, a bass drum and tam tam, crotales, Almglocken, and vibes. Microphones were hooked up all around the instruments. The feed was sent to speakers around the room. Lighting designer Nicholas Houfek hung incandescent globes over the arrangement of instruments from thin black wires stretching across the beams. END_OF_DOCUMENT_TOKEN_TO_BE_REPLACED

From the podium, Elim Chan set an ambitious tone for the evening. The rising star conductor, here in her Cleveland Orchestra debut, has a commanding style, and every twist and turn in Saturday’s performance tracked closely with her baton. END_OF_DOCUMENT_TOKEN_TO_BE_REPLACED