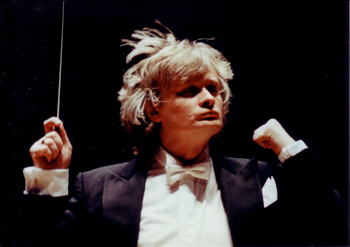 On Saturday, June 13 at 7:30 pm in the Ohio Theatre at Playhouse Square, Opera Circle will present Puccini’s tragic love story, Madama Butterfly, under the direction of Maestro Nowak, who will be making his Opera Circle debut. The cast will include soprano Dorota Sobieska as Cio-Co San, mezzo-soprano Christina Carr as Suzuki, tenor Isaac Hurtado as B.F. Pinkerton, and baritone James Binion as Sharpless. The fully-staged production will be sung in Italian with English subtitles.

Madama Butterfly tells the story of B.F. Pinkerton, an American naval officer posted in Nagasaki, Japan, who in 1904 arranges with the marriage broker Goro to lease a house — along with a pretty young wife. Both deals may be cancelled on a month’s notice. The American consul, Sharpless, warns Pinkerton that the girl may not take such a casual view of this marriage. Pinkerton is unconcerned; for now he is entranced by the girl nicknamed Butterfly — but he drinks to the day he will wed “in real marriage a real American wife.” Read the full Opera Circle synopsis here.

What is it about the opera that audiences find so attractive? “Of course the wonderful music is one of the main reasons the opera is so popular,” Nowak pointed out. “But there is so much human tragedy in the story, which is something that moves everybody — it speaks directly to the heart. It’s a conflict between two different worlds, and the different perspectives from those worlds.”

Grzegorz Nowak, who currently serves as the Permanent Associate Conductor of the Royal Philharmonic Orchestra in London — a position he was promoted to after serving for seven years as the Orchestra’s Principal Associate Conductor — has enjoyed success on the podiums of orchestras and opera houses on both sides of the Atlantic. Although he knew from an early age growing up in Poland that he wanted to be a musician, his decision to become a conductor came much later.

“I come from a family of many generations of organists, including my grandfather and my father, so when I was a little boy, I always thought that I was going to be an organist as well. For many children, one day they want to be a policeman and the next day a fireman, but I was the boring kid in that from kindergarten on, I only wanted to be a musician.”

At the age of six Nowak began playing the violin, which remained his primary instrument until he entered university, when, in addition to studying violin, he added conducting and composition. He even played in the La Scala orchestra for one season. “For a while I thought I would be the concertmaster of an opera orchestra, but as soon as I graduated from the Music Academy in Poznań, I was given the task of creating an orchestra in the North of Poland, and that was that.”

Nowak furthered his conducting studies in North America after being awarded the first ever doctorate fellowship at the Eastman School of Music. “From there I went twice to Tanglewood. Everybody was there at that time — Bernstein, Ozawa, Leinsdorf, Abaddo and Mehta — so I learned from the best.” Since then Nowak has served as Music Director of the Edmonton Symphony Orchestra, the Polish National Opera in Warsaw, and the SWR Radio Orchestra in Germany, to name a few. Today, in addition to his position in London, he also serves as the Artist-in-Residence at Florida International University in Miami.

I asked the Maestro how he would approach the task of attracting audiences to opera. “One way is producing operas that will attract a large crowd, and Madame Butterfly is one of those. But you also need to promote operas that are being written today, so it doesn’t end with Puccini and Verdi. When I was the director in Warsaw, I conducted the country’s first performance of Simon Boccanegra. It had never been staged in Poland, and it was such a privilege to conduct the nation’s premiere of a work by Verdi.”

When it comes to new operas, he emphasized the fact that many works were not truly appreciated at the time of their premieres. “Take Wozzeck. It is a difficult piece to produce, but it is having more and more presence these days, so it’s something that appeared, then disappeared, and is now reappearing.”

Before we ended our talk, the conversational Nowak shared one of his favorite conducting stories. “A few years ago I received a phone call from the director of Opera Pozan in Poland. He wanted me to come and conduct a concert with Plácido Domingo. When he told me the date, I said that I was sorry but I would be conducting in Berlin that day. He asked me the time of the concert, and I told him it was at 4:00. He said that his concert wasn’t until 7:00. I told him there was no way I could make it to Pozan by 7:00. He called me back five minutes later and told me that he had spoken to a very wealthy man who would provide a limo to pick me up after the concert in Berlin and take me to a private airport where I would fly on his private plane with Domingo from Berlin to Pozan. And that is exactly what happened, and we performed the concert at 7:00.”