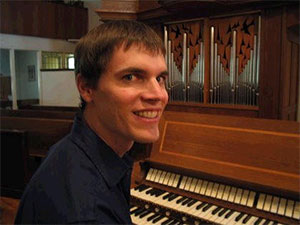 It all started with a disastrous fire on August 28, 2014 that destroyed Lorain’s First Lutheran Church and its historic John Brombaugh organ. Brian Wentzel, the church’s music director, was crushed by the loss. While waiting until a new church and organ could rise from the ashes, he decided to dedicate some of his time to learning all 48 preludes and fugues of Johann Sebastian Bach’s Well Tempered Clavier.

Wentzel will present them in a series of six concerts over the next three years on the Rudolf von Beckerath organ at Trinity Lutheran Church in Ohio City. The first performance will take place on Trinity’s “Music Near the Market” series on Wednesday, October 14 at 12:15 pm.

“Without an organ, one of the things I immediately had to deal with after the fire was what to play for preludes and postludes,” Wentzel said in a recent telephone conversation. “I had been thinking of learning the WTC for a long time, but had never gotten around to it. This seemed like the perfect opportunity, so I decided to learn one prelude and fugue a month, figuring it would take me about four years to get through the 48. Hopefully by that time we’d have a new instrument.”

At this point, Wentzel is right on schedule, having made his way halfway through Book I. “I’m currently working on the f-sharp minor pair, no. 14. I really didn’t know the collection very well. As a piano student, I’m sure I played the C Major prelude at some point, but I’m not sure I ever learned the fugue. As an organist, the WTC wasn’t on my radar, so a lot of it is a journey of discovery for me.”

Wentzel hadn’t originally thought of performing them on the organ, until Florence Mustric invited him to play one of the Trinity Lutheran concerts this fall. “On a whim, I brought the WTC along when I went to practice. I started trying out some preludes and fugues on the Beckerath, and I don’t think I played anything else the whole time I was there. They really came alive because there are so many beautiful sounds on that organ. I somewhat hesitantly approached Florence and said, ‘I know you asked me to play one concert, but how about six over the next three years?’ She graciously agreed.”

The project set Wentzel to further investigate the “48.” First, he discovered Robert Marshall’s book, Organ or Clavier. “One of his major arguments is that Bach very intentionally kept to the four-octave compass from C to C, and did not write for pedals or multiple manuals, so that The Well Tempered Clavier is for the abstract clavier or for the keyboard in general. Of course there are some pieces that work better on organ — those with long pedal tones — and the end of the a minor fugue is unplayable with manuals alone.”

“Another thing that struck me is the similarity between WTC pieces and organ works in the same key. The E-flat with its big fugue in the prelude really reminds me of the ‘St. Anne,’ and the e-minor fugue closely resembles the theme of the ‘Wedge.’”

Wentzel later learned that in 19th century England, the WTC was widely regarded as an organ work. “They lacked the full pedalboards to play Bach’s large organ works. One person wrote that the C major prelude was an archetypical organ piece.”

Brian Wentzel is taking care to present the WTC in its most approachable form on his Trinity concerts. “There are only so many preludes and fugues you can sit through in a row. I should be able to fit about eight of them into that 30-40 minute period, and that should be a perfect amount. On October 14, I’m playing the first eight, but not in order. I’ve tried for a more natural arrangement. In most cases, I’m playing minor pieces followed by the major ones.”

Since the fire, Wentzel has had to adapt to interim arrangements for Sunday services. “I’ve been playing on an upright Yamaha in a middle school cafeteria, but I go to Oberlin to practice once or twice a week and I visit other instruments as well — it encourages me to get out.”

But good news has recently arrived. “The church is going to rebuild on a new site and we’re currently negotiating another piece of land, after which the building will take about a year and a half,” he said. “And just last month, we signed a contract with Paul Fritts of Tacoma, Washington, to build a two-manual instrument that should arrive in the fall of 2018 — just about when I’m finished with the 48.”

It might seem that there’s not a lot left to discover after three decades of experience with the Red Priest’s charming and evocative score, but this performance boasted a secret weapon: the young Spanish violinist Francisco Fullana, now the Orchestra’s artist-in-residence, whose affecting personality and easy virtuosity raised the solo part a quantum leap above the merely extraordinary. END_OF_DOCUMENT_TOKEN_TO_BE_REPLACED

END_OF_DOCUMENT_TOKEN_TO_BE_REPLACED

The Cleveland Orchestra’s second performance of the new season on Sunday afternoon, October 17 at the newly renamed Mandel Hall at Severance Music Center was just such an occasion. If the ensemble’s return to public concerts under the baton of Franz Welser-Möst wasn’t enough reason to light a bonfire, the Cleveland debut of a new work written for one of the Orchestra’s most popular soloists, and the swan song of one of its longest-serving members added extra fuel to the celebration. END_OF_DOCUMENT_TOKEN_TO_BE_REPLACED