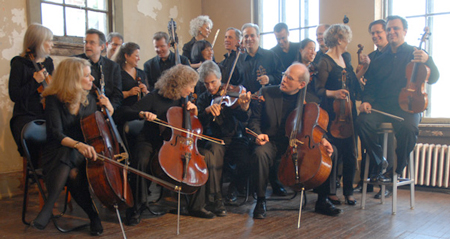 Founded in 1972 by Julian Fifer and a group of like-minded musicians, the Grammy Award-winning Orpheus Chamber Orchestra has been recognized for performances that combine the intimacy and warmth of a chamber ensemble with the grandness of an orchestra.

Most importantly, the conductorless ensemble has been recognized for its collaborative leadership style in which the musicians collectively decide on their interpretations of musical scores. On Saturday, August 27 at 8:00 pm, the Orpheus Chamber Orchestra will make its long-awaited debut at Blossom Music Center with a program featuring Johann Sebastian Bach’s Brandenburg Concertos Nos. 3, 5, 6, and 2.

“We’re looking forward to our Blossom engagement,” violist Dov Scheindlin said during a recent telephone conversation. “We have several members who grew up in Cleveland, and many members who attended the ENCORE School for strings and have very fond memories of Blossom, so we’re excited to be making our debut at this iconic venue.”

When asked about the program, Scheindlin said that although he has never been to Blossom, he’s certain that the open-air structure of the pavilion and the beautiful lawn will make a wonderful setting to hear Bach’s music. “All the Brandenburgs are so different — each one is written for a totally different ensemble, and each one features solo instruments. Bach really wrote them to show off all of the different things he could do, and that’s what Orpheus will be doing — showing off all the different things we can do.”

The program will begin with the ten-minute Concerto No. 3 scored for three violins, three violas, three cellos, and basso continuo, and will be followed by the Concerto No. 5, a showpiece for the harpsichordist along with solo violin and flute. “The solo harpsichord and continuo duties will be handled by Bradley Brookshire,” Scheindlin noted. “He’s a terrific musician who has worked a lot with Harry Bicket, and he’s played a lot of continuo for the Metropolitan Opera.”

Scheindlin will take a solo turn himself during Concerto No. 6, for two viole da braccio, two viole da gamba, cello, violone, and harpsichord. “It’s an amazing piece that is full of rich lower sonorities. After some intense negotiations, it was decided that I would play one of the solo viola parts.”

The evening’s program will conclude with the festive Concerto No. 2 that features solo parts for the unlikely combination of trumpet, flute, oboe, and violin.

In March 2007, the Orpheus Chamber Orchestra earned the distinction of winning the Worldwide Award for the Most Democratic Workplaces sponsored by the Washington, D.C.-based WorldBlu, Inc., although Scheindlin pointed out that democracy is not always easy, nor is it always the most efficient way to conduct the business of rehearsing.

“All of us have played in conducted ensembles in which all of the information flows in one direction: from the maestro to the musicians,” the violist said. “That can be satisfying if you have a wonderful, gifted, and brilliant maestro, although even in those cases there will be times when you feel like your expertise is being left on the table. What’s great about Orpheus is that we draw on the knowledge and experience of all of our players, so the musicians have full accountability for everything that goes on. They’re engaged in the process of creating interpretation and empowered to speak out when they have an idea — and are called upon to support the decision of the group.”

“One of the early ideas of Orpheus was that it would be an ensemble that played orchestral repertoire with the same engagement that musicians play chamber music,” he said. “Many of our members come from a chamber music background, so we’re all used to taking accountability for our own parts. We’re all listening, and we all know the score from top to bottom, so we’re not relying on a visual stimulus from a podium.”

Orpheus Chamber Orchestra has trademarked this method of operation. The Orpheus Process™ places democracy at the center of artistic execution. The method has been studied at Harvard and at leadership seminars for Morgan Stanley and Memorial Sloan-Kettering Hospital. The Orchestra most recently participated in a leadership seminar for IBM.

“We held a rehearsal, and one of our musicians was there to interpret what was happening for those who didn’t have a musical background,” Scheindlin explained. “We try to point out that rehearsing is not just about making decisions, but listening to others. One of the things people said afterwards was that they were surprised by how frankly we talked to each other — in their world they wouldn’t just bluntly say what they think of somebody else’s work. But musicians constantly talk to each other that way. And we don’t take it personally because nobody is doing it to one-up someone, we’re doing it to improve the finished product. I think people in the business world are fascinated by that because many companies are laden with hierarchies that simply don’t allow the junior people to communicate to the senior people.”

While Orpheus is guided by its democratic principles, there is still a certain level of hierarchy. For example, each piece of music is assigned to a group of players who hold preliminary rehearsals and make decisions about things such as bowings and tempos. “They create a set of starting principles, but once the whole group is together, every decision is up for discussion.”

Orpheus’s membership also elects three artistic directors, each of whom serve three-year terms. “Obviously it would be a little unwieldy to have 30 people discussing every artistic issue — like what program to pick, or what bus to take,” said Scheindlin, who is currently one of the artistic directors. “The terms are staggered, so everyone gets a chance to be in the position of making artistic decisions that are too cumbersome to be made by the entire group. One of the great things is that so many in the orchestra have served as an artistic director and they understand the challenges that are involved.”

Scheindlin added that as lovely as Orpheus’s guiding principles are, it wouldn’t be worth it if they weren’t matched with results. “We’ve been very gratified that over more than 40 years, audiences and players have loved what we do. We’ve brought repertoire that used to be performed only by larger forces into the chamber music arena. We’ve also broadened the repertoire by commissioning new works, bringing in older works that are less well-known, and adapting works that were originally written for other combinations of instruments.”

END_OF_DOCUMENT_TOKEN_TO_BE_REPLACED

Then, you heard all the qualities that make for a stunning soloist. Winner of the 2013 Cleveland International Piano Competition, Khristenko was back in town this month for a recital in Piano Cleveland’s summer series, Piano Days @CLE. And he couldn’t help but revel in the spotlight a little, even as he settled into a more collaborative role at the keyboard for his program, “Stanislav and Friends.” END_OF_DOCUMENT_TOKEN_TO_BE_REPLACED