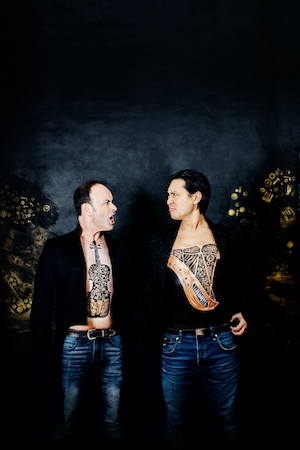 My recent conversation with pianist Hyung-ki Joo began with some pushback — beginning when I said that it was exciting to talk to him. “Well, you don’t know that,” he joked. “You haven’t talked to me yet.”

A sound argument. So I explained that I was excited about the opportunity to speak to someone like him: a musician who is also a comedian.

He replied that although he was flattered, he and violinist Aleksey Igudesman — who together are Igudesman & Joo, a musical-comedic duo that will perform in Hanna Theatre at Playhouse Square on Thursday, July 28 at 7:30 pm as part of Piano Cleveland’s PianoDays festival — don’t really think of themselves as comedians.

“We are musicians first and foremost, and everything that we do comes from the music first and foremost. It’s about having fun with music” — something that comes across not only in their playing, but also in the physical and linguistic humor they bring to it.

Early experiences going to classical music concerts left both of them underwhelmed. “I always felt like there was nobody who loved music more than me, and I still feel that way,” Joo said. “But when I was going to concerts as a teenager, I found myself being annoyed, frustrated, or bored, and wanting to leave.”

It wasn’t necessarily the performance, but the ceremony around it: “people dressing up in a penguin suit, walking onstage as if they’re god’s favorite creature, not talking to you, and just being above you — ‘Don’t do anything while I play my Beethoven.’

“That stifled the music for me. It alienated the joy. And I thought, well, if I’m the person who loves classical music the most in the world, and I want to leave, then we have a problem — and Aleksey felt that way too. So we said to ourselves, we probably can’t change the world, but we can at least create programs and concerts that we would want to go to.”

Learning about how concerts were presented during the 18th and 19th centuries was an eye-opener. “They were just wildly different from the late 20th century,” Joo said. “They seemed more in the spirit of what we believe classical music concerts should be — events, experiences, celebrations of joy, of life.”

In terms of rethinking what a concert could be, Joo drew a parallel to the way that some contemporary filmmakers have interpreted Shakespeare. Baz Luhrmann’s 1996 Romeo + Juliet, for example, put a mafioso twist on the conflict between the Montagues and the Capulets, complete with guns, car chases, and Leonardo DiCaprio.

“There were plenty of purists who said, “Oh no, that’s not how we do it in the Royal Shakespeare tradition!” Joo said, putting on a posh English accent. “But screw that. These kinds of movies attracted whole new generations, and meant that Shakespeare could be relevant to the 21st century. And that’s what we hope to do with our concerts — just to make music that we love a little more accessible, with elements of fun and humor, and without all the stuffy ceremony.” 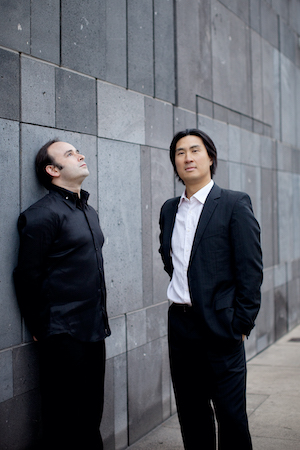 Speaking of “more accessible,” the show that Igudesman & Joo will bring to Cleveland, titled “Play It Again,” takes that phrase to heart in an unexpected way. This concert of all encores makes use of the made-up language of Joodesmanish, an amalgamation of many different languages, such that people of all different tongues can grasp it.

It’s something that was born out of convenience. Over their years of shows and their travels around the world, Joo and Igudesman have made a practice of adapting their shows to the local language. Fortunately they’re skilled linguists with a lot under their belt, but some of their travels have required them to translate their shows into a language they don’t know at all, and learn their lines phonetically — a painstaking process. “And then if we make a slight improvement, we have to change all the other versions,” Joo said.

For “Play It Again,” they took a different approach. “We said, screw it, let’s not go through all of that. Let’s create a sort of Esperanto — a multi-lingual, gobbledigook language where everyone can kind of clench onto at least a few key words.” The duo went as far as to include a few lines of Klingon.

Playing with languages can be a sensitive subject, and Joo made a point to say that he and Igudesman are not making fun of any cultures. “We see it as paying homage to all these countries that have given us homes over the years, and where we have lots of loyal audiences.”

While speaking fluently, we can be sure, in Joodesmanish, Igudesman & Joo will be playing one encore after another — an idea that came from their feeling that encores are often the most memorable aspect of a concert. “Partly because they’re the last thing that you hear,” Joo said. “Like at a restaurant where they give you a little bonbon at the end — the chocolate that makes you go, ‘Wow, I’ve got to come back.’”

Having learned a number of encores over the years that they felt were gems in and of themselves, they thought, why not make a whole concert out of them?

“So the whole show actually starts at the end,” Joo said. “We bow as if we’ve been through a two-hour tornado — sometimes we even put water on our faces and in our hair to make it look like we’re sweating. We say, ‘Goodnight, get home safe,’ and we walk out. And audiences get it almost instantaneously — as soon as we walk off, they start clapping in unison or shouting, ‘Bravo, encore, encore!’”

Watch a video of their concerts on YouTube, and you’ll see that chemistry is a huge part of their success. Asked about their creative partnership, Joo used the term ping-pong relationship. “One person has an idea, then the other person hits the ball back and says, ‘What about this?’ And the rallies go back and forth until we end up with what we have.”

That’s a far cry from their first meeting at age 12 at the Yehudi Menuhin School in England. “It was hate at first sight,” Joo said. “He used to actually beat me up, and the way we became friends was that I offered him a portion of fish and chips — true story. He was hesitating about whether he should beat me up, or take the free food. But when you’re in an English boarding school, the quality of the food is so dire that I think fish and chips seemed like caviar at the time for him. So he took the food, and we sat in silence at the beginning — it was like the Cold War. But after a while the chips and the fish broke the ice. As I say, he battered me, and I gave him battered fish.”

They’ve since become best friends — but not without a note of aggression. “I think because of that fighting at the beginning, there’s still a germ of it left. There are still tensions, like in any relationship, but we’re getting wiser and better at dealing with them.”

The vast majority of the time, those struggles lead to better ideas. “Ping pong becomes more like boxing,” Joo said. “But it all ends peacefully. So what you see onstage is actually a parody of how we have been in reality — but better we play it out onstage than in real life. So in a way, it’s art imitating life, you know?”

Jackson began the program with a recitation of Langston Hughes’ poem “Helen Keller” — the first of five poems by Hughes that served as interludes between each piece on the first half. END_OF_DOCUMENT_TOKEN_TO_BE_REPLACED

Pianos with pins and tape on strings, a bass drum and tam tam, crotales, Almglocken, and vibes. Microphones were hooked up all around the instruments. The feed was sent to speakers around the room. Lighting designer Nicholas Houfek hung incandescent globes over the arrangement of instruments from thin black wires stretching across the beams. END_OF_DOCUMENT_TOKEN_TO_BE_REPLACED

From the podium, Elim Chan set an ambitious tone for the evening. The rising star conductor, here in her Cleveland Orchestra debut, has a commanding style, and every twist and turn in Saturday’s performance tracked closely with her baton. END_OF_DOCUMENT_TOKEN_TO_BE_REPLACED