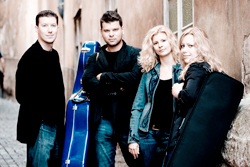 Since winning the Paolo Borciani competition in Italy in Spring 2005, the Pavel Haas Quartet has established itself as one of the great chamber ensembles of today. On Tuesday, April 8 beginning at 7:30 pm in Plymouth Church, the quartet returns to Cleveland for a performance for the Cleveland Chamber Music Society. The program includes Leos Janáček’s Quartet No. 1 “Kreutzer Sonata”, Benjamin Britten’s Quartet No. 2 in C, op. 36 & Beethoven’s Quartet in e, op. 59, no. 2. At 6:30 pm a pre-concert lecture will be given by Costa Petridis. You can read Daniel Hathaway’s discussion with Petridis here.

In addition to their Cleveland performance, the Pavel Haas Quartet’s current US tour includes stops in San Francisco, Tucson, Salt Lake City, Phoenix, Toronto, Durham, Atlanta and Cincinnati. “Everything is going very nicely, but it is quite busy,” violist Pavel Nikl said by telephone from his hotel in South Bend.

Nikl said he looks forward to performing their program in Cleveland, especially the Janáček, which he thinks it is one of the best compositions in their repertoire. The work was inspired by Leo Tolstoy’s novella The Kreutzer Sonata. “Janáček was captivated by this story about a young lady and her husband and another young man who plays the violin,” Nikl said. “I think the reason Tolstoy titled the story The Kreutzer Sonata is because the violinist played Beethoven’s sonata with the young woman.”

Nikl went on to explain that the husband becomes jealous which consumes him and eventually causes him to murder his wife. “It is difficult to explain and much better to read it, but Janáček was captivated by the jealousies and he did put the sense of the story in his string quartet.”

Nike also said that he and his colleagues had the good fortune of being able to study Janáček’s work with Smetana Quartet violist Milan Skampa “He researched Janáček’s music for 50 years and he explained to us how the characters were portrayed in the music. It is easy to rec
ognize the motives of jealousy, destiny and the young lady. I think if it were explained, audiences can easily recognize these motives.”

Nikl said he finds it hard to coach the quartet during a master class situation. “Janáček was fascinated with Moravian music and he used Czech words in the score to explain the motives. So if one does not understand the Czech language and Moravian folk music it is quite difficult to explain to students. But again if explained, audiences will understand and be fascinated as well.”

During their most recent performance for the Chamber Music Society the Pavel Haas performed Benjamin Britten’s Three Divertimenti. Tuesday’s concert includes another work by the composer, the String Quartet No. 2. “This time the music of Britten is completely different. The Divertimenti are three very short character pieces but the second string quartet is a very big piece of music that for my taste is something special that I cannot compare to anything else.”

Nikl said he finds the quartet to be full of colorful music, challenging technical passages and ends with a hope in the future. “It is a nice piece of music that audiences always enjoy and so do we.” 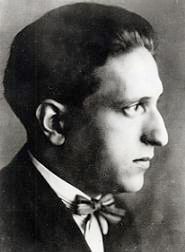 The Quartet took their name in honor of the Czech composer Pavel Haas (above), who was imprisoned at Theresienstadt and later died at Auschwitz. But what led them to this decision? “It was actually a coincidence,” Nikl said. “We formed the quartet in 2002 and we were trying to find the right name which is not easy. But our friend who is a violinist gave us a recording of Pavel Haas’s second string quartet. He and Haas are both from Brno in the Czech Republic so he knew his music and told us how great it was.

“We listened to the recording and loved it. It is beautiful music. So we thought, why not take the name of Pavel Haas? Otherwise, like us, many people might not know his name or his music, which would be a pity. Haas’s daughter still lives in Brno and we asked her if we could take the name after her father and she was very happy and proud.”