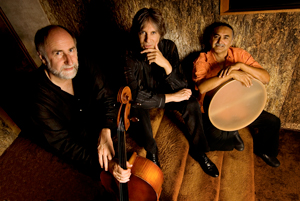 “I have increasingly come to value our extraordinary tradition of classical music that we have spent our lives listening to and being moved by,” cellist Eugene Friesen (left) told us by telephone. “The range of musical sophistication that we have been exposed to by listening to it and the range of human emotion that is expressed in it I think are deep treasure chests for us to draw upon as creators.”

On Friday, September 20, as part of the KeyBank Friday’s @ 7 series at Severance Hall, Eugene Friesen will be joined by Trio Globo colleagues Howard Levy and Glen Velez for an after-party performance of contemporary music that is rooted in jazz, classical, sacred music and global rhythms. The evening begins at 6:00 pm in Reinberger Chamber Music Hall with a pre-concert performance by pianist Gregory Wang with special guest Peter Takács. At 7:00, Fabio Luisi will lead The Cleveland Orchestra in performances of Schumann’s Spring Symphony and Beethoven’s Piano Concerto #5 (Emperor) featuring Hélène Grimaud.

“We really do come from very different musical backgrounds,” Friesen says of his Trio Globo colleagues, “but when I get together with Howard and Glenn I just feel this extraordinary loving respect that goes across our traditions and our various approaches.” Pianist and harmonica player Howard Levyhas worked with Bela Fleck and the Flecktones, Kenny Loggins and Paquito d’Rivera. and percussionistGlen Velez, in addition to being the “founding father” of the modern frame drum movement, has collaborated with the Paul Winter Consort, Steve Reich, Maya Beiser and Pat Metheny as well as numerous symphony orchestras. And Friesen has had his own long association with the Paul Winter Consort.

Friesen says that these approaches do affect the group’s creative process. “Since all three of us are composers, we’ve learned to not expect anything when we bring in something we have written because everybody will bring something personal and organic to the development of their individual parts, and a great sensitivity to the intention of the composition.” That’s a process that Friesen jokingly calls improve–isation. “You can bring in just a sketch and these guys will breathe life into it.”

When speaking with Eugene Friesen you get the sense that he is still fascinated with the possibilities of creativity, “It never fails: when you give a musician a specific little tool to play with, whether it’s a pentatonic scale or an interval or an interesting new rhythm, in playing with it, they will adapt it and come up with something original very quickly. I have come to feel that it is our natural birthright as creative beings, that we will tend to create our own sonic signature if we’re given the chance.”

So how did Friesen become a musical omnivore long before the term was fashionable? “I grew up in California playing the cello but really loving pop music. Even as a kid I started experimenting with the cello. I even formed my own band. When I got to college I put together a thirteen-piece group called the Modern Furbearing Orchestra. It had cello, violin and viola, a full rhythm and horn section and a lead singer. We were very symphonic for a rock band. Groups like the Electric Light Orchestra and Tower of Power were our models.”

After college Friesen found himself at the Yale School of Music, “However, when I was a student in California around 1973, Paul Winter came through doing a concert. I went to a workshop he was giving and I had a great time improvising with them.” What Friesen didn’t realize was that Paul Winter was also impressed with him. “He wrote down my name and when he needed a cellist in 1978 he called all over California trying to find me. It turned out that I had just graduated from Yale, only a half hour from where he lived in Connecticut.”

Because Winter’s music is largely based in improvisation, a craft not often associated with classical music, did he have any problems fitting into the group? “I think I had an instinct for free improvising. Some of my background in contemporary music and kind of exploring different sounds on the instrument opened up some possibilities, so I could play it abstractly. But what’s been more difficult has been learning to play by ear over more sophisticated harmonics. So that has been my work in recent years.” But he quickly says that as a teacher he has enjoyed working with classically trained musicians — as he puts it, “to play from the heart instead of from sheet music and to illuminate the pathway into becoming more proficient in improvising in a lot of different contexts.

Friese adds that the most difficult part is getting people to play off the page. “Improvisation actually comes pretty naturally to people. I think the most difficult part is just getting them to play the first notes. The one thing I like to remind all of us classically trained players is that we tend to approach improvisation with kind of a chip on our shoulders. We think, well, I don’t play bluegrass, I don’t play blues, I don’t really know what I’m doing when I’m improvising. But I actually think that classical players bring a tremendous amount of learning, of listening and of feeling into improvising and it’s a real thrill just to give them permission to explore the elements of music creatively.”

Another of Friesen’s interests is the evolution of classical music and he asks, where is it going and what needs to happen? “In a nutshell I would say that Trio Globo is a good example of creating a repertoire that really speaks to the diversity of our population. Listening to a Mahler symphony will always be a temple of listening. But our [Western classical] music developed in a very specific economic culture and there is so much great music in the world. You think of the music from the Middle East, different parts of South America, Africa, Asia that really developed in very different kind of economies and cultures and I don’t feel that there is any reason, with something like a symphony orchestra — which I think everybody would have to admit is the grandest imperial instrument — that we can’t use the genius and the craft the we’ve learned from centuries of great orchestra music and start folding in some of this music of different cultures.”

Eugene Friesen offers his thoughts on the state of classical music in a blog post from March 25 of this year. The post is reprinted with the permission of the author.

I’m hearing of more and more unusual contexts for classical music: Beethoven’s “Ode to Joy” in a town square flash mob, chamber music in bars, solo Bach electrified in a rock club. Bringing the music to the people is not a new idea, but it’s being pursued with a passion all over. And it’s refreshing to see so many musicians willing to make a break with tradition, to take themselves a bit less seriously, and let their favorite music speak for itself on Main Street.

For way too long, musicians have furthered the notion that the great composers are deities. We forget that these guys were musicians, they had sometimes vicious and raunchy senses of humor, untidy abodes, work stations and personal lives, and really had to figure out how to make money. In addition, they chose a creative vocation that is rife with failure.

It’s easy to look at a Schubert song and believe that this came into musical life without effort or strain. Inspired, yes, but also crafted with an eye on the public and an ear to the publisher. And the pathway to a work of art is strewn with all matter of personal and artistic roadblocks that must be overcome. It’s a messy business, creativity. And we performers need to get messy too.

I believe there will always be great symphony orchestras, but it’s not obvious that there will be. Just as Mozart, Haydn, and nearly every great composer you can think of created music with roots in folk music, we are in desperate need of more Gershwins and Bernsteins to create new, exciting and emotionally satisfying orchestral music that everyone understands intrinsically.

Rock violinist Mark Wood has made the point that musical innovations of the last fifty years did not happen in academia, but in pop music. So too, the institutions – universities, symphony orchestras, etc. – will most likely not be the sources of innovation and cultural change in musical performance. That will happen through a thoroughly messy – and potentially joyful – process of trial and error.

In the meantime I will enjoy every Bach suite played as a fiddle tune. It’ll be great to hear a Joshua Bell in the subway, a Mozart Divertimento outdoors at sunrise, a flute solo in a reverberant lobby. These are the sounds of a culture changing.

Although the Museum had just opened again earlier in the week, in-person concerts were not on the agenda. Instead, Classical Piano Series director Emanuela Friscioni and her husband Antonio Pompa-Baldi invited a virtual audience into their handsome, sun-dappled music room for an intimate, exquisitely-played program of four-hand piano works by Schubert and Debussy topped off with the premiere of a new work by their fellow Italian, Luca Moscardi. END_OF_DOCUMENT_TOKEN_TO_BE_REPLACED

END_OF_DOCUMENT_TOKEN_TO_BE_REPLACED

Northeast Ohio’s Les Délices has long been that rarest of beasts: a world-class organization so proud of its region (ours) and repertoire (distinct niches in pre-1800 music) that it never tries to be everything to everyone, paradoxically making a strong case for a broad, curious international following. In the December episode of its SalonEra series, the ensemble embraces its strengths and community to marvelous effect. END_OF_DOCUMENT_TOKEN_TO_BE_REPLACED