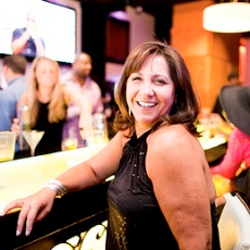 Brazilian vocal sensation Kenia wants to remind audiences of one thing about Friday’s Cleveland Orchestra Friday’s @ 7 post-concert: “Remember to bring your dancing shoes,” she exclaimed. “People should expect to take a little trip to Brazil and I’d love it if they would close their eyes and find themselves transported to Rio in the midst of Carnival.”

On Friday, April 11 in Severance Hall, The Cleveland Orchestra continues its popular Fridays @ 7 series. The evening begins at 6:00 pm with a Pre-Concert in Reinberger Hall featuring Classical Indian Music with Steven Gorn, bansuri bamboo flute, and Samir Chatterjee, tabla. At 7:00 pm, Giancarlo Guerrero leads the Orchestra in a performance of Prokofiev’s Classical Symphony and Rachmaninoff’s Piano Concerto No. 3 with Yuja Wang as soloist. Then, on to Festa Brasileira…Carnival!

“The show is all about revisiting Carnival from the 1940’s and 50’s,” Kenia told us during a recent telephone conversation. We’ll be playing some of the marches and some of the sambas from those days. It’s away from the bossa nova but something new, exciting and very upbeat.”

Kenia will also be joined by some of her favorite collaborators. “The guys in the band are musicians that I have played with many times. Trombonist Jay Ashby, who teaches at Oberlin, is going to be leading us. Klaus Mueller, who’s based in New York, is a fabulous piano player, and Adriano Santos will be on drums — we’ve done a million gigs together. The bassist, Kipp Reed, who is from Cleveland, I’ve also played with for a million years. And with Lucas Ashby and Marcus Santos on percussion it’s going to be great! It’s a good bunch of guys and we’re really excited about it.”

I asked Kenia why she thinks Brazilian music always seems to put people in a good mood? What about the music is so uplifting? “As a native Brazilian and having grown up with the music, I think that is a question I should be asking you! Again, I grew up with it, and it is uplifting to me. But my fear is that if you over intellectualize too much, in my mind it can become a little too academic. And it loses the magic in a way. But you’re right, there is something there.”

After more conversation Kenia said she believes that something has to do with the music’s pulse. “The pulse to me feels like it beats along with your heart and puts everything in sync. And because of that, your heart kind of settles. That’s my impression. But technically, I really don’t know what it is. It transports me and it’s great to know that it transports others as well. And I believe that that’s what music is about. It’s a healing thing.”

Born in a suburb of Rio de Janeiro, Kenia began singing in church. “I am the baby of five girls and we were all musically inclined. We took piano lessons and played guitar, so I grew up with music. But I started singing in church with a youth group and I really loved it. I also had a couple of very close friends and we would get together after school and grab the guitar and sing a few songs.”

Kenia also recalled her days of singing with her high school friends at festivals. “This was back in the early 1970’s when the music festivals were very big in Brazil. And on a much smaller level the high schools also ran festivals. I participated in several of them, singing compositions by some of the people I went to school with. It’s interesting because from that group almost all of us ended up going into the music business, some in the business end and some as musicians. I haven’t thought about that for a while, but yes, most of us stayed with it.”

After spending time in the recording end of the business, Kenia eventually made to decision to pursue her own singing career. And although she knew many producers, “to them, I would always be the secretary who decided to sing. And forever it would have been like that.” I had been an exchange student in the United States and had a wonderful family—in fact to this day we are still close. So I gave them a call and told them my time had come, and can I crash there for a few days? Obviously they welcomed me back.” Soon after arriving in the New York City area Kenia quickly connected with other Brazilian musicians and as she said, “the rest is history.”

Now based in Pittsburgh, Kenia owns her own record label and entertainment company, Mooka Entertainment. “It’s a lot of fun. We do a lot of educational and cultural events as well. It’s an engaging thing for me to do.”

Published on ClevelandClassical.com April 8, 2014
Click here for a printable version of this article.
Return to the website.

It might seem that there’s not a lot left to discover after three decades of experience with the Red Priest’s charming and evocative score, but this performance boasted a secret weapon: the young Spanish violinist Francisco Fullana, now the Orchestra’s artist-in-residence, whose affecting personality and easy virtuosity raised the solo part a quantum leap above the merely extraordinary. END_OF_DOCUMENT_TOKEN_TO_BE_REPLACED

END_OF_DOCUMENT_TOKEN_TO_BE_REPLACED

The Cleveland Orchestra’s second performance of the new season on Sunday afternoon, October 17 at the newly renamed Mandel Hall at Severance Music Center was just such an occasion. If the ensemble’s return to public concerts under the baton of Franz Welser-Möst wasn’t enough reason to light a bonfire, the Cleveland debut of a new work written for one of the Orchestra’s most popular soloists, and the swan song of one of its longest-serving members added extra fuel to the celebration. END_OF_DOCUMENT_TOKEN_TO_BE_REPLACED