“Yes, it’s hard to believe, but this is our nineteenth season and it’s the first year that CYO is older then its members,” says Contemporary Youth Orchestra founder and music director Liza Grossman. On Saturday, December 7 beginning at 7:00 pm in Waetjen Auditorium, Cleveland State University, CYO under the direction of Liza Grossman will present a concert featuring the music of John Adams, Frank Martin, Igor Stravinsky and Astor Piazzolla featuring musical guests The Oblivion Project.

The concert also includes a special performance by twenty-six young musicians of the El Sistema University Circle program in a side-by-side performance of Brian Balmage’s Burst. Grossman says that collaborating with El Sistema began actually began a couple of years ago when the program’s founder and Cleveland Orchestra violinist Isabel Trautwein began attending CYO concerts. “I am fascinated by and in awe of her commitment to bringing this kind of education to Cleveland. She even brings her kids to CYO rehearsals in hope of inspiring them,” Grossman said. “What a wonderful opportunity for us to share and inspire the El Sistema kids and the CYO members.”

Anyone who has attended a CYO concert knows that there is always a high level of fun happening on the stage. But Grossman also understands the importance of providing a musical education for her players. For example, John Adams’s Short Ride in a Fast Machine, a piece she says is necessary for their education. “Short Ride is in the top ten most performed fanfares by orchestras around the country. I saw an interview with Adams who stated that professional musicians tell him that they grew up with this piece having learned it for the first time in a youth orchestra.” Grossman describes Adams’s music as having a stainless steel sound. “Not to quote the title, but everything is very machine-like. And to be able to achieve the rhythmic precision is only going to make their overall playing stronger.”

Grossman says the choice of Stravinsky’s Firebird 1919 is also a necessary work for her players to know. “It’s a very early work that uses rhythm as melody. I chose the piece because this is the 100th anniversary of Rite of Spring but everyone was doing that. But I did want to pay homage to this incredible composer and it is our nineteenth season. And it is also a staple in youth orchestra repertoire. Young musicians need to know how to play it.”
CYO concerto competition winner flutist Peter Feher will be the soloist during Frank Martin’s Ballade. “Peter wears his natural musicianship on his face, he cannot hide who he is. And he is capable of making the entire range of the flute have purpose.” 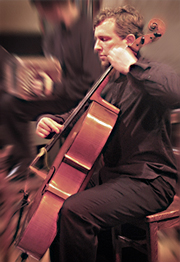 Formed in 2003, The Oblivion Project, Ken Johnston (violin), Derek Snyder (cello), Mau Quiros (piano), Erin Vaughn (guitar), Gerald Torres (bass), Patrick Graney (percussion) and Migguel Anggelo (vocals) is dedicated to exploring and performing the nuevo tango music of Argentine composer Astor Piazzolla. Oblivion Project founder and long time CYO music arranger Derek Snyder says he first heard Piazzolla’s music as an undergraduate student. “I heard Rostropovich play The Grand Tango in Orchestra Hall in Chicago. It was written for him but I understand that it took him a couple of years before he really noticed it because so many composers were writing music for him. He had no idea who Piazzolla was at first but when he started looking at the piece he thought it was really great.”

Snyder thinks that one of the nice things about Piazzolla’s music is that the instruments he used in his various ensembles produce such a range of colors. “He always used at least one string player, either violin, cello or perhaps a quartet. He used jazz guitar as well as bass and piano. He also used percussion and a lot of times he non-percussion instruments in a percussive manner – tapping on the instrument.”

Snyder points out that there is a lot of improvisation in the baroque sense of ornamentation in Piazzolla’s music and he says it is important to add the ornaments otherwise it will be missing the full flavor of the composer’s musical language. “I’ve met with the orchestra a couple of times and one of the nice things about Piazzolla’s music is that it’s easy to connect with emotionally. And with talented and enthusiastic young players it is easy, even at 9:00 am on a Saturday, to talk to them about the colors and the tension that is needed in the bow strokes. I think the students respond because they hear that when they make these subtle changes, instantly everything sounds very different. So it’s fun.”

The Oblivion project will also perform at Nighttown on Friday December 6th.

END_OF_DOCUMENT_TOKEN_TO_BE_REPLACED

The strings-only work by Berg has made relatively frequent appearances on the Orchestra’s programs. In 2021, the musicians recorded it for the In Focus series, and it appeared again on last year’s European tour. Friday’s rendition maintained the group’s characteristic light and effortless playing, each section blending as much as possible to echo the work’s original form as a string quartet. At fifteen minutes total, the piece is quite short, but the dense encoded musical meanings require some extra-attentive listening. Splitting up the three movements ensured that each one could be appreciated on its own. END_OF_DOCUMENT_TOKEN_TO_BE_REPLACED