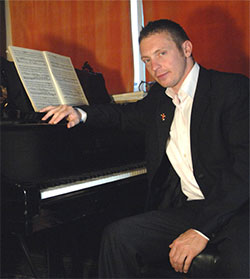 When Daniel Gortler last played on the Tri-C Classical Piano Series at the Cleveland Museum of Art in November, 2010, he was impressive in both his brilliance and restraint.

“Letting Schumann’s Symphonic Etudes, the Arabesque and ten of Mendelssohn’s Songs Without Words largely speak for themselves without putting his own personality in the way, Gortler nonetheless left his own stamp on these pieces by thoughtfully pointing up their many subtleties and placing every note as carefully as a curator would place valuable objects in an exhibition. The result was a memorable afternoon of piano music with no over-the-top pianism to be seen or heard.” (clevelandclassical.com review)

Gortler, who divides his life between New York and Israel, will be back to open this year’s Tri-C Series in Gartner Auditorium at CMA on Sunday afternoon, October 27 at 2:00 pm, with more Schumann — the Fantasiestücke, op. 12 and Fantasy, op. 17, as well as Mozart’s Fantasia in c minor. We reached the pianist by telephone in New York, where he was busy practicing Mozart for a midweek concert at Symphony Space.

Daniel Hathaway: You seem to have a special affinity for Schumann. What attracts you to his music?

Daniel Gortler: It’s not that I don’t like other composers — they’re all geniuses in a way — but with Schumann I think it’s the complexity of emotion and intellect together with structure and rhythm and feeling and passion. For me, all of this makes his music very beautiful and intense.

DH: Sometimes his music is not easy to put across.

DG: No, because of the complexity. He changes tempos and you’re not sure how seriously to take what he writes in the score. It’s hard to understand and to feel it right. Chopin is difficult to play but easier to listen to. With Schumann, there’s a lot of depth there, a lot of changes of mood.

DH: And you need to preserve Schumann’s craziness while still trying to make sense out of the music.

DG: Exactly. And sometimes he also just has beautiful, romantic melodies — that’s the other edge of his music. The contrasts between softness and intensity are very extreme.

DH: Your program in Cleveland is all fantasies. How did you choose that theme?

DG: I did a complete recital of fantasies half a year ago in Israel — the Mozart c minor, the Schumann Fantasiestücke, Chopin Fantasie, Scriabin Fantasie Sonata and the Beethoven “Moonlight” sonata, the Sonata quasi una fantasia. Then Symphony Space came with an idea to do four concerts, each one with a musical form for a theme. I chose the Fantasie and will do a different program on Wednesday than I will give in Cleveland, with a little lecture attached. It’s interesting that Schumann wrote Fantasiestücke, which I think is based very much on Lieder, which give you an image or a title like a song that the listener can concentrate on. Then the big Fantasie is a total, monumental piece in three movements — a real Fantasie. I thought it would be fun to put the two pieces next to each other.

DH: Mozart’s idea of a fantasie is very different from Schumann’s.

DG: He’s having fun. He does everything to break the form and just improvise with extreme modulations and chromaticism. He goes wherever he wants and it sounds really revolutionary for that time. I think for Mozart “Fantasie” means freedom for the imagination.

DH: How do you divide your time between New York and Israel?

DG: I go every two months to Israel, usually because there is a concert, and then it gives me the chance to see my mother. I’m an only child, and it’s a trauma for an only child to move to New York. I really have two homes, two worlds, two families. I cannot even say which is my home!

DH: And you’re always wondering where you left your glasses!

DG: The problem is with my music. You can’t carry it back and forth because it’s heavy, so I photocopy it and forget where I put it. This is annoying!

DH: Maybe it’s time to switch to an iPad.

DG: Ah! But then you cannot write on the music.

DH: I think there’s a way to do that now.

DG: Omigod! I think that’s for the next generation. I have an iPad but that’s too extreme. A score and a pencil is still a nice thing.

Jackson began the program with a recitation of Langston Hughes’ poem “Helen Keller” — the first of five poems by Hughes that served as interludes between each piece on the first half. END_OF_DOCUMENT_TOKEN_TO_BE_REPLACED

Pianos with pins and tape on strings, a bass drum and tam tam, crotales, Almglocken, and vibes. Microphones were hooked up all around the instruments. The feed was sent to speakers around the room. Lighting designer Nicholas Houfek hung incandescent globes over the arrangement of instruments from thin black wires stretching across the beams. END_OF_DOCUMENT_TOKEN_TO_BE_REPLACED

From the podium, Elim Chan set an ambitious tone for the evening. The rising star conductor, here in her Cleveland Orchestra debut, has a commanding style, and every twist and turn in Saturday’s performance tracked closely with her baton. END_OF_DOCUMENT_TOKEN_TO_BE_REPLACED