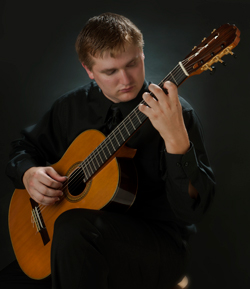 , March 17 at 3:00 pm, classical guitarist Gideon Whitehead returns to Northeast Ohio for a performance at the Happy Days Lodge in the Cuyahoga Valley National Park. Mr. Whitehead’s performance is part of The Cleveland Classical Guitar Society’s Local Artists and Rising Stars Series and is presented in conjunction with Music by Nature. The program features works by Weiss, Rudnev, Korchmar, Lansky, Koshkin and Barrios Mangoré.

Gideon Whitehead began playing the guitar at age 14 in his native Michigan. Mr. Whitehead has had much success at competitions including top prizes at the 2011 James Stroud Guitar Competition and at the 2010 and 2011 University of Louisville International Guitar Competition. He holds a Bachelor of Music degree in guitar performance from the Cleveland Institute of Music and is currently pursuing and Artist Diploma at the Curtis Institute of Music.

We reached Gideon Whitehead by telephone in Philadelphia.

Mike Telin: Thanks for taking the time to talk about your very interesting program.

Gideon Whitehead: Thanks. The program is partially taken from the Russian guitar music project I’ve have been doing for the past couple of years. All of the pieces on the first half are related to that project, as is Nikita Koshkin’s Usher Waltz on the second half.

MT: Fascinating. How did you become interested in Russian guitar music?

GW: I was looking at different repertoire and composers, and I realized that I didn’t know a lot of music by Russian composers for the guitar. So I started doing some research and discovered that there actually is quite a bit out there. Now I’ve performed three concerts of the Russian program.

MT: Is there a long history of the Russian Guitar school, if school is the correct term?

The tradition dates back to the nineteenth century with guitarist, composer and teacher, Andrei Sychra (1773–1850) who is considered to be the grandfather of the Russian guitar. So yes, there is a long tradition.

There is kind of dead spot in the literature, I think because of political things happening in Russia towards the end of the nineteenth century and beginning of the twentieth. There really wasn’t a whole lot of music being written for the guitar during that period. Segovia went to Russia during the 1920’s, and after that the majority of classical repertoire for the guitar was written for a six-string instrument. So the Russian seven-string kind of died out during the later half of the nineteenth century.

MT: What was the tuning of the Russian seven string instrument?

GW: The tuning is very different from the six string guitar. It’s tuned to an open G major chord, so D-G-B-D-G-B-D, starting from the bottom. Interestingly, the range is not any wider than a standard six-string classical instrument that we play today. But because of the way the Russian instrument is set up it provides for some really interesting fingerings. They use a lot of campanella style that originates from the baroque era. In very basic terms that means there are a lot of open strings, so there is a lot of ringing which provides for some really interesting sonorities.

MT: Have you always been interested in the scholarly part of music?

GW: Yes, in a lot of ways, although I haven’t always been the most studious in classes. But, I do have a lot of interest in pursuing these kinds of things on my own. I have spent many hours sifting through repertoire, composers and that kind of thing. And I am very curious about finding new things for the guitar. So this is where the Russian stuff came from. I had this realization that I knew about two pieces by Russian composers. So I started looking.

MT: What attracted you to the guitar?

GW: It was kind of a roundabout way. I’ve been playing since I was fourteen and prior to that I actually played the Irish Penny Whistle. So I was doing this folk music thing, going to jam sessions and things like that. So that’s how the guitar came in, it seemed interesting so I got one and just kind of strummed for about a year before I got into playing classical guitar.

MT: Do you still go to jam sessions?

GW: Yes, I like to jam with Irish bands when I get the chance. I like to play folk music as much as possible. But I am a bit busy nowadays.

MT: Is there anything else you’d like to say about the program?

GW: Just that Paul Lansky’s Semi-Suite is a really great piece that was written for one of my teachers, David Starobin. Three weeks ago I went to Princeton where Paul is on the faculty and played it for him and that was a lot of fun. He wrote it in almost finger style and it has a Leo Kottke feel to it. I think it’s a really interesting piece and this will be my first time playing it on a concert.

MT: I see the movements are somewhat based on the baroque dance suite.

GW: Yes and the titles are really fun. There are also some very interesting stylistic markings as well, for example the Awkward Allemande is marked “fast and furious, maybe even sloppy.” I think he’s a great guy and a very interesting composer.

END_OF_DOCUMENT_TOKEN_TO_BE_REPLACED

The Orpheus myth inspired French Baroque composers Jean-Philippe Rameau and Philippe Courbois to write expressive solo cantatas about the famous Greek musician-poet and his futile attempts — because of his own impatience — to rescue his beloved Eurydice from the grasp of Pluto in the Underworld. These are beautifully performed by the clear-voiced soprano Hannah De Priest and the velvet-throated baritone Jonathan Woody (who makes a walk-on appearance in the Rameau). END_OF_DOCUMENT_TOKEN_TO_BE_REPLACED

Now that live concerts are beginning to proliferate, it was delightful to hear Oberlin cello professor Darrett Adkins ring a change on the solo suite format with his Hypersuite No. 3 on September 28 in the Cirigliano Studio Theatre at Lorain County Community College. His program opened the new season of Signature Series performances in Elyria, and was dedicated to the memory of Eva Hornyak. END_OF_DOCUMENT_TOKEN_TO_BE_REPLACED