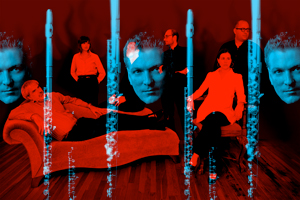 Beginning on Thursday, March 21 and continuing through Saturday, the new music ensemble No Exit presents concerts at MOCA, Drinko Auditorium at Cleveland State University and Spaces Gallery. All three programs include Brian Ferneyhoughʼs Cassandraʼs Dream Song and the U.S. premiere of Sisyphus Redux, Andrew Rindfleischʼs Trio for Piano, Violin and Violincello, and Alberto Ginasteraʼs Puneña No. 2 for Cello (“Hommage à Paul Sacher”). Also featured on the program is the world premiere of Matthew Ivicʼs Piano Quartet No. 2. We spoke to Carlton Vickers and Matthew Ivic by telephone.

Regarded as one of today’s foremost performers of avant-garde flute music, Carlton Vickers specializes in the music of the contemporary and electro-acoustic repertoire. Vickers has been a “ubiquitous presence” in the world of contemporary music for over two decades as soloist with the Canyonlands New Music Ensemble and the Maurice Abravanel Visiting Distinguished Composers Series.

Mike Telin: Tell me a little bit about the pieces you’ll be playing on the program.

Carlton Vickers: I actually do quite a few works by new complexity composers and Brian Ferneyhough’s pieces are of course fairly legendary amongst flutists. The two pieces are bookends of Brian’s flute music. Cassandra’s Dream Song was his first and Sisyphus Redux is his latest.

Sisyphus is for solo alto flute. It didn’t become available until about a year and a half ago. It took a lot of fighting tooth and nail to even get the music. Basically all performances were embargoed because the flutist it was written for had exclusivity of all performances until August of 2011. It was quite a struggle and it has taken about a year and a half to learn the piece. For an eight-minute work it is quite difficult. Actually all of Brian’s music is difficult.

MT: How did you become so focused on contemporary and newly composed works?

CV: It’s always appealed to me, and it’s something that I have found fairly effortless. I wish I had more of an exotic answer. I have been the flute soloist with Canyonlands New Music Ensemble since 1990. We are the ensemble in residence for the Maurice Abravanel Visiting Distinguished Composers Series. We’ve brought in almost all of the most famous composers in the world today for residencies. And we have done an enormous amount of recording. It’s been a wonderful tenure.

MT: It is amazing how many new music ensembles have popped up in the last decade.

CV: Yes, it’s funny because back when I got started it was unheard of, and now performing new music has turned into almost a mainstream profession for a lot of people. It seems like the flood gates have opened, and you have no end to people who compose new music and people who perform it. I think it’s a good thing although there is a lot more to sort through than there used to be.

MT: Have you worked with No Exit in the past?

CV: I’ve played some of Tim Beyer’s music and Andrew Rindfleisch brought me in to work with the composers at Cleveland State a few years back and I had the privilege of meeting a few of the current No Exit players. So I am looking forward to the concerts.

I have to say that to have multiple venues is great. So often we create an incredibly involved performance and we play one concert and it’s over. So it will be nice to get a little bit of mileage out things.

MT: It seems that there is more and more of an audience for new music.

CV: I think we live in a time where people are starved for quality and people can sense the enormous amount of commitment in what they are hearing. They may not necessarily have a grasp on the inner workings but at the same time they do sense the enormous amount of energy on the stage. I think it is also an issue of getting the music out in any and all formats. It’s great having the Internet, Youtube, the ability to download performances to your smart phone. While they all have plusses and minuses at the same time I can’t imagine doing half of what I do without the current digital influence upon our culture. It’s really become quite a lifeline.

Composer and pianist Matthew Ivic has had works performed by numerous groups including Meridian Arts Ensemble, No Exit, CSU Jazz Ensemble, and the CSU String Orchestra. We spoke about his new piano quartet and his work in the electronic music field.

Mike Telin: In your program notes you say that your second piano quartet is a work which uses remaining concepts and musical ideas derived from your first quartet.

Matthew Ivic: Yes, and this piece in particular was really a concept piece. This is a common theme with a lot of the things that I write. I like to have a single governing idea, or a set of rules or musical restrictions in mind that I use to shape the piece and determine form.

MT: Can you describe the conceptual ideas?

MI: [Laughing] That’s where I say that you have to come and listen to the piece. This is the second quartet and there are also these long term relationships with the first. There are some related ideas, some acoustic things I was thinking about.

MT: Do you enjoy writing for this combination of instruments — violin, viola, cello and piano?

MI: I do. There’s a lot of diversity in sound that you can get. I think the instruments really synergize well with one another.

MT: Is being a pianist helpful in writing for the instrument?

MI: Yes, It’s helpful for me, but maybe not for Nick Underhill, because there is a lot of exposed playing and some pretty tricky stuff.

MT: When did you first get the composer bug?

MI: During my undergraduate studies at Cleveland State University. It was always something that appealed to me. And as a pianist playing contemporary music was also something that got me interested.

MT: What are your other musical interests aside from composing?

MT: Did you study electronic music as well, and do you think there is a connection between the acoustic and electronic worlds?

MI: Yes I did study electronic music and there definitely is some influence between working with electronic and acoustic music. It’s something that I didn’t realize at first but the more I dabble in both the more I see these pathways between [the two]. It has had an influence in how I think about acoustic music and I do think there is a little bit of that [influence in the 2nd quartet]

I think technology is the number one thing that is shaping music today. There is some interplay between serious concert music and what is happening in the world of popular music. I think there is going to be a lot more interplay between the two.

MT: It will be very interesting to see where this all goes, but there are still some barriers to overcome before the electronic and acoustic truly come together.

MI: It’s all in what you consider a piece of technology. People think that technology means computers, but inventing a single instrument and adding that to the orchestra is a piece of technology too. I do think computers and electronics are going to change the entire soundscape of contemporary music, there just seems to be a barrier between combining acoustic instruments with electronics. I think coming generations are going to be much more accepting of electronics since it’s more incorporated into daily life.

With this work, premiered in 1907, Sibelius offered a bold departure from the explosive emotionalism so prevalent in late-Romantic era music. This symphony was a renewed embrace of Classicism’s purity of form and melody, and one that, oddly enough, left many initial audiences of the day somewhat bewildered. END_OF_DOCUMENT_TOKEN_TO_BE_REPLACED

After eating a Po’boy from The Dawg Bowl Cajun food truck, I caught the first half of Brian Culbertson’s show in The Connor Palace Theatre. END_OF_DOCUMENT_TOKEN_TO_BE_REPLACED