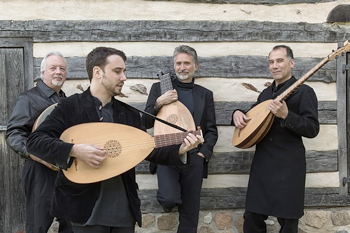 On Thursday, April 7 at the Bop Stop, the Renaissance band Ayreheart presented a  concert titled “Will You Walk the Woods so Wild.” The captivating program — performed by Ronn McFarlane, lute, Brian Kay, vocals and lute, Will Morris, colascione, and Mattias Rucht, percussion — explored the intersection between folk music and art music in 16th- and 17th- century England, Scotland, and Wales. It also highlighted the intersections of Renaissance folk music and classic rock.

Not surprisingly, the evening’s selections weighed heavily on the music of John Dowland and William Byrd, as well as that most prolific Renaissance composer, Anonymous. From start to finish, Ayreheart breathed new life into each tune — in no small part due to vocalist Brian Kay’s incredible delivery of the texts. Singing with a pure, centered sound and impeccable diction, he’s a natural-born storyteller. At times a the lead vocalist of a rock band, at times an art-song singer, and at others a shy poet, he had you hanging onto his every word. Coupled with the excellent musicianship of McFarlane, Morris, and Rucht, his attributes made for a memorable listening experience. The group’s decision to use some sound enhancement was wise: all of the instrumental voices were easily heard without ever becoming overbearing.

Featured Dowland songs included My Lady Hudson’s Puffe, Come Again, Mr. Dowland’s Midnight (complete with a great bass line played by Morris), and Fortune my Foe, a song that was once sung during public executions.

The band’s rendition of William Byrd’s Will You Walk the Woods so Wild was riveting, while standout performances of anonymous songs included In a Garden so Green, Twa Corbies (Two Ravens), Black is the color of my true love’s hair, and John Barleycorn.

Ronn McFarlane said that he first heard John Barleycorn in high school on the rock group Traffic’s 1970 album, John Barleycorn Must Die, featuring Steve Winwood on vocals. McFarlane went on to explain that the song’s humorous lyrics are actually about the process of turning barley into Scotch.

The evening ended with Nottamun Town, a tune Bob Dylan borrowed for his song Masters of War. Here again Ayreheart reveled in the opportunity to bring classic rock and Renaissance folk music together, complete with a driving bass solo by Will Morris and flashy rhythms by Mattias Rucht on cajón.

END_OF_DOCUMENT_TOKEN_TO_BE_REPLACED

Rodgers & Hammerstein’s Cinderella was originally produced for television in 1957 — seven years after the animated Disney film was released — and starred Julie Andrews. According to the Rodgers & Hammerstein website, it was viewed by over 100 million people. END_OF_DOCUMENT_TOKEN_TO_BE_REPLACED

The story line has its origin in an 1855 play and an 1842 farce that Thornton Wilder mined for his 1938 play The Merchant of Yonkers. When that turned out to be a flop, in 1954 Wilder made the crucial decision to re-center the show around the character of the legendary marriage broker Dolly Gallagher Levi and renamed it The Matchmaker. END_OF_DOCUMENT_TOKEN_TO_BE_REPLACED

The Dodero Center for the Performing Arts at the Gilmore Academy in Gates Mills is one feature of an impressive campus. The auditorium is shallow, the stage is deep, and the ensemble played without a shell. Throughout the program, the sound, especially in instruments’ lower registers, tended to disappear. END_OF_DOCUMENT_TOKEN_TO_BE_REPLACED