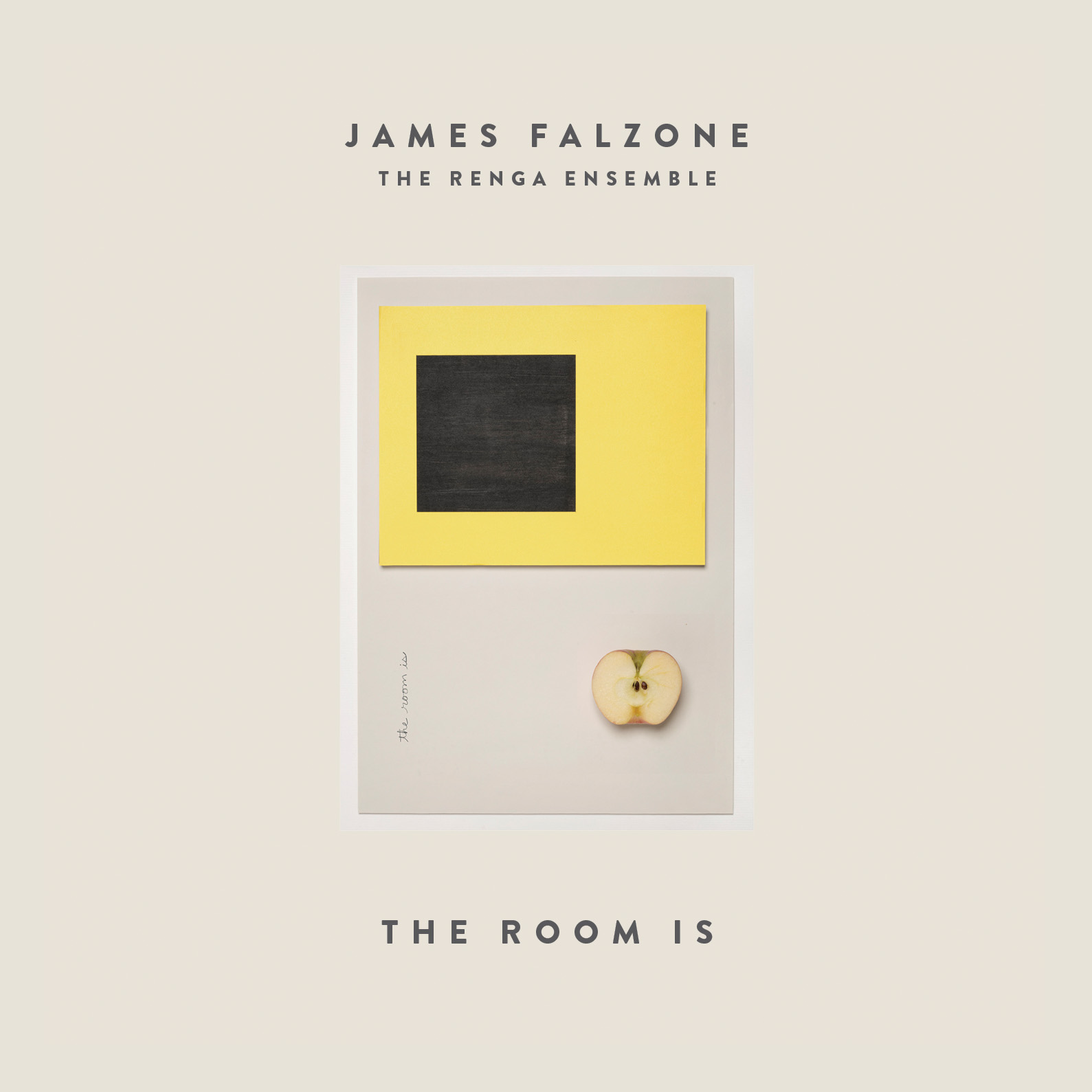 It’s a banner week for Chicago-based clarinetist and composer James Falzone. Today marks the release of his Renga Ensemble’s debut recording The Room Is on the Allos Documents label. Tomorrow the group will embark on a nine-city tour promoting the album. Then, on Sunday, March 1 at 7:00 in the Bop Stop, Falzone and his Renga Ensemble colleagues Ken Vandermark, Keefe Jackson, Jason Stein, Ben Goldberg, and Ned Rothenberg, playing an assortment of clarinets and saxophones, will present a concert featuring music from the new recording along with improvised works.

Trying to define James Falzone is an impossible task — he’s capable, and willing, to tackle just about any type of music. So preparing for our Skype conversation was a challenge: what should the first question be? I opted to begin at the beginning: How did it all start?

“That’s the million dollar question, and there really is no direct answer,” Falzone said with a big laugh. “I was always interested in a lot of different kinds of music. I think this came from my early training with my uncle, who is a film composer. He’s also a great saxophonist and flutist who has played with the Chicago Symphony and studied composition with David Diamond. So he had an eclectic look at music.”

Falzone remembered that every time his uncle would visit from Los Angeles, he always brought records. “One day he gave me Stravinsky’s Firebird and a record by Charlie Parker. He didn’t tell me that one was jazz and one was classical. He simply told me it was great music, and when he returned he asked me how I liked them. Again, he never discussed them in terms of genres, so I never thought about the genres either.”

Eventually Falzone began to study privately with a Chicago teacher who was well-versed in both classical and jazz. “Every week the scope of the lessons would change. One week it was all about jazz and improvising — learning how to play Charlie Parker. The next week we’d work on Weber or the Mozart concerto. So by the time I got to high school and then into college, I was already involved in this wide breadth of music. I truly treated all music ecumenically.”

In college he added the study of World Music to the mix, and by his early 20s he began thinking about how to synthesize these musical styles. “I’m not unique when it comes to that — I know and work with a lot of musicians who are involved in similar things. For example, the musicians in the Renga Ensemble could find themselves playing classical music one night and straight-ahead jazz or improvised music another. Ned Rothenberg is a master Shakuhachi player, and Ben Goldberg is a great Klezmer player. But this is the way music is moving. Musicians are interested in and have had the training to be able to play so many different styles, so there isn’t a reason not to.”

Why did he decide to create the Renga Ensemble? “I wanted to get even less sleep, but seriously, like any artist, you can’t keep the creative impulses at bay. I had a couple of jazz-orientated projects going, but I was looking for something new. And I really love the sound of multiple clarinets — there’s just something about the overtones that are created. So I thought it would be fascinating to get a group of clarinetists together to write music that was dedicated to exploring the timbral possibilities.”

After creating a short list of clarinetists whom he admired, Falzone began contacting people and was surprised that everyone now in the ensemble wanted to be involved. “A lot of being a musician is organization. It’s creating the situation in which to realize the music. It was a long process of getting these guys in the same place at the same time.”

Finally, in the spring of 2013, everyone came together in Chicago for rehearsals and performances, and at the end of the week went into the recording studio. “I wasn’t entirely sure it would all work out, but by the end everyone was working at a very high level together, and it was clear that something exciting was happening. And as it turned out, making the recording was relatively easy. We were in the studio sitting in a circle — there were no overdubs and very few edits, and most of what you hear on the recording is first or second takes. It’s a very organic, raw way to make a record, which is the way I think improvised music should be recorded.”

Falzone’s approach to writing for the group is based in the centuries-old Japanese tradition of Renga, in which two or more poets collectively create a poem. The tradition also inspired the group’s name. But specifically it was the poetry of Anita Virgil that caught Falzone’s attention. “I’m fascinated by Haiku and have been for years. I study and write them, although not terribly well. It is a meditative process that was used in the monasteries to help the monks be more attentive and mindful of the everyday moment. But as I researched Renga more, I thought, ‘this sounds like a lot of the music I’m involved with’ — many personal voices coming together to make something new.”

Although Falzone is not a composer whose music is “about” things, he’s always looking for titles, and Anita Virgil’s poem The Room Is offered the perfect inspiration. “I took parts of the poem and they became the titles. I try to make it clear that the music is not programmatic, but there is a connection to a particular poem, as well as to the Haiku tradition of clarity, mindfulness and simplicity.”

The first such video, capturing the October 20 performance of Resilience at First Baptist Church in Shaker Heights, delivered handsomely on that promise. Erica Brenner’s sensitive videography and audio mixing preserved brilliant performances of music that illuminated two troubled periods in history: the plague of London in 1665, and the outbreaks of cholera and dysentery that dampened but failed to defeat the human spirit at the end of the American Civil War two centuries later. END_OF_DOCUMENT_TOKEN_TO_BE_REPLACED

The Diamond Brass Quintet opened Rocky River Chamber Music Society’s new season on Monday, October 12 with nobody in the pews at West Shore Unitarian Universalist Church. Like most performances these days, the concert was only attendable online. The players were widely-spaced on the stage, plexiglass shields were in place to cut down on aerosol transmissions, and the quintet took two intervals to go outdoors and let the air in the sanctuary refresh itself. (Rehearsals had been held outside as well.) END_OF_DOCUMENT_TOKEN_TO_BE_REPLACED

“Bewitched,” the first subscription concert of this season by Les Délices, can be summed up in one word: sensational. In her introductory remarks, director Debra Nagy talked about the “Embracing Change” theme of the season and completely rethinking the concert experience for streaming. The detailed planning was in evidence throughout the program. “Bewitched” was not just a concert; it was a carefully planned musical film, with elements of drama and music appreciation, all in support of the inspired program choices featuring Medea and Circe, two famous witches (or sorceresses, if you prefer) of classical antiquity. END_OF_DOCUMENT_TOKEN_TO_BE_REPLACED

END_OF_DOCUMENT_TOKEN_TO_BE_REPLACED

Though it had amassed a vast trove of audio over the decades, The Cleveland Orchestra has come late to the game in the video department. Even so, the organization wasn’t about to rush to produce the equivalent of home movies to keep its patrons engaged while live events were on hold. END_OF_DOCUMENT_TOKEN_TO_BE_REPLACED

END_OF_DOCUMENT_TOKEN_TO_BE_REPLACED

Although it wasn’t the original plan to go online last weekend for the final round of the James Stroud Classical Guitar Competition, moving to a digital format suited the event well. Young performers Aytahn Benavi, Patricia Hernandez, Ian Tubbs, and Eric Wang played in the intimate setting of their own homes, giving everyone who tuned in a front row seat. END_OF_DOCUMENT_TOKEN_TO_BE_REPLACED