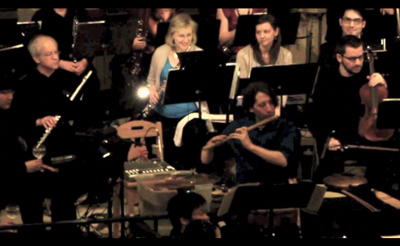 James Feddeck conducted CityMusic Cleveland in the second of five themed concerts devoted to the topic of refugees on Thursday, March 13 at Trinity Lutheran Church in Ohio City, a program that began with an arresting solo cello work by Chinary Ung, moved on to an imaginative new percussion concerto by CIM-trained composer Dan Visconti featuring Shane Shanahan, and culminated in a thrilling performance of Beethoven’s “Eroica” Symphony.

After demonstrating some of the special effects in the piece, cellist James Jaffee led off the evening with an intense, committed performance of Ung’s 1980 Khse Buon (Four Strings), a 15-minute work that the Cambodian composer wrote during his difficult transition from the troubles in his homeland to life in the United States. Playing from the conductor’s platform in front of the already seated orchestra, Jaffee produced an amazing range of sounds from growling bass figures to high, whistling harmonics, and from sudden, startling fortissimos to disappearing whispers. A fusion of eastern and western traditions, Khse Buon manages to sound strange and familiar at the same time.

Visconti’s Roots to Branches was commissioned by CityMusic as a work to be wrapped around quotations from refugees who have made their homes in Cleveland, collected by CityMusic’s principal oboist and VP for Community Engagement, Rebecca Schweigert Mayhew. The work is thus part of a larger project that resulted in four concerts that took place the week before featuring musicians from Burma, Somalia, Nepal, Bhutan, Sudan, Iraq, Burundi, Russia and the Democratic Republic of Congo.

An important sub-plot in the work is Grammy-winning world percussionist Shane Shanahan, a founding member of Yo-Yo Ma’s Silk Road Ensemble, who brought a treasure chest of exotic and more familiar instruments to his tailor-made solo role.

Narrated by Ali Alhaddad, the 30-minute work unfolded in five scenes chronicling the progress of refugees from their troubles in their home countries to their new homes on these shores, a narrative that inspired Visconti and Shanahan to call up a variety of aural pictures. Evocative of unfamiliar cultures but accessible to all, Visconti’s music is attractive and fresh-sounding. Shanahan’s exotic gadgets — he also played ethnic flutes — added alluring effects, though none so compelling as the “body percussion” he played on his own frame, moving upward to end with remarkable sounds from his cheeks.

Though the narration was helpful in navigating through the piece, there might have been more of it. Perhaps there originally was — there were a few stretches that seemed to have been designed to be played under words that were no longer there.

After an intermission which interrupted the flow of the evening, Feddeck led a spellbinding account of Beethoven’s Third Symphony. With an unusually high ratio of winds and brass to strings, details emerged throughout the 50-minute work that gave it a whole sound — close in fact to what some period instrument ensembles produce.

Feddeck kept tempos brisk (the funeral march notably so) and shaped long phrases with beautifully nuanced profiles. CityMusic responded flexibly and with some breathtaking playing in fast passages. A special nod goes to the horn section — a small dynasty of Wadenpfuhls — whose brassy calls in the scherzo were flawless.

The audience was small on Thursday evening — perhaps because Trinity Lutheran is a new venue for CityMusic. What it lacked besides numbers was the presence of some of the new Clevelanders the music sought to celebrate. It would have been a nice gesture to fold in some of the musicians who performed on the “Journeys of Hope” series in the week leading up to the orchestra concerts.