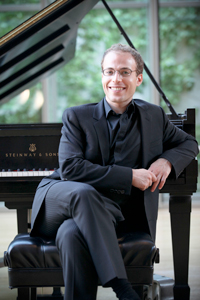 Since graduating from the Juilliard School in 2004, Orion Weiss has performed with many major North American orchestras, including the Chicago Symphony, Boston Symphony, Los Angeles Philharmonic, New York Philharmonic, Philadelphia Orchestra, Pittsburgh Symphony, Toronto Symphony Orchestra, National Arts Centre Orchestra, and Orpheus Chamber Orchestra. Additionally, Weiss is enthusiastic about playing chamber music. “I just played with the Hamilton (Ontario) Philharmonic and last weekend I was in Riverside, California and now I’m in Seattle,” Weiss told us by telephone. “I’m here for the Chamber Music Festival. James Ehnes is the director and he and I usually do at least one if not more recitals a year together and this season we have quite a few.”

Weiss says that he truly enjoys the collaborative process of performing chamber music and his enthusiasm for it comes through in his voice. “It wasn’t part of my early education, but since graduating and getting into the world, I’ve realized that playing chamber music is one of the greatest joys of being a musician. Getting to play with other wonderful musicians affords you the opportunity to get to know each other on a more personal level. You get to learn so much from them, so I love it.”

And speaking of friends and colleagues, Tuesday’s Chamber Music Society performance with the Albers Trio will reunite four friends in what will be their debut performance as an ensemble. “Julie Albers and I made a CD of cello and piano music together. It was the first thing I ever recorded and we have played together at ChamberFest Cleveland as well as the Seattle festival. Rebecca and I were at Juilliard together, so I’m close friends with them both and it’s always fun to see Laura. So it’s just natural that we would end up playing a recital together and I’m really happy that it worked out.”

Orion Weiss began his musical studies in Iowa at the Preucil School of Music, and after his family moved to Cleveland (Lyndhurst), he eventually enrolled in the Cleveland Institute of Music’s Young Artist Program. “I studied for five years with Paul Schenly beginning in late junior high and all through high school. He was the person who inspired me to be a pianist and he showed me exactly how much work it would take to be one. I think of him as my musical father and we have stayed in touch. He’s like the musical grandfather to my daughter so he is part of my family.” Weiss adds that one of the great things about being at CIM was that he not only played for Paul Schenly each week, “but I also played for Sergei Babayan, Daniel Shapiro and Kathryn Brown so I sometimes had three lessons a week on different repertoire. Mr. Schenly wanted me to be soaking in everybody’s ideas.” Weiss describes his studies with Emanuel Ax at Juilliard as “an amazing experience. He is a wonderful man and a wonderful teacher.”

Like many young musicians, Weiss’s career has received a boost on a couple of occasions by stepping in for some established artists on very short notice. In March 1999, with less than 24 hours’ notice, Weiss replaced André Watts for a performance with the Baltimore Symphony Orchestra, and in the summer of 2011, Weiss made his debut with the Boston Symphony Orchestra at Tanglewood, substituting for Leon Fleisher. “It all about answering the phone at the right time but also being willing to take a plunge,” Wiess says. “Of course it means you have to change your weekend plans, but if those plans don’t involve playing a concert you have to do it.”

And what feelings does one get when you receive that telephone call? “It’s kind of a combination of excitement followed by a lump in the stomach. First it’s wow, then oh my, but them I’ll play through the piece and if I feel I can do it then I say yes. I let the nerves talk to themselves rather then talking to me.”

Weiss also performs regularly with his wife, pianist Anna Polonsky, and enjoys sharing photos of the couple’s baby daughter, Alia. “I’m one of those dangerous people to sit next to at dinner because I have 1,500 photos on my phone and I have no shame about showing the photos of my child. But one of my favorite things in my musical life is playing piano four-hands concerts with Anna. We’re performing together more and in fact we’re playing a concert on Saturday here in Seattle of the Dvorak op. 46 Slavonic Dances.”

Wrapping up our fun conversation, Weiss says he also looks forward to returning to Cleveland for reasons other then musical. “My parents live in Cleveland, so yes, it is coming home to them, but I also go home to my wife and daughter in New York. I’m very lucky to have two homes, but Cleveland was the first. And I don’t have to stay in a hotel when I’m in Cleveland which is really nice.”

Music director and conductor Daniel Meyer built his playlist around Cleveland themes and scenes. “Exploration CLE” made use of engaging selections from the classical canon and beyond that celebrated “what makes Cleveland so special.” Happily, he and his musicians avoided constructing a visual slide show, choosing to let the music speak for itself. END_OF_DOCUMENT_TOKEN_TO_BE_REPLACED

You could see the relationship at work on a practical level. Repertoire for two players at the same piano requires a certain choreography. There’s just one of each pedal to share, and the hand crossings left and right — which can be so fun to watch a soloist pull off — get more complicated when another person’s involved. At times, Pompa-Baldi drew a hand away from the keyboard and into his body, making room for Friscioni, and at the close of a few delicate phrases, the two were crouched together over the same final notes at one end of the instrument. END_OF_DOCUMENT_TOKEN_TO_BE_REPLACED

The signature sounds of these famous film scores are not so much John Williams’ invention as allusions to other classical pieces. The foreboding half-step from Jaws, growing more and more furious in the cellos and basses, shares something with Dvořák’s “New World” Symphony and Bartok’s Miraculous Mandarin. END_OF_DOCUMENT_TOKEN_TO_BE_REPLACED