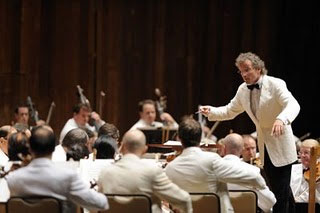 As the normally-resident birds gave way to the end-of-summer locusts, The Cleveland Orchestra bade farewell to Blossom on Sunday evening in a season closer that also served as a send-off for the ensemble’s forthcoming European tour. Like Friday evening’s Summers @ Severance performance, the repertoire was a condensed version of what audiences in London, Lucerne, Berlin, Linz, Vienna, Paris and Amsterdam will enjoy in thirteen performances from September 7-22: works by Johannes Brahms and Jörg Widmann, the orchestra’s former Daniel R. Lewis Young Composer Fellow (an entire concert in Berlin’s Philharmonie on September 11 will be devoted to Widmann’s music).

Widmann’s Con brio: Concert Overture began Sunday evening’s concert on many witty notes. Commissioned by conductor Mariss Jansons to headline a concert of Beethoven’s seventh and eighth symphonies and scored for those orchestral forces, the overture was first performed by The Cleveland Orchestra at Severance Hall performances led by Christoph von Dohnányi in January of 2011. Introduced by drum rolls, the piece begins with big columns of chords like the opening of the Eroica symphony but with surprising noises popping up in between. As the 15-minute piece unfolds, bits of Beethoven-sounding themes float by along with cheeky interjections from winds and strings that might sound contrived in the hands of a lesser composer, but with Widmann seem perfectly integrated into the whole.

Widmann’s Flûte en suite and Brahms’s first symphony were featured on the Friday evening performance. On Sunday at Blossom, Con brio introduced Brahms’s third and fourth symphonies just as charmingly as it might have preceded a pair by Beethoven.

Fine inner details from the winds, excellent blend and balance among the sections and gorgeous solos by assistant principal clarinet Daniel McKelway, principal oboe Frank Rosenwein and principal horn Richard King distinguished the third symphony, not to mention the whole ensemble’s magical habit of producing a sound that is at once full, rich and transparent. Franz Welser-Möst took its third movement, marked Poco allegretto, at a quick, unsentimental tempo (but a gentle one) and segued directly into the finale. Though it sounded pushed, the last movement was thrilling and ended in a moment of sheer loveliness.

Brahms’s somewhat unusual fourth symphony ended the concert. After an opening Allegro that nicely combined grace with power, the slow movement was adorned by a fine horn duet, clarinet solo and a mellifluous restatement of the second theme by the cellos. Cascading winds and glorious horns — along with Brahms’s inventive use of the triangle — made for a special third-movement scherzo. The symphony ends with a passacaglia, thirty variations on an eight-bar theme that Welser-Möst and the Orchestra made into a distinct series of little musical scenes, highly profiled yet closely related to the whole. There was a huge crowd both in the pavilion and on the lawn Sunday evening and a correspondingly huge ovation at the end of the concert.

Fireworks followed Brahms’s Fourth, but no further excitement was really needed. Brahms symphonies are orchestrally ubiquitous these days, but often prosaically conducted and turgidly played. Welser-Möst and The Cleveland Orchestra have something to say in these works that should make Europe sit up and pay attention.

END_OF_DOCUMENT_TOKEN_TO_BE_REPLACED

Rodgers & Hammerstein’s Cinderella was originally produced for television in 1957 — seven years after the animated Disney film was released — and starred Julie Andrews. According to the Rodgers & Hammerstein website, it was viewed by over 100 million people. END_OF_DOCUMENT_TOKEN_TO_BE_REPLACED

The story line has its origin in an 1855 play and an 1842 farce that Thornton Wilder mined for his 1938 play The Merchant of Yonkers. When that turned out to be a flop, in 1954 Wilder made the crucial decision to re-center the show around the character of the legendary marriage broker Dolly Gallagher Levi and renamed it The Matchmaker. END_OF_DOCUMENT_TOKEN_TO_BE_REPLACED

The Dodero Center for the Performing Arts at the Gilmore Academy in Gates Mills is one feature of an impressive campus. The auditorium is shallow, the stage is deep, and the ensemble played without a shell. Throughout the program, the sound, especially in instruments’ lower registers, tended to disappear. END_OF_DOCUMENT_TOKEN_TO_BE_REPLACED