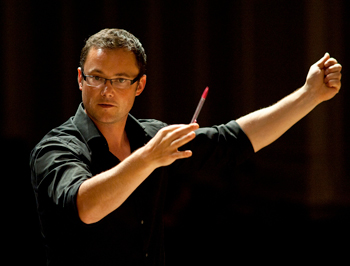 Mother Nature was apparently clued in – and ready – for the Saturday evening concert by the Cleveland Orchestra at the Blossom Music Center on August 9. During the first half of the program, the birds and the frogs and the crickets started warming up. By the time the Orchestra took the stage for Eine Kleine Nachtmusik, the sounds of nature were ready! And then came Supermoon! It really was spectacular. Those music lovers on the lawn had a better glimpse of it, perhaps, but once we were out in the parking lot, there it was in all its huge, luminous splendor. The weather was simply perfect for enjoying the moon and the music!

Of course, that’s because the Orchestra, with guest conductor Matthew Halls, was luminous enough in itself to have lit up the skies like daylight. The evening’s program – and homage to Mozart — began with the overture to his opera Idomeneo. Mr. Halls drew lovely sounds from the musicians in front of him with his decisive movements and graceful hand motions. He conducted the entire program without a baton, but then he certainly didn’t need it, either. At the end, the overture was allowed to just drift away, without a specific concert ending.

A more muscular look at the music of Mozart was provided by Pyotr Ilyich Tchaikovsky in his Suite No. 4 or Mozartiana. The first two movements were based on dance music, and Mr. Halls was very fluid on the podium, swaying with the music, with the occasional little hop thrown in for good measure. The reverberation in the pavilion at the end of the first movement seemed to go on forever, perhaps in imitation of the organ at Severance Hall. Compared to the pure Mozart of the other three works, this work required more musicians, notably winds and brass, which added an extra dimension. Acting concertmaster Yoko Moore performed the violin solos with grace and confidence.

After intermission it was time for the forces of nature – and a noisy low-flying airplane! – to accompany the enchanting Eine Kleine Nachtmusik led by the animated Mr. Halls. The four movements moved steadily forward, graceful and subtle, and some in the audience swayed right along with the conductor. It seemed as though the orchestra members were truly enjoying themselves and the music.

It’s difficult enough for most listeners to understand the art of musical composition, but to think that at the age of 27, young Herr Mozart had already written his Symphony No. 35. It’s even more difficult to acknowledge that Symphony No. 36 was written in five days! That’s what can happen when you go on vacation without a new symphony in your pocket. But Wolfgang was certainly up to the task. The piece, known evermore as the Linz, in honor of the host city, is a dazzler, full of beautiful melodies and swaying melodies which soared and swirled above the musicians.

It was an altogether lovely experience. If you’ve not been to Blossom Music Center lately, what are you waiting for? The Orchestra has three more concerts there, plus one more in the new series Fridays @ Severance before setting off on their European tour

Due to a scheduling mixup, two writers separately reviewed this performance. A second review by our regular correspondent Robert Rollin has also been posted.

Jackson began the program with a recitation of Langston Hughes’ poem “Helen Keller” — the first of five poems by Hughes that served as interludes between each piece on the first half. END_OF_DOCUMENT_TOKEN_TO_BE_REPLACED

Pianos with pins and tape on strings, a bass drum and tam tam, crotales, Almglocken, and vibes. Microphones were hooked up all around the instruments. The feed was sent to speakers around the room. Lighting designer Nicholas Houfek hung incandescent globes over the arrangement of instruments from thin black wires stretching across the beams. END_OF_DOCUMENT_TOKEN_TO_BE_REPLACED

From the podium, Elim Chan set an ambitious tone for the evening. The rising star conductor, here in her Cleveland Orchestra debut, has a commanding style, and every twist and turn in Saturday’s performance tracked closely with her baton. END_OF_DOCUMENT_TOKEN_TO_BE_REPLACED