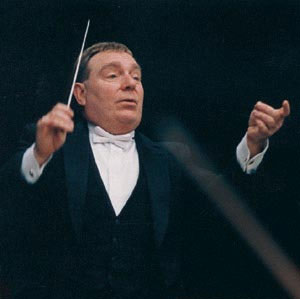 is always something of a letdown when Maestro Gerhardt Zimmermann doesn’t preface a program selection at a Canton Symphony Orchestra concert with his special brand of wit, sardonic or otherwise. Ever the engaging raconteur, he didn’t disappoint on the occasion of the December 2 performance at Umstattd Hall.

One of the unique elements in this concert, billed as Audience Choice, was that the three program selections were chosen from a list voted upon by loyal CSO subscribers. The list consisted of three overtures, three piano concertos, and three symphonies which Zimmermann offered for consideration at the end of last season. The winning selection for the first work on the program was Rossini’s Overture to La gazza ladra (The Thieving Magpie).

In his introduction, Zimmermann told a story as riotously spirited as the overture itself. He recounted how a certain Texas orchestra routinely started all of its concerts with the U.S. National Anthem. Like the Rossini overture, it begins with a military snare drum roll. But on the single occasion when the anthem was dropped from the program, the orchestra instead launched immediately into the Rossini overture. At the sound of the familiar drum roll, the audience dutifully and promptly stood at attention, ready to sing. At the sound of the second drum roll (the Rossini overture begins with three of them), the audience just as promptly sat down, clearly perplexed.

The raucous laughter elicited by Zimmermann’s storytelling was the perfect overture, as it were, to the overture. Zimmermann’s reading of Rossini’s rambunctious, spritely energy was in turn thoroughly enlivening, and the orchestra responded in kind with captivating vivacity.

The atmosphere for the remainder of the evening shifted progressively into a more searing emotional climate, beginning with Mozart’s Piano Concerto No. 24 in c. Right from the opening moments of the turbulent first movement, guest soloist was clearly caught up in the work’s dramatic thrall. As if animated by the spirit of Mozart himself, she seemed to speak the music, breathing fresh new life into its many contrasts of mood — alternately child-like, majestic and stormy, yet always genuinely piquant.

Mozart’s tight control of form and melody in this work is such that the soloist has nowhere to hide. There are no overstated decorations, no allowances for gratuitous pyrotechnics except, perhaps, in the first movement cadenza. Mozart left none for this concerto. So here, Buechner’s own cadenza was a brilliant convergence of astonishing technical prowess with riveting emotional thrust, reminiscent of Beethoven at his most impassioned. And throughout the entire work, the interplay between orchestra and pianist was superbly attuned to the work’s utterly sublime clarity of texture.

Once again, Zimmermann addressed the audience, expressing his surprise at the subscribers’ majority vote to hear the evening’s final selection, Rachmaninoff’s Symphony No. 1 in d. While he considered the evening’s first two choices “…rather predictable,” he was flummoxed by this choice, adding, “I had thought you would have selected Brahms’s Symphony No. 4.”

Flummoxed or not, Zimmermann poured himself into this performance as surely as Rachmaninoff poured a plethora of musical ideas into this quintessentially Russian symphony. Dazzlingly dramatic, the work is both a collision and a melding of delicacy and sweetness with relentless bombast. The orchestra rose to the event with a stunning display of razor-sharp clarity, tender lyricism, and startlingly explosive power.

While this was certainly not a go-gently-into-the-night finale, it was nonetheless an eminently memorable and gratifying one.

END_OF_DOCUMENT_TOKEN_TO_BE_REPLACED

Rodgers & Hammerstein’s Cinderella was originally produced for television in 1957 — seven years after the animated Disney film was released — and starred Julie Andrews. According to the Rodgers & Hammerstein website, it was viewed by over 100 million people. END_OF_DOCUMENT_TOKEN_TO_BE_REPLACED

The story line has its origin in an 1855 play and an 1842 farce that Thornton Wilder mined for his 1938 play The Merchant of Yonkers. When that turned out to be a flop, in 1954 Wilder made the crucial decision to re-center the show around the character of the legendary marriage broker Dolly Gallagher Levi and renamed it The Matchmaker. END_OF_DOCUMENT_TOKEN_TO_BE_REPLACED

The Dodero Center for the Performing Arts at the Gilmore Academy in Gates Mills is one feature of an impressive campus. The auditorium is shallow, the stage is deep, and the ensemble played without a shell. Throughout the program, the sound, especially in instruments’ lower registers, tended to disappear. END_OF_DOCUMENT_TOKEN_TO_BE_REPLACED