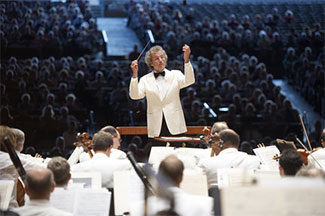 a vision that Cleveland has more people making music than anywhere”, Cleveland Orchestra music director Franz Welser-Möst said before bringing the Orchestra’s “Make Music!” week showcase concert to a suitably festive conclusion on Thursday evening at Severance Hall. Not every music-maker in this vibrant community and region was in the spotlight last night, but everybody who regularly rehearses and performs under the roof of Severance Hall — plus the kids who make up the El Sistema @ Rainey string orchestra program under founder and director Isabel Trautwein — had the opportunity to demonstrate their wares to a large audience.

At the other end of the proceedings, after a welcome from Musical Arts Association president Dennis Labarre, eleven young string players from El Sistema @ Rainey joined TCO bassist Henry Peyrebrune in Irving Berlin’s God Bless America and Brian Balmages’s Burst, playing instruments provided by the Conn-Selmer company and The Cleveland Orchestra. Just over a year ago when the El Sistema kids made an appearance on the Martin Luther King, Jr. open house at Severance, they were still playing on open strings. Rehearsing five days a week after school since that time, the young violinists, violists and cellists have made pretty astonishing progress. Led by Trautwein on her violin (she plays in the first violin section of The Cleveland Orchestra), the group sounded robust and confident. They also seemed to be having a great time: after they momentarily lost their way toward the end of Burst, they smiled, giggled and immediately got back in the groove.

Up next were members of the Children’s Chorus under Ann Usher, with Dianna White-Gould at the Steinway. The 37 singers from grades 6-9 who represent 28 schools started off with the countertenor duet, Sound the Trumpet from Purcell’s ode, Come, Ye Sons of Art. Their intertwining lines, over a continuo line played by principal cellist Mark Kosower, were sweet and supple. Their English version of the Evening Prayer from Humperdinck’s Hansel and Gretel was beautifully affecting and their rapid-fire French patter in Donald Patriquin’s J’entends le Moulin was amazing (three percussionists added an extra rhythmic dimension).

After a bit of furniture rearranging, the grand drape rose to reveal the Youth Chorus (85 members from 36 high schools) on the upstage risers, ready to sing Mendelssohn and Argento under director Lisa Wong with John Simmons at the piano. There shall a star from Jacob come forth, one of the only completed sections of Mendelssohn’s late, potential third oratorio, Christus, was pure, clean and strong and sang with remarkable diction. Argento’s jubilant and rhythmically complex Gloria from his opera The Masque of Angels came off splendidly even though chorus and piano were far away from Wong, whose podium was at the front of the stage.

Now’s the time for a round of applause for the stage crew, who had a logistical nightmare on their hands on Thursday evening. After the Children’s Chorus set, they parked front-of-curtain risers on the orchestra pit elevator and lowered them out of sight. After the Youth Chorus finished its two solo numbers, seven men quickly and efficiently set up the rest of the Youth Orchestra chairs and stands (winds and percussion were already provided for) while COYO director James Feddeck spoke to the audience. And during the ensuing intermission the entire stage was reset for the second half. Impressive!

The Youth Chorus and Youth Orchestra (numbering 100 players from all over the region) joined in a lustrous performance of Brahms’s Nänie in which the chorus was able to project even over the full orchestra without pushing. Some of the talk time beforehand might usefully have been used to describe what Schiller’s poem was all about (the perishability of beauty), since it was sung in German and no translation was provided. (The piece will be repeated next Sunday evening when COYO and COYC give their mid-year concert at Severance Hall).

What looked like a flash mob of instrumentalists assembled onstage after intermission as members of The Cleveland Orchestra and Cleveland Orchestra Youth Orchestra came together in a side-by-side finale of works by Dvorak and Tchaikovsky under Franz Welser-Möst. (Actually two different side-by-sides took place — there was a changing of the Youth Orchestra guard between the two pieces.) COYO students took the inside stands in the string section and were interleaved among the wind and percussion sections.

Dvorak’s Carnival Overture was brilliantly festive and the finale from Tchaikovsky’s Symphony No. 5 received a colorful, resonant reading from the massed forces (COYO will play the whole symphony on Sunday). Handel’s famous chorus (probably in Mozart’s orchestration) made a fitting close to an evening that brought several generations of musicians from beginners to seasoned professionals to the Severance Hall stage to show how rewarding it is to “Make Music!”

The first such video, capturing the October 20 performance of Resilience at First Baptist Church in Shaker Heights, delivered handsomely on that promise. Erica Brenner’s sensitive videography and audio mixing preserved brilliant performances of music that illuminated two troubled periods in history: the plague of London in 1665, and the outbreaks of cholera and dysentery that dampened but failed to defeat the human spirit at the end of the American Civil War two centuries later. END_OF_DOCUMENT_TOKEN_TO_BE_REPLACED

The Diamond Brass Quintet opened Rocky River Chamber Music Society’s new season on Monday, October 12 with nobody in the pews at West Shore Unitarian Universalist Church. Like most performances these days, the concert was only attendable online. The players were widely-spaced on the stage, plexiglass shields were in place to cut down on aerosol transmissions, and the quintet took two intervals to go outdoors and let the air in the sanctuary refresh itself. (Rehearsals had been held outside as well.) END_OF_DOCUMENT_TOKEN_TO_BE_REPLACED

“Bewitched,” the first subscription concert of this season by Les Délices, can be summed up in one word: sensational. In her introductory remarks, director Debra Nagy talked about the “Embracing Change” theme of the season and completely rethinking the concert experience for streaming. The detailed planning was in evidence throughout the program. “Bewitched” was not just a concert; it was a carefully planned musical film, with elements of drama and music appreciation, all in support of the inspired program choices featuring Medea and Circe, two famous witches (or sorceresses, if you prefer) of classical antiquity. END_OF_DOCUMENT_TOKEN_TO_BE_REPLACED

END_OF_DOCUMENT_TOKEN_TO_BE_REPLACED

Though it had amassed a vast trove of audio over the decades, The Cleveland Orchestra has come late to the game in the video department. Even so, the organization wasn’t about to rush to produce the equivalent of home movies to keep its patrons engaged while live events were on hold. END_OF_DOCUMENT_TOKEN_TO_BE_REPLACED

END_OF_DOCUMENT_TOKEN_TO_BE_REPLACED

Although it wasn’t the original plan to go online last weekend for the final round of the James Stroud Classical Guitar Competition, moving to a digital format suited the event well. Young performers Aytahn Benavi, Patricia Hernandez, Ian Tubbs, and Eric Wang played in the intimate setting of their own homes, giving everyone who tuned in a front row seat. END_OF_DOCUMENT_TOKEN_TO_BE_REPLACED