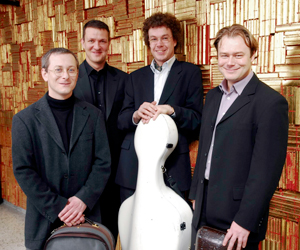 String Quartet, founded some 25 years ago by members of the Leipzig Gewandhaus Orchestra, has a venerable history – remarkably, only one personnel change in that time. They are remarkable in particular for the breadth of their repertoire. According to their website, they have released “almost 70 recordings, spanning from Mozart to Cage and including the complete works of Brahms, Mozart, Mendelssohn Bartholdy, Schubert and the complete Second Viennese School.”

Currently the Leipzig are on an American tour with all of Beethoven’s quartets in their suitcases: for their upcoming recital at the University of Florida, the audience is invited to vote in advance which three Beethoven quartets the group will perform.

As Sunday’s recital in Oberlin’s Finney Chapel was in the middle of that tour, the Leipzig Quartet chose the Beethoven selections without audience input. It was all Beethoven, early to late. Early: the “Malincolia” (Opus 18, number 6, the most forward-looking of that first set of Beethoven’s work in the genre); middle: the compressed, intense “Serioso,” Opus 95; and late: the odd, imbalanced, and fascinating Opus 127, with its almost overwhelmingly emotional Adagio.

Their choice made for an intense afternoon. Even that early quartet goes far beyond the form Beethoven inherited from Mozart and Haydn, busting the stately minuet of the typical third movement into an odd, off-beat Scherzo, and then loading the fourth movement with a deeply introspective introduction (the titular “melancholy”).

The Opus 18 quartet, though early, clearly looks ahead to the tortured work of the later Beethoven, including the short but powerful “Serioso” quartet, set in a dark F minor, passionate and unpredictable up to the final inexplicable measures, where the darkness suddenly vanishes in a flurry of delicate, swift, and apparently carefree F major.

By ending with the Opus 127 (the first of the great late quartets), the Leipzigers surely meant us to hear how the explosive forms of those masterpieces are products of the same inventive and cantankerous genius. Perhaps, though, on a wintery Sunday afternoon, the point might have been better made with at least one fewer of these solemn offerings – a quartet from Haydn’s Opus 76, perhaps, where the form is at once lightly interrogated and honored.

As one might expect from its longevity, the Leipzig plays with a remarkable uniformity of tone, allowing for impressive balance between sonorities from low to high. The four players clearly know each other’s styles well. Articulation, bow speed, and phrasing are admirably coordinated across the parts. (That was not the case when I heard the Juilliard play earlier this season at Cleveland Chamber Music: changing personnel has led to a significant difference in interpretation among the Juilliard players.)

I appreciated the way the Leipzig knows how to play gestures rather than just notes. In the Opus 18 quartet, for example, played at a sparkling pace, the opening motifs with their complicated little turns were dashed off with panache and musicality. Similar command of Beethoven’s rhetoric was evident throughout the recital.

Unfortunately though, a tight ensemble was often lacking in the Leipzig’s performance at Oberlin. At times, the four players seemed almost to be in their own worlds. Nothing went drastically wrong, but more than occasionally the performers managed Beethoven’s frequent abrupt transitions in different ways. In quartets so marked by quirky starts and stops, that did not contribute to a needed sense of coherence.

It did not help that some of the playing, particularly in the first violin, was ragged; notes in the high passagework were inaccurate, and tuning across the whole ensemble was sometimes shaky.

It may be that this is a result of the quartet’s insistence on keeping a large body of literature in active repertoire at any time. According to interviews on the internet, the players do so because they do not want to over-plan their concerts, to stay “fresh on stage.” However admirable as a goal, that may not be consistent with delivering the kind of precise delivery that audiences now expect of quartets at the level of the Leipzig.

Jackson began the program with a recitation of Langston Hughes’ poem “Helen Keller” — the first of five poems by Hughes that served as interludes between each piece on the first half. END_OF_DOCUMENT_TOKEN_TO_BE_REPLACED

Pianos with pins and tape on strings, a bass drum and tam tam, crotales, Almglocken, and vibes. Microphones were hooked up all around the instruments. The feed was sent to speakers around the room. Lighting designer Nicholas Houfek hung incandescent globes over the arrangement of instruments from thin black wires stretching across the beams. END_OF_DOCUMENT_TOKEN_TO_BE_REPLACED

From the podium, Elim Chan set an ambitious tone for the evening. The rising star conductor, here in her Cleveland Orchestra debut, has a commanding style, and every twist and turn in Saturday’s performance tracked closely with her baton. END_OF_DOCUMENT_TOKEN_TO_BE_REPLACED