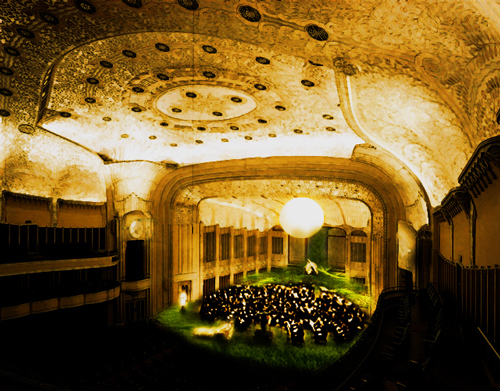 “Severance Hall is going to be turned into a picturesque landscape of nature,” said Julie Kim, director of operations for The Cleveland Orchestra, during a telephone conversation. The outdoors will be brought inside when Franz Welser-Möst leads a cast of internationally-renowned singers in a new production of Richard Strauss’s one-act opera, Daphne, on Wednesday, May 27 at 7:30 pm, and Saturday, May 30 at 8:00 pm.

In part one of this article, Emily MacDonald, who along with her husband, Cameron Jaye Mock, created the scenic, lighting, and projection design for the production, talked about the process they used in making stage director James Darrah’s vision for the opera sets a reality. In part two of this article, Julie Kim describes the role her department played in bringing the design team’s vision to reality.

Kim said that everything started with Darrah’s vision for bringing outdoors inside. “His creative team of set, lighting and projection designers would send us drawings, models and renderings to give us an idea of exactly what it is that they wanted us to build. At first it was all about engaging everyone who would need to be involved in order to build the production — finding the lighting people, the vendors, the painters, the hair and wig stylists, the make-up artists, a props manager, and someone to do the stage management.”

It was technical director John Bukala’s responsibility to build the sets, which he did in a downtown Cleveland warehouse that was rented by TCO. “John is a member of IATSE, Local 27 [the International Alliance of Theatrical Stage Employees] and does a lot of movie set building. He was one of the lead builders of the sets for Captain America. He has a lot of knowledge and experience in building sets. He knows craftsmanship, but he also understands the technical implications of building sets in a place like Severance Hall where space is so limited. He had to figure out how to maximize space while still accomplishing what the director and set designers were looking for — while building everything with an eye on safety. In this production the singers will be up on high risers covered with grass. You don’t want them to fall off. There is also a giant globe hanging above the orchestra.”

Kim said the production requires that additional lighting fixtures be added to the hall in order to provide a palette of color washes. Video projection will be layered on top of the lighting to create a multidimensional set. The lighting effects were accomplished locally by associate lighting designer Christopher Shick. “One of the challenges with Severance Hall is that you can’t really have fixed sets, so the director and the set designers wanted to use the beauty of Severance Hall’s architecture as part of the scenery.

How will the projections in Daphne compare to those used last season in Cunning Little Vixen? “They are extremely different,” Kim said, pointing out that in Vixen the projections and animation were used to help tell the story and create the scenery. “In this production the projection is used to create moods and the feeling of day turning to night, or evoking emotions.”

There are a lot of details and behind-the-scenes work involved in the production and Kim said that almost everything has been accomplished in Cleveland, by Clevelanders. “We did have to purchase the grass from North Carolina — it is artificial grass, but it of a very high grade. And the globe was built in Los Angeles and then shipped to Cleveland.”

What is the most complicated part of Julie Kim’s job? “I think it’s the scheduling and juggling of all the different priorities for each element in the production. Everything has a domino effect on something else. For example we just realized that some of the paint on the grass was coming off onto people’s clothing, so that impacts the wardrobe department because they need to figure out how to protect the costumes. But it also affects the painters because they need to find another kind of paint that isn’t going to rub off. If there’s one change to something, it affects many different departments.”

Published on ClevelandClassical.com May 25, 2015.

The cimbalom was the feature of the show, an instrument capable of taking on many personas. Its performer, Chester Englander, has shaped his career around the instrument, and has inspired composers to write more repertoire for it, some of which was presented on the program. END_OF_DOCUMENT_TOKEN_TO_BE_REPLACED

You wouldn’t expect that acoustic from a glance at the nave, which is wide and long, but not especially lofty. But when I guest conducted a local amateur choir and professional orchestra in Beethoven’s Mass in C there a few years back, during the first rehearsal we released the final chord of the “Gloria” and listened in astonishment for the next several seconds. The sound continued to roll down the space like the big wave that surfers dream about. END_OF_DOCUMENT_TOKEN_TO_BE_REPLACED