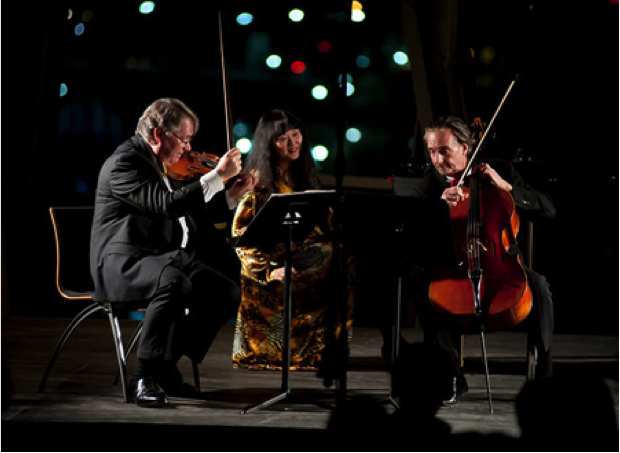 On Tuesday, March 31 at 7:30 pm, Tuesday Musical will present pianist Wu Han, violinist Philip Setzer and cellist David Finckel in a program of Beethoven piano trios at E.J. Thomas Hall in Akron. We caught up with the effervescent Wu Han by cell phone to chat about next week’s program.

Daniel Hathaway: I’m guessing from the calendar on your website that you must be somewhere between Georgia and California.

DH: You have quite a travel schedule. Are you ever home?

WH: Good question! The answer is no.

DH: How do you manage such a busy musical life?

WH: I have a lot of help — people taking care of schedules and reservations for hotels, airlines and cars. All I have to think about is music, music, music, and thank God for that. You have to manage your life. I don’t get bogged down by the details. So you miss your flight? Wow, what’s the big deal? Let’s go have a coffee. Let’s listen to some Spotify.

DH: With your duties at Chamber Music of Lincoln Center and Music@Menlo, you do a lot of flying between the East and West coasts. How do you cope with that special kind of jet lag?

WH: I remember asking Rostropovich that once. He said, “Jet lag, what is that?” If you assume it’s not there, it doesn’t have to be. You have to be quite disciplined because you do get really tired. If you have a concert, you take a half-hour nap. I can manage that. My life is so exciting and so busy, I can’t spend much time thinking about those things.

DH: Has David Finckel’s schedule eased up since he retired from the Emerson Quartet?

WH: David is so busy. We’ve both been on the road non-stop and we miss home terribly. Periodically I will hear him say, “I was supposed to get more time. What happened to that?” We’re going to try to carve out a little more time to be at home, but right now, there are just so many exciting projects that we’re both incredibly busy.

DH: I see that the trio is scheduled to play on a cruise later this season. Perhaps that will give you some time to relax.

WH: You studied my schedule really well! But on that cruise, David has to learn a world premiere trio. We also have two huge projects. One is for Lincoln Center. We’re taking a group of musicians to Shaker Village in Kentucky, where we’ll do a whole documentary. There’s a tobacco barn that David and the presenter turned into a concert hall in the middle of 4,000 acres of Shaker land. We’re also taking a group of musicians to China and Korea in June, so that’s another two brand-new programs we have to learn. Plus, we have thirty schoolchildren coming to the United States in May to have their first Lincoln Center experience. I’m so excited about that. We go pretty much from one project to another, but it’s exciting and we think we really do make a difference in the world.

WH: This project is something David, Phil Setzer and I have been dreaming about for years. Starting with Akron this April, we will be performing all of the Beethoven piano trios — except the one with clarinet. We’ll play six of them across two concerts. Akron will be the first installment of the first program: opus 1, numbers 1 and 3, and then the Archduke Trio. We’ll return to Akron next season to finish the cycle with the “Ghost Trio,” then opus 1, no. 2, and finally opus 70, no. 2.

We actually already tried out the program in West Palm Beach two weeks ago. Originally, the presenter said he liked the idea of an all-Beethoven program, but he couldn’t possibly take all of the trios. Then the audience went so crazy, he asked if we could come back and finish the cycle. Next season we have over 20 concerts for this project. Some presenters are taking it as a two-year cycle, some as a two-day event, and some with all six in one day with a dinner break in the middle. I just can’t believe it. People say classical music isn’t thriving, but I see so many people who are passionate about it.

DH: Beethoven was a young, hotshot pianist when he wrote opus 1, and he obviously wanted to show off his skills. Do things get easier for the pianist between opus 1 and opus 97?

WH: I have to say that for me, all three in opus 1 are the most difficult. It’s the same for the early piano sonatas, like opus 10. You have to play them with the grace of Mozart and the inventiveness of Haydn, but the character of Beethoven. Also they’re very exposed, just like a Mozart sonata.

Beethoven used opus 1 to make a name for himself in Vienna. It was a very important statement for him in terms of publishing. Apparently Haydn heard opus 1 no. 3 and claimed that it was too difficult and advised him not to publish it. But the genius part is that if you look at how he grouped the three pieces all under opus 1, you really understand the thinking behind it.

They’re three drastically different pieces. No. 1 is delightful and joyous. No. 2 is grand and like a symphony, but it has the wackiest last movement. No. 3 is tragic, dramatic and depressing. He used these three pieces to show the dimensions he could produce. And this was the first set of trios he wrote on a grand scale. I don’t think you’ll find a four-movement trio in Mozart or Haydn. This was the first time he put in a scherzo and a substantial slow movement. So the opus 1 trios represent a landmark in Beethoven’s compositions. I’m so in love with these pieces. Apparently he earned something like two years’ salary out of these three works. They’re totally fascinating and totally out of the ordinary. They’re not like any trios you’ve heard before.

The Archduke is a completely different story, of course. You can really tell the difference between the early period and the heroic period. Opus 97 stands by itself — sort of like the opus 74 “Harp” Quartet. It’s so unusual. Who could imagine bird calls in the middle of a trio, or following the most profound slow movement with a German beer-drinking song? It really has everything from the most earthy to the most sublime. And that’s what makes Beethoven so special and so fantastic. I talk too much!

DH: No you don’t! And I understand you’re going to be giving the pre-concert lecture before the Akron concert.

WH: Yes. Phil and I will take some of the pieces apart and show the audience this and that so they can understand things from the performers’ point of view.

DH: I joke about the fact that you’re the longest-living piano trio without a name. And nobody knows what order to list your names in.

WH: (Laughs) It’s deliberately done that way. When we first started to play as a trio, everybody asked us for a name. We all decided that once we had a name, nobody would know who we were. You know how many times David and I played recitals in the same season as the Emerson Quartet. The Quartet would go first, and after we played our recital, without fail someone would walk up to David and say, “You know, you look very familiar.” And he would say, “Oh, I don’t think so.” If you asked people who the second violinist in the Emerson Quartet is, they wouldn’t know, but they would know about the Quartet.

Another thing about this trio is we love playing with each other so much. We decided that if we didn’t take on a name, we’d be sure to continue. It’s like a short-term commitment, and we go from season to season. Every year our manager calls us and asks if we still want to do the trio. I say, “Let me think about it. I’ll ask the others.” I’m not kidding. We never officially formed the trio.

DH: And how many years have you been playing together?

WH: We started with Schubert, just as a project. We gave our manager, David Rowe, a 14-day period. He booked 12 of them, and all the presenters asked if we could do a second year. Next came Mendelssohn, then Dvořák. It’s very repertoire-driven. There’s zero career talk, no mention of publicity photos or PR and all that. It’s just, ‘let’s play Beethoven trios. Let’s make a tape. That sounds really good, maybe we should record it.’ It’s like that. It’s kind of funny.

END_OF_DOCUMENT_TOKEN_TO_BE_REPLACED

Rodgers & Hammerstein’s Cinderella was originally produced for television in 1957 — seven years after the animated Disney film was released — and starred Julie Andrews. According to the Rodgers & Hammerstein website, it was viewed by over 100 million people. END_OF_DOCUMENT_TOKEN_TO_BE_REPLACED

The story line has its origin in an 1855 play and an 1842 farce that Thornton Wilder mined for his 1938 play The Merchant of Yonkers. When that turned out to be a flop, in 1954 Wilder made the crucial decision to re-center the show around the character of the legendary marriage broker Dolly Gallagher Levi and renamed it The Matchmaker. END_OF_DOCUMENT_TOKEN_TO_BE_REPLACED

The Dodero Center for the Performing Arts at the Gilmore Academy in Gates Mills is one feature of an impressive campus. The auditorium is shallow, the stage is deep, and the ensemble played without a shell. Throughout the program, the sound, especially in instruments’ lower registers, tended to disappear. END_OF_DOCUMENT_TOKEN_TO_BE_REPLACED