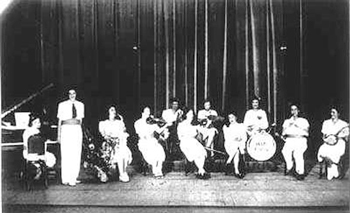 Last Sunday afternoon, December 6, The Cleveland Women’s Orchestra, under its Music Director and Conductor Robert Cronquist, presented “A Commemorative Program in Memory of the Women’s Orchestra at Auschwitz” at Kangesser Hall at The Park Synagogue in Cleveland Heights. The event received support from Violins of Hope Cleveland and The Cleveland Jewish Federation. Robert Conrad, President of WCLV, acted as host and introduced each work. It was a lively and interesting concert.

Hyman Schandler, a Cleveland Orchestra violinist and violin teacher, formed the Cleveland Women’s Orchestra in 1935 with the mission of creating an ensemble that would give talented women a chance to perform at a time when they could not easily be involved in professional groups. 60 women showed up when he announced his first rehearsal and he never looked back. He remained as the group’s director for an astonishing 55 years, watching it gain large audiences, win awards, offer guest appearances by internationally-known artists, and beginning in 1936, present an annual spring concert in Severance Hall. Schandler directed the Orchestra until his death in 1990, when his longtime friend and colleague Robert Cronquist took over the reins. 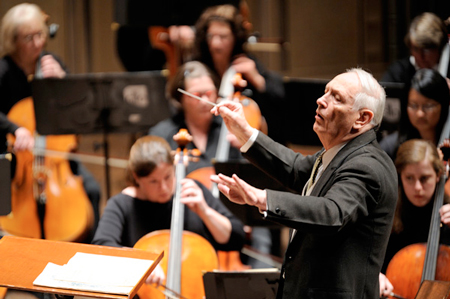 The inspired idea to give a concert in memory of The Women’s Orchestra of Auschwitz evolved out of the Violins of Hope project, four months of events sponsored by important Cleveland arts and education institutions that feature Holocaust era instruments restored by Israeli violin maker Amnon Weinstein.

The original concept for a women’s orchestra at Auschwitz came from Maria Mandel, SS Commander of the women’s camp. A music lover and ambitious Nazi, she moved mountains to create the group. Part of its ghastly function was to calm new arrivals so that they would go willingly to the showers (actually gas chambers).

The orchestra improved artistically with the arrival of famous professional violinist and conductor Alma Rosé in June, 1943. Rosé was the niece of Gustav Mahler and daughter of Arnold Rosé, a violin virtuoso who served for 50 years as concertmaster of the Vienna Philharmonic. Using her position to improve the circumstances of her sister prisoners, Rosé expanded operations to include copyists and secondary assistants whose tasks didn’t require musical ability. Though she died of suspected food poisoning in April 1944, nearly all the members of her ensemble survived the war. 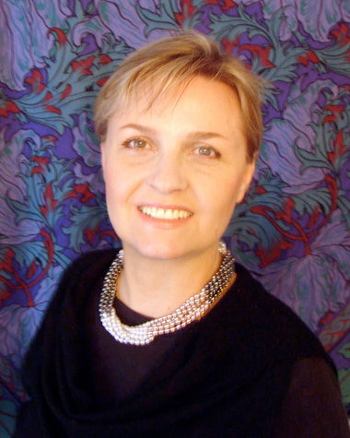 Korngold left Vienna in time to avoid the Holocaust and landed in Hollywood to become a stellar film composer and to continue his classical output. He had composed Die Tote Stadt (The Dead City) in 1920 at age 23. He and his father, Julius, adapted Belgian Georges Rodebach’s rather grisly play, Bruges-la-Morte for the opera stage, changing the frightening murder scene into a dream.

Marietta’s Lied received a lovely, sensitive performance by Sobieska and the Orchestra. Cronquist balanced the complex orchestral texture, allowing Sobieska’s voice to be heard even in the low register passages. Some syncopations and colorful eighth notes in the harp ornamented the orchestration. Sobieska’s lovely expression on the words, “If you must leave me one day, believe there is an afterlife,” made for a gorgeous close.

Her performance of In Mir Klingt Ein Lied was equally entrancing. As Bellini proved so many times, Chopin’s melodic style translated beautifully to the human voice. Although not indicated in the program, concertmaster Joan Ferst revealed that Robert Cronquist provided the skillful orchestration. Sobieska’s concluding soft octave shimmered with expression.

The balance of the concert, though equally attractive, consisted of more conventional programming. Schubert’s Unfinished Symphony received a fine performance, but the important first-movement sforzandos should have been more penetrating. The second theme was appropriately graceful and elegant. The second movement’s woodwind solo passages shined. Cronquist carefully shaped Brahms’s haunting duple rhythms in the Hungarian Dance No. 1, and followed it with a flexible and graceful interpretation of Johann Strauss Jr.’s elegant waltz, On the Beautiful Blue Danube. 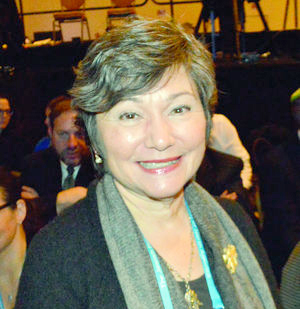 Hedy Milgrom, a member of the Women’s Orchestra for 35 years, Senior Vice President and Chief Development Officer of the Jewish Federation of Cleveland, and an important liaison in bringing this concert to fruition, presented brief and insightful personal reflections. Both of her parents, as well as her mother’s twin sister, were Holocaust survivors. Born in Chicago, she began playing the violin at age 9 and has continued to play it all her life. After an active career in arts management, she now serves on the board of the Park Synagogue.

Every so often, the first seconds of a concert bring neither anxiety over how the rest will go nor twitchy overstimulation, neither boredom nor ecstasy, but a satisfying assurance. Some performances click right away, the musicians’ technique unimpeachable, their artistry and expression powerful, their manner warm but professional. Such concerts hold attention in a special way — the chances of a misstep negligible enough that listening never involves comparison to an abstract standard. In the Phaeton Trio’s recent tour de force in Rocky River, the initial gestures of the performance set a high standard that held throughout. END_OF_DOCUMENT_TOKEN_TO_BE_REPLACED

Musicians love a good metaphor: take, for instance, that of summiting a mountain. When a violinist speaks this way after playing all of Bach’s partitas, or a soprano recalls preparations for a Wagner opera, the image of the artist mounting some hostile peak offers implications of persistence, struggle, and of course triumph. Pianists might describe Beethoven’s sonatas this way. But how many have actually played at the top of a mountain? Archival video confirms that French pianist Pierre Réach literalized this image of the soloist at the summit over twenty years ago. A recent concert in Cleveland confirmed that the figurative Everest of Beethoven’s piano music still bears his banner as well. END_OF_DOCUMENT_TOKEN_TO_BE_REPLACED

The Cleveland Orchestra — or at least half of it — marked Valentine’s Day with a straight-through, 50-minute concert led by Belgian early music guru Philippe Herreweghe. The February 14 performance, marketed as a romantic evening of orchestral classics, played to a packed house (marketing works!). END_OF_DOCUMENT_TOKEN_TO_BE_REPLACED

Music is said to be a universal language, but it does speak with different accents. When you’re playing music by Jean Sibelius, it’s helpful to have a Finnish conductor on the podium, which is what made Susanna Mälkki’s pair of Cleveland Orchestra concerts so lucid and communicative earlier this month. END_OF_DOCUMENT_TOKEN_TO_BE_REPLACED