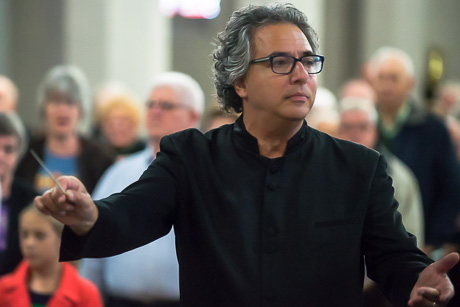 There is no one path that a person follows to become a conductor. Raffaele Ponti’s early musical training came via the piano, violin, and later trumpet. That instrument led Ponti to the Cleveland Institute of Music where he was a student of Bernard Adelstein, the legendary principal of The Cleveland Orchestra — Ponti was also fortunate enough to play with that orchestra on numerous occasions. After graduating from CIM, he went to Italy to study conducting first in Siena, and later in Rome with Giuseppe Sinopoli.

On Sunday, September 25 at 2:30 pm in Stambaugh Auditorium, Ponti will lead the Youngstown Symphony in a program titled “Autumn Ablaze,” featuring Brahms’ Symphony No. 1, Glinka’s Ruslan and Lyudmila: Overture, Puccini’s I crisantemi   — The Chrysanthemums —  and Stravinsky’s Suite from The Firebird. Click here to purchase tickets.

I caught up with the maestro by phone, and began by asking about the program’s title.  l

Raffaele Ponti: I didn’t come up with it, but it’s great and appropriate to the season. And there are some elements in the programming that hint to that. The Firebird for example, and of course a Chrysanthemum is a flower. Then there’s the beautiful landscape of the Brahms

Mike Telin: Wearing your conductor hat, how do you see the works fitting together?

RP: For me, the idea is that I need to prepare a musical menu for the audience that from the openingh downbeat to the last note of the performance, is going to be musically, spiritually, and emotionally satisfying.

This program is diverse by composer, country, and by musical style. You play Brahms with a different style than you play Stravinsky. We know that Puccini wrote these incredible operas, but I crisantemi he wrote early in his career. Not many people are familiar with it but it is absolutely gorgeous, and he used both themes from this short work in his opera Manon Lescaut. The Glinka is a great overture. The opera is never performed anymore, but the overture stands alone as a great piece to get the concert underway.

As you’ve probably noticed, I’m not bringing a guest artist. I am a conductor that came out of the orchestra, and I feel that the real stars of any orchestral program are the orchestra.

MT: Have you conducted Youngstown before?

RP: At a pops concert last season with Jim Brickman. It was my first time with the orchestra and at the first rehearsal I was very impressed with the sound they produced, and with their musicianship. I’m very happy that they invited me back.

When I am on the podium the relationship is between me and the composer — do I really understand Brahms’ intentions in the score?

MT: I was listening to an interview you recently gave and you said that the word ‘organic’ is important in music-making. Can you expand on that thought?

RP: What I mean is that it has to sound natural. Sometimes you hear a performance where the conductor is trying to make too much out of something that really isn’t there, like playing a passage too slow in order to milk it. You can also tell when someone is conducting the melody, and that’s not what you should be conducting, you should be conducting the motor of the piece — whatever the driving force at any given moment is.

I want the musicians to play like they are a string quartet — on the edge of their seats, breathing together and looking at each other. The acoustic of the hall also figures into the mix. But it is all about creating a situation where it becomes their performance.

MT: I love the story of how you came to play the trumpet. Please share it.

RP: I grew up in Rochester, but my parents grew up in Italy during Mussolini’s time, and things in Italy were tough, so they came to the U.S. looking for opportunities. My parents both loved music — I grew up hearing opera recordings in the house.

Anyway, my mother said,“You’re going to play the violin because it is a beautiful instrument.” But as often happens, because of economic problems the school had to disband the string program.

Two weeks later I was called to the band room and given a trumpet. I was the worst trumpet player in the middle school band. I was the last chair — I didn’t like it and I had no interest in it.

Then in 8th grade the band director would randomly call on someone to stand up and play a scale. I kept thinking no, not me. Then one day he said “Okay Ponti, stand up and play an F-major scale — and I couldn’t do it. I sat down totally humiliated.

But I went home and over dinner — in every good Italian family, problems are solved over dinner, and my dad asked me how school had gone and I told my parents that I wanted to take private lessons. Thought, I’m going to prove to that guy that I can play that scale.

The funny thing was, my dad was a barber and knew everybody, so by the time I got home he already knew what had happened — he asked me just to see if I would tell him. Anyway, he found me a teacher who was a grad student at Eastman. And in a year I went from last chair to first. It gave me an identity — I was finally good at something. I wasn’t good at algebra, or science. I couldn’t kick a football, but music gave me the opportunity to be somebody. To fit into something bigger than myself.

So I owe everything to my middle school band director.