The first round of the Oberlin Cooper International Violin Competition got underway on Saturday, July 20 — the first step in the process that begins with twenty-four young violinists aged 13-18 and will ultimately bring three finalists together for concerto performances with Jahja Ling and The Cleveland Orchestra next Friday evening, July 26 at Severance Hall. On Friday, we spoke with jury members Gregory Fulkerson and David Bowlin and four of the competitors — Gallia Kastner, Kristie and Karen Su and Jieming Tang — to gain their insights into what makes music competitions worthwhile and to learn a bit more about what makes four of the young players tick (links to audio at the end).

Oberlin violin professor Gregory Fulkerson, who is chair of the competition, is excited about the field of competitors. “We could not be happier with the quality of this year’s contestants,” he told us in his studio at the Oberlin Conservatory. “These are the future stars of the violin world.”

We asked David Bowlin, assistant professor of violin at Oberlin, why it’s important for young musicians to play in such competitions. “Good question, because on the surface it’s easy to think that competitions are something that brings out the worst in us, but I think that’s the wrong way to look at it. If students go in with the idea that they are entering a competition as a challenge to themselves – to learn repertoire, to perform in front of an audience, to perform in front of a jury from whom they have the opportunity to receive feedback — the intensity of a competition makes it powerfully educational.”

In designing the requirements for the Cooper Competition, the committee wanted to make sure that the required works were appropriate to the ages of the contestants (13 to 18) and that the pieces came from the mainstream classical repertoire. Similar youth events like the Menuhin Competition served as guidelines. “There are 35-minutes of recital repertoire plus a full concerto,” Fulkerson noted, adding that certain requirements like a Bach piece, a work by Mozart and Beethoven, a Paganini Caprice and a “brilliant concert work” are there for a reason. “Bach shows what the player is capable of doing,” Fulkerson says. Bowlin agrees. “You can tell a lot about a player based on how they play Bach.”

“Mozart and Beethoven show certain aspects like rhythm and can quickly assess the player’s musical maturity,” Fulkerson added. “The slow movement of a Mozart concerto demonstrates the ability to create a lyrical line.” “Musically, Mozart is very advanced,” Bowlin says. “It requires a lot of thought and feeling and if you just play the notes it doesn’t come alive. Mozart does require a certain level of musical maturity.” He feels the same is true about performing a Beethoven sonata. “Like Mozart, it’s about style, refinement and musical expression.” As to the other required composer, Fulkerson believes “it takes courage to play Paganini.”

Besides the cash prizes, a major draw of the Cooper Competition is the nature of the finals. “The opportunity to play with The Cleveland Orchestra, I think that is the most amazing aspect of this competition,” Bowlin says. “For a young person just beginning their career it is an incredible opportunity. “They’ve been wonderful to work with during the planning process,” Fulkerson says of the orchestra, “making themselves available for concertos such as Shostakovich and Prokofiev.” 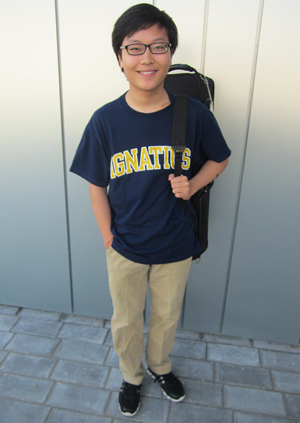 Tang was “thirteen and really young” the first time he competed. “I was going to go back to China this summer, but because the air fares went up two or three times, I stayed here. I applied to the Cooper just two days before the deadline.”

Kastner had a “nightmare on stage” two years ago, when her e-string popped during her performance and subsequently she didn’t advance past the first round. “I came back because I thought maybe this time that wouldn’t happen — and I have gotten better!”

Kristie Su, 18, and Karen Su, 14, are sisters from Rolling Hills Estates, CA. Both began violin studies with their father, Elmer, at the age of three then moved on to study with Vesna Gruppman a few years later. They may be the first pair of siblings ever to compete in the same Cooper event, and miraculously ended up drawing the first and second places in the performance order. How did they learn about the Cooper? “We found it online,” said Karen, who shared the information with her sister. “And surprising, we both got in,” added Kristie. “We didn’t think we would end up at the same competition together. Karen is the youngest competitor, and I’m very proud of her.”

How do they prepare for a contest like the Cooper? Gallia Kastner says “first, I know that I need to take the pieces to a different level,” adding that in a competition you have to do everything right. “I take each piece apart very carefully.” She thinks that preparing for a competition is great because it teaches you how to be a “real musician.” 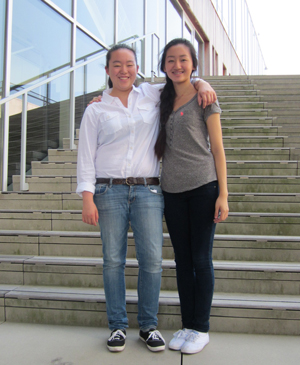 Jieming adds that competitions are immensely useful in his development as a player. “During a competition I get to see if improvements really work, and find new problems to work on after the competition. Watching others is a huge learning experience, and the comments from the jury tell me the key things I need to work on.”

We asked all four how they had arrived at their competition repertoire. “My teach makes suggestions and then I pick,” Gallia said, adding that she also wants to choose pieces that show her in the best light. “All of the pieces I’ve picked have different personalities.” She has performed most of the pieces in the past with the Chausson Poème being the most recent acquisition to her repertoire. Regarding her choice of concertos, she said “the Brahms is a long piece…It’s emotionally and physically draining,” adding that she has performed it with orchestras in the past.

“Different stories,” said Jieming Tang about his repertoire. “I chose some because they were familiar and I didn’t have much time. Some I liked since I was really little, like the Introduction and Rondo, which I tried to play when I was 8. Also the Vitali Chaconne. I heard Heifetz play it with organ. It was so magnificent I really wanted to play it. The Chaconne is the ‘piece of my choice’. The Saint-Saëns is the ‘brilliant concert work’. The newest is the Paganini. I only took a few lessons on it; the others I’ve played before.” 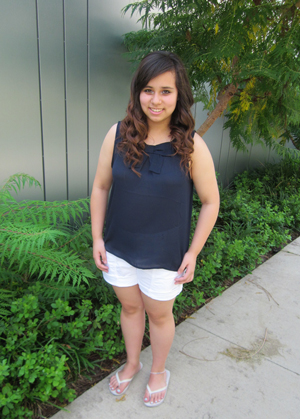 “That’s a good question” says Kristie Su, as she and Karen both laugh, saying that their father did have a little bit of influence on the decisions. For Kristie, some of the pieces are works she has played in the past although the Beethoven sonata is new. Most of Karen’s repertoire is relatively new to her except for her choice of the Concerto #2 of Wieniawski. Do either of them prefer one style of music over another? “No, I like them all” Karen quickly answers, while Kristie says she “strongly prefers” music from the baroque and romantic periods. “I feel more in touch with the baroque and I like what happens harmonically in especially the late romantic.”

“I tend to like everything,” Jieming Tang told us, “but I prefer anything before the 20th century. A lot of people like the new stuff but maybe I’m just not good enough. I don’t hate it, I’m just indifferent.”

Perhaps unlike young prodigies in past generations, the Cooper participants we spoke with live remarkably well-balanced lives. Asked what they do outside the practice room, Kristie and Karen Su simultaneously say “eat and talk on our phones,” adding that they are typical teenagers. They watch Food Network shows such as Chopped and Cupcake Wars. They confess that Karen in “really into pastries” and Kristie is “really into entrees.” Kristie was on her high school debate team “I am spread in terms of my interests…I also like art.” She also says that she has thought about politics but feels more suited for a career in music. “I feel more passion for music then any of my other interests.” Next year, Kristie will continue her studies in Rotterdam and Karen will return to high school. And what is her favorite subject? “Dance class. I like dance, but English is OK too.”

“I do a million things,” said Jieming Tang. “I have a lot of hobbies but not enough time after violin. Photography, aviation — I’m not old enough to be a pilot so I fly RC airplanes, but I hope to get a license. I like crafting, making models, reading, video games.” Academically, he enjoys history. “The textbook can be boring but generally it’s very interesting to learn. And PE. It’s the only time I can schedule exercise.”

Gallia Kastner used to be a competitive swimmer, which gives her an insight into different kinds of competitions. “In sporting competitions, once you make a mistake it’s over, whereas in a music competition you keep playing the piece, you still have a chance. I think that music competitions are way more scary then a swim meet.” Although swimming is in the past, she takes pleasure in walking her dog, Schubert, and enjoys reading and keeping in touch with friends via social media. As far as a favorite school subject goes,“I like English a lot. I’m the one weird person who likes writing essays,” she says, adding that the stereotype that all musicians are good at math is “not true.’

Photos of competitors by Daniel Hathaway.

Listen to audio tracks of the interviews:

Music director and conductor Daniel Meyer built his playlist around Cleveland themes and scenes. “Exploration CLE” made use of engaging selections from the classical canon and beyond that celebrated “what makes Cleveland so special.” Happily, he and his musicians avoided constructing a visual slide show, choosing to let the music speak for itself. END_OF_DOCUMENT_TOKEN_TO_BE_REPLACED

You could see the relationship at work on a practical level. Repertoire for two players at the same piano requires a certain choreography. There’s just one of each pedal to share, and the hand crossings left and right — which can be so fun to watch a soloist pull off — get more complicated when another person’s involved. At times, Pompa-Baldi drew a hand away from the keyboard and into his body, making room for Friscioni, and at the close of a few delicate phrases, the two were crouched together over the same final notes at one end of the instrument. END_OF_DOCUMENT_TOKEN_TO_BE_REPLACED

The signature sounds of these famous film scores are not so much John Williams’ invention as allusions to other classical pieces. The foreboding half-step from Jaws, growing more and more furious in the cellos and basses, shares something with Dvořák’s “New World” Symphony and Bartok’s Miraculous Mandarin. END_OF_DOCUMENT_TOKEN_TO_BE_REPLACED