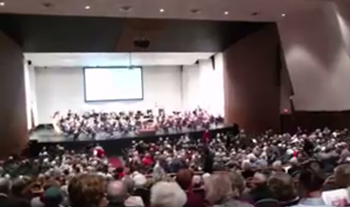 On one level, the January 28 concert by the Canton Symphony Orchestra, billed as “A Night in Vienna,” was unarguably a dazzling homage to Strauss family waltzes and polkas. But on quite another, it was an unprecedented occasion for some memorable shenanigans on the part of music director Gerhardt Zimmermann.

The evening commenced with the overture from Pique Dame (Queen of Spades), an adventurous love story in two acts by Franz von Suppé, who had emerged as the preeminent champion of the Viennese operetta by the late 19th century. The overture is a cunning romp through both comical and mysterious musical episodes interwoven with a sparkling flute melody. Towards the end, tension builds and gives way to a jocular evocation of galloping at ever-increasing speeds, clearly leaving the audience here in breathless wonder. The remarkably impish and ebullient energy of the orchestra was a harbinger of titillating things yet to come on this occasion, but not before a complete change of pace and mood ensued with the next work on the program.

A far cry from the exuberance and velocity of Pique Dame, the performance of Franz Schubert’s Symphony No. 8 (“Unfinished”) was nonetheless utterly mesmerizing in its lyrical depth. Despite its unfinished state, Schubert’s work presents us with some of the most achingly beautiful melodies in the symphonic tradition. It’s fitting that here, a palpable aura of warmth seemed to settle over the orchestra. Call it an extraordinary reverence for the emotive impact of the piece. Riveting in its tonal nuances, the ensemble successfully articulated all the dramatic capacity of the music to evoke a spirit at once fiercely noble and melancholy.

Unfettered joie de vivre returned for the opening selection of the evening’s second half.  Associate conductor Rachel Waddell led the ensemble through the many thematic twists and turns of Zigeunerbaron (Gypsy Baron) Overture, by Johann Strauss, Jr. This lushly orchestrated work is a bubbly, hot stew of piquant gypsy tunes and Viennese waltzes, and a perfect vehicle for Waddell’s distinctively animated conducting style. Yet far from being extraneous or distracting, her demeanor was wholly appropriate to the character of the music. She often leaned into the ensemble, swaying left and right, her arms sweeping the air in wide, pulsing arcs. Even her fingers were expressive, seeming to tickle the orchestra into a thoroughly exhilarating response.

Zimmermann returned to the podium for the evening’s remaining selections of polkas and waltzes. Not surprisingly, the caliber of CSO artistry was unimpeachable throughout. Particularly memorable, though, was watching how Zimmermann morphed into what could fairly be called the Minister of Mischief. His attitude at the podium was often so casual that he wasn’t really conducting the ensemble at all, instead mugging to the audience while engaging in various incidental activities.

During Unter Donner und Blitz (Thunder and Lightning Polka) by Johann Jr., for example, he opened an umbrella after being spritzed with water by cellist Michael Kosko. For Josef Strauss’s Jockey Polka, which he dedicated “to those enrolled in Gamblers Anonymous,” Zimmermann was the featured soloist, so to speak, adding the rhythmic, percussive sound effects of the jockey’s whip right on cue. Talk about slapstick humor. And the crowd-pleasing antics didn’t stop there.

After a magnificent performance of Johann Jr.’s Kaiser-Walzer (Emperor Waltzes), the orchestra was equally inspiring in an encore performance of the composer’s An der schönen blauen Donau (By the Beautiful Blue Danube). Following that, for the Champagne Polka, Michel Kosko again approached the podium to pour champagne for himself, concertmaster Vivek Jayaraman, and a delighted (and apparently very thirsty) Zimmermann, who in turn offered a glass to an audience member seated in the front row. Closing out the proceedings, Zimmermann stirred up the house with a gleeful clap-along rendering of Johann Strauss Sr.’s Radetzky March. In the end, while the champagne may have been the cheap stuff, this portion of the evening was top-of-the line fun, and an otherwise rich celebration of the Strauss legacy.

The cimbalom was the feature of the show, an instrument capable of taking on many personas. Its performer, Chester Englander, has shaped his career around the instrument, and has inspired composers to write more repertoire for it, some of which was presented on the program. END_OF_DOCUMENT_TOKEN_TO_BE_REPLACED

You wouldn’t expect that acoustic from a glance at the nave, which is wide and long, but not especially lofty. But when I guest conducted a local amateur choir and professional orchestra in Beethoven’s Mass in C there a few years back, during the first rehearsal we released the final chord of the “Gloria” and listened in astonishment for the next several seconds. The sound continued to roll down the space like the big wave that surfers dream about. END_OF_DOCUMENT_TOKEN_TO_BE_REPLACED