When inclement weather forced the cancellation of the Akron Symphony’s January 2019 concert, the solution was simple: reschedule the all-Russian program as the opening concert for the following season. On Saturday, September 21 in E.J. Thomas Hall, guest conductor Benjamin Zander and the ASO presented that program, and the results were worth waiting for. Throughout the evening the strings were supple and full-bodied. The winds sparkled. The brass were majestic.

Those qualities, along with precise ensemble and impeccable intonation, resulted in a distinguished performance of Tchaikovsky’s Symphony No. 4. As we have come to expect from Zander, his musical plan was thoughtful — he drew long phrases and unblemished transitions from the players during the opening movement.

Flutist Barbara O’Brien, oboist Terry Orcutt, clarinetist Heidi Aufdenkamp Peck, and bassoonist Todd Jelen all contributed notable solos, especially during the second movement, Andantino. Zander also has a penchant for leaving nothing to chance. He set a safe tempo during the Scherzo, resulting in a performance that never quite took flight. However, this approach served the Finale well. The opening was fiery and the conclusion noble.

There are certain pieces of music that always sound new and never fail to excite, no matter when they were written. One of those is Prokofiev’s Piano Concerto No. 3. Though it’s a daunting work for any soloist, Alexander Korsantia was in full command of every technical challenge the piece presented. His playing easily shifted from bombastic to elegant, exhilarating to reserved. In spite of some disagreements in tempo between pianist and podium, what people always go away remembering is the work’s tour-de-force conclusion, and Korsantia and the ASO nailed it. Acknowledging that the audience clearly wanted to hear more from him, the pianist offered up another Prokofiev selection — the Visions Fugitives No. 10. 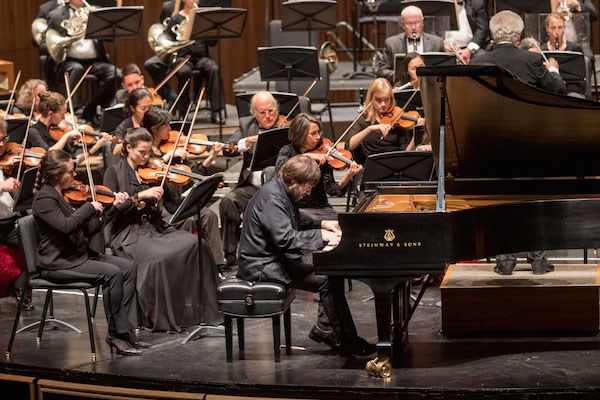 The evening opened with a fast-out-of-the-blocks performance of Glinka’s Overture to Ruslan and Lyudmila, and a sublime delivery of Mussorgsky’s “Dawn on the Moscow River” from Kovantchina.

The ASO is an orchestra that deserves to be heard by a wider audience, and Akron is not that far from Cleveland. Choose a concert and make the trip.

END_OF_DOCUMENT_TOKEN_TO_BE_REPLACED

Supported by engagingly, yet simple staging by Cara Consilvio, a well-prepared cast of singers told the archetypal story of Cinderella with charm and flair. Framing the production was  a sparse but colorful set and wonderful lighting by Dave Brooks. END_OF_DOCUMENT_TOKEN_TO_BE_REPLACED