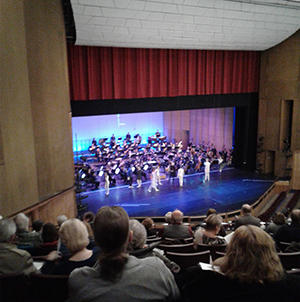 Friday’s performance of Petrushka completed the Akron Symphony’s triptych of Stravinsky ballets, which has already seen performances of Firebird and The Rite of Spring. Petrushka marked the second collaboration between the ASO and Robert Wesner’s company, and the complement of dancers included the University of Akron’s Dance Institute, Christina Foisie, director.

Stravinsky’s score was presented in its 1947 version (the ballet premiered in 1911 by Diaghilev’s Ballets Russes), the Akron Symphony occupying the back half of the stage, leaving abundant room for dancers at the front.

The addition of choreography is a boon to the audience — who hasn’t sat through concert performances of Petrushka wondering what sight gag inspired a particularly colorful bit of music? The Orchestra gets wonderfully evocative material to play, and Christopher Wilkins and the ASO musicians had great fun with it. Gary Davis, playing principal trumpet for the evening, was a standout among the soloists.

Wesner’s choreography was finely tuned to the events in the score and drew from a catalogue of angular, stylized movements. He filled the stage with eye-catching action. Costumes were mostly stark white and simple, and some of the principal dancers resembled speed skaters in their tight body suits. The curtain call was fun, turning into a cheerful melee of balloons (watch videos here and here). 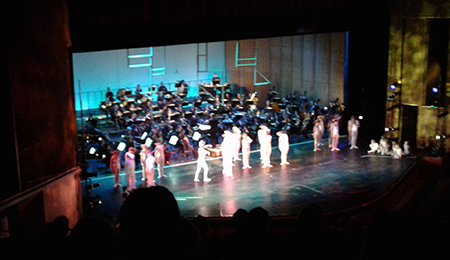 In keeping with the Carnival theme, the evening opened with an animated performance of Berlioz’ Roman Carnival Overture distinguished by Cynthia Warren’s English horn solos, and continued with Nino Rota’s Ballet Suite La Strada, from the score to the 1954 Fellini film, which takes place at a circus. Yes, it sounds like a cousin to The Godfather — same composer — and yes, it made an interesting companion piece to Petrushka. The ASO musicians gave it a colorful reading.

END_OF_DOCUMENT_TOKEN_TO_BE_REPLACED

Rodgers & Hammerstein’s Cinderella was originally produced for television in 1957 — seven years after the animated Disney film was released — and starred Julie Andrews. According to the Rodgers & Hammerstein website, it was viewed by over 100 million people. END_OF_DOCUMENT_TOKEN_TO_BE_REPLACED

The story line has its origin in an 1855 play and an 1842 farce that Thornton Wilder mined for his 1938 play The Merchant of Yonkers. When that turned out to be a flop, in 1954 Wilder made the crucial decision to re-center the show around the character of the legendary marriage broker Dolly Gallagher Levi and renamed it The Matchmaker. END_OF_DOCUMENT_TOKEN_TO_BE_REPLACED

The Dodero Center for the Performing Arts at the Gilmore Academy in Gates Mills is one feature of an impressive campus. The auditorium is shallow, the stage is deep, and the ensemble played without a shell. Throughout the program, the sound, especially in instruments’ lower registers, tended to disappear. END_OF_DOCUMENT_TOKEN_TO_BE_REPLACED