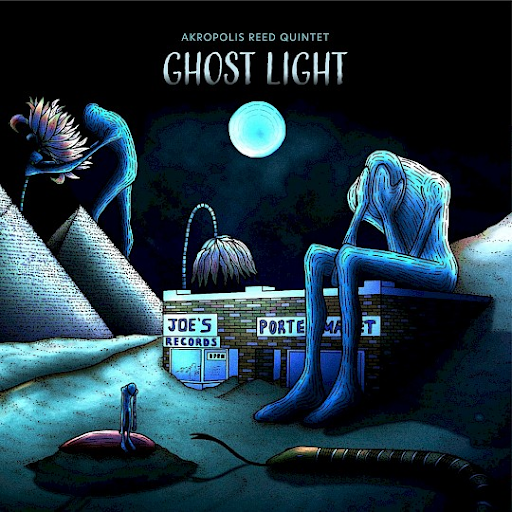 In darkened theaters around the world last year, just one small sign of life remained — the ghost light, a single bulb traditionally placed onstage overnight while the space is unoccupied. During the height of the COVID-19 pandemic, these ghost lights became small symbols of hope, keeping the lights on until the performers and the audience could return again.

It’s particularly fitting, then, to make Ghost Light the title of an album that explores the cycle of life, death, and rebirth. In the Akropolis Reed Quintet’s latest release, oboist Tim Gocklin, clarinetist Kari Landry, saxophonist Matt Landry, bassoonist Ryan Reynolds, and bass clarinetist Andrew Koeppe present five captivating pieces that embrace the ghosts of the past while looking towards the future.

The life cycle of the album begins with Stacy Garrop’s Rites for the Afterlife, a four-movement work depicting a soul’s journey after death based on ancient Egyptian tradition. The opening “Inscriptions from the Book of the Dead” showcases the crystal-clear articulations, expressive dynamics, and rhythmic confidence that are the foundation of this album’s performances.

Garrop’s work isn’t the only one to address death — Firing Squad by Niloufar Nourbakish, placed near the album’s midpoint, gives a look into the mind of someone facing imminent execution. Layered on top of the performance is an altered recording of the Akropolis, which adds an eerie feeling. The group’s convincing changes of mood and style take the audience through all the stages of grief before everything is swallowed up by an overwhelming wall of sound and a final exhalation of breath.

By contrast, Theo Chandler’s Seed to Snag contemplates a life just beginning to bloom. As soloists, all five players are in fine form here — particularly Reynolds, whose mournful bassoon solo in the second movement showcases the gorgeous middle range of the instrument, inspiring clever tradeoffs with his fellow players to keep the line going. The playful finale, “Sow,” brings back the layered trills from the first movement to begin the plant’s life cycle again.

One of the most characteristic attributes of a reed quintet is the ensemble’s five distinct timbres, and in Michael Gilbertson’s Kinds of Light, the composer emphasizes this quality by limiting rhythmic and harmonic variance. Throughout the four brief movements, the group moves as one entity — let your ears zoom out and everything blends well together, but focus in and you can pick out each instrument’s complexities.

The Akropolis strengthen their connection to their home base of Detroit with the last and longest work on the album — Jeff Scott’s Homage to Paradise Valley. The piece is a reflection on the history of Black Bottom, a thriving, predominantly Black community in the city that was demolished in the mid-1900s. Poetry by Detroit’s own Marsha Music precedes the first, second, and fourth movements, its loose, rhyming structure setting the scene for locations like the bustling Hastings Street and the beloved Paradise Theater.

The history of the neighborhood evolves in a series of musical vignettes, ranging from the somber yet hopeful “Ghosts of Black Bottom” to the lively, blues-inspired “Paradise Theater Jump!” An energetic bass clarinet solo in “Hastings Street Blues” showcases Koeppe’s dexterity on the instrument, while the following “Roho, Pumzika kwa Amani” (Spirits, Rest Peacefully) is a tranquil lullaby. Scott, who is the associate professor of horn at Oberlin Conservatory, wrote in his program notes that the movement is “my humble offering to the souls who came before me and persevered through the middle passages, decades of slavery, disenfranchising laws, and inequality.”

In her final poem, Music reflects on the bridges between the past, present, and future, a theme every piece on Ghost Light explores.

“The spirit of those times, you see, lives on inside us — you and me /

The cimbalom was the feature of the show, an instrument capable of taking on many personas. Its performer, Chester Englander, has shaped his career around the instrument, and has inspired composers to write more repertoire for it, some of which was presented on the program. END_OF_DOCUMENT_TOKEN_TO_BE_REPLACED

You wouldn’t expect that acoustic from a glance at the nave, which is wide and long, but not especially lofty. But when I guest conducted a local amateur choir and professional orchestra in Beethoven’s Mass in C there a few years back, during the first rehearsal we released the final chord of the “Gloria” and listened in astonishment for the next several seconds. The sound continued to roll down the space like the big wave that surfers dream about. END_OF_DOCUMENT_TOKEN_TO_BE_REPLACED