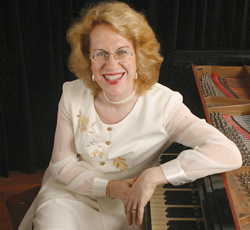 The October 1 concert by the Canton Symphony Orchestra was billed as “You Asked For It!” Last year, concertgoers were given a list of three works in three categories from which to choose for this season’s opening program. As Music Director Gerhardt Zimmermann reminded us at evening’s start, we chose well. I’m also happy to report that Zimmermann asked his colleague, Eric Benjamin, to compose a new work for the occasion.

In his program notes for the World Premiere of his Occasional Overture, Benjamin wrote that he was particularly inspired by Mozart’s Overture to The Marriage of Figaro, which he characterized as “…this little moto perpetuo that scurries, fizzes, explodes, dazzles, charms, and does not overstay.”

Those words are certainly a fitting description of the aural titillations that Benjamin realized with his own overture in decidedly grand fashion. The short work (I actually wished it could have stayed a bit longer) is a glittering reverie of orchestral colors and textures. With a dizzying array of spicy variations in melody, rhythms, and tempi, this sonic casserole is a delightful dismantling of the time-honored sonata form. Complex but seamless, it tickles and teases at every turn, imparting the wondrous sensation of soaring through an enchanted kingdom on a fairy tale world.

Interestingly, Benjamin’s adventuresome piece was an effective lead-in to what followed: Mozart’s Overture to Die Zauberflöte (“The Magic Flute”). Not surprisingly, the Orchestra navigated its energetic mix of comical and dramatic developments with sparkling fluidity.

The centerpiece of the evening featured guest pianist Sara Davis Buechner in a soul-stirring performance of the notoriously challenging (for orchestra and soloist) Rhapsody on a Theme of Paganini, by Sergei Rachmaninoff. If it can be said that Rachmaninoff is a language, then Buechner speaks it with riveting authority and remarkable tonal warmth.

At times her distinctively animated playing style exhibited all the lilting finesse of a ballet dancer, at others the ferocity of an impassioned orator. Time seemed to stand still during her delivery of Variation Seven, the Dies Irae, wherein her thunderous playing exuded not so much overwhelming morbidity, but rather a delectable solemnity. Then, at the breathtaking emergence of the iconic Eighteenth Variation, we in the audience could literally read the nuanced dialogue between soloist and ensemble in Buechner’s swaying posture, the seeming weightlessness of her facile hands, and the radiant look of aching ecstasy on her face. Like her, we were spellbound. And soon, we were even more caught up in the electrifying thrust of the final section. Through it all, Buechner’s marvelous virtuosity was never a matter of gratuitous flashiness, but always purposeful and emotionally gripping.

After our exuberant standing ovation, Buechner returned to the stage and dedicated her encore to Gerhardt Zimmermann. She poured herself into a deeply poignant rendition of Gershwin’s The Man I Love. She spoke for all of us.

Speaking of that man, there was nothing forced or frenetic about his deportment as he conducted the evening’s final selection, Dvořák’s Symphony No. 9 (“From the New World”). Not that there ever is. Yet with only the subtlest of hand movements, or a slight tilt of his head, he clearly elicited astonishing articulations from this highly gifted ensemble — the fierceness of percussion and brass, the ravishing winds, the palpable warmth and depth of the strings. In this altogether splendid reading of Dvořák’s richly colored, sweeping vision, the Largo movement was especially engaging, driven by that noble melody on English horn (later to become the well-known spiritual, Going Home), and here played with heartrending clarity by Cynthia Warren.

Under Zimmermann’s astute direction, Dvořák was a perfect choice for exhibiting the CSO’s uncanny ability to seamlessly balance penetrating grace with unmitigated muscularity, gentle lyricism with compelling power. Going home indeed, who could ask for more?

Reprinted with permission from ARTWACH: Commentaries and critiques on the visual and performing arts in the greater Canton, Ohio Area.

END_OF_DOCUMENT_TOKEN_TO_BE_REPLACED

A new CD by Christa Rakich, who is currently Visiting Professor of Organ at the Oberlin Conservatory, gives a nod in two directions. As its title announces, it’s an homage to her former teacher and colleague, the late Yuko Hayashi, longtime professor at the New England Conservatory and curator of Boston’s Old West Church Organ Series. It’s also the first recording to be made of Richards, Fowkes & Co.’s Opus 16 instrument, built in 2008 for Goodson Chapel of the Duke Divinity School in Durham, North Carolina. END_OF_DOCUMENT_TOKEN_TO_BE_REPLACED

END_OF_DOCUMENT_TOKEN_TO_BE_REPLACED

Hailed by the New York Times as “The Best Classical Music Ensemble of 2018,” Wet Ink Ensemble has lived up to this acclaim once again with their recent release Glossolalia/Lines on Black. The album takes its name from the two extended works by Wet Ink members Alex Mincek (saxophone) and Sam Pluta (electronics). The remainder of the septet includes Eric Wubbels (piano), Erin Lesser (flutes), Ian Antonio (percussion), Josh Modney (violin), and Kate Soper (voice). END_OF_DOCUMENT_TOKEN_TO_BE_REPLACED

Croatian-born pianist Martina Filjak, now living in Berlin, has released her latest album, Light and Darkness, featuring music by Franz Liszt — plus an epilogue by Arvo Pärt. The disc confirms once again all the special technical and interpretive qualities that won her the gold medal at the Cleveland International Piano Competition in 2009. END_OF_DOCUMENT_TOKEN_TO_BE_REPLACED