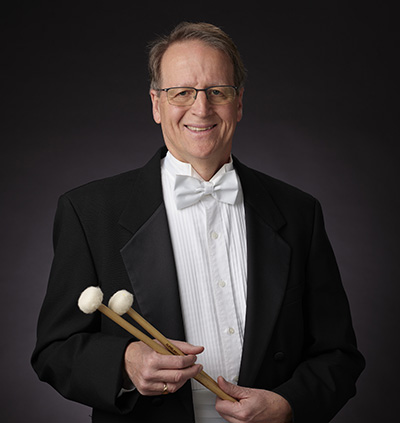 Timpani concertos are few and far between. Even the most knowledgeable would be hard pressed to name the composers of one or two. How remarkable is it that Cleveland Orchestra principal Paul Yancich has two that were written for him with a third on the way, all by the same composer, James Oliverio.

“My relationship with Paul goes back to when we were students at the Cleveland Institute of Music in the’70s and he asked me to write a piece for his senior recital,” Oliverio said said during a telephone conversation from his home in Florida where he serves as Executive Director of the Digital Worlds Institute at the University of Florida. “That was my first major work for the instrument. And since that time we’ve stayed in touch.”

On Thursday, January 5 at 7:30 pm at Severance Music Center, Yancich will give the World Premiere of Oliverio’s Legacy Ascendant with The Cleveland Orchestra under the direction of Alan Gilbert. The concert also includes Haydn’s Symphony No. 90, and Nielsen’s Symphony No. 3 (“Sinfonia espansiva”) with soprano Liv Redpath and baritone Justin Austin. The program will be repeated on Saturday at 8:00 pm. Tickets are available online.

Oliverio’s Timpani Concerto #1 (The Olympian) was premiered by Yancich and The Cleveland Orchestra under the direction of Christoph von Dohnányi in May of 1990.  His second, DYNASTY Double Timpani Concerto, received its premiere performances by both the Atlanta Symphony and The Cleveland Orchestra during the 2011 concert season with Paul and his brother Mark (principal timpani of the Atlanta Symphony) as soloists. 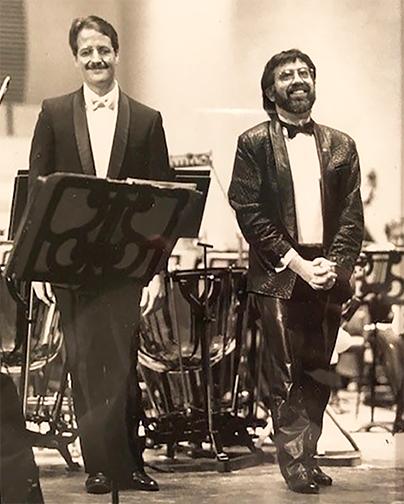 Oliverio said that when people think of timpani they think of an instrument at the back of the orchestra that is used to  reinforce crescendos and to add rhythmic punctuation and excitement. “But one of the things I discovered early on working with Paul is that the drums can be melodic when the writing allows the player the time to change the pitches on the drum with their feet while they are playing. The challenge is to write the music in a way that allows the drums to change pitches while the music continues.”

How many drums does the concerto call for? “In this I call for five drums, and the player is free to add a sixth but I’m not sure how Paul has decided to do it. But each drum is given a defined range of pitches so that they are complementary to each other. The top pitch is middle C on a piano and the bottom is two octaves lower.”

The composer added that his hope was to create a work that highlights the beautiful tone of the drums themselves. And to write melodic material that can be shared between the timpani and the orchestra (strings and harp) in a way that “utilizes what the players have spent their careers learning to achieve — a beauty of tone and timbre, and the ability to play long melodic lines with dynamic nuance and sensitivity.”

Oliverio, himself a Cleveland native, said that Legacy Ascendant is twenty-minute work in three movements, “Then,” “Halcyon,” and “Once Again,” and is influenced by a number of American musical idioms ranging from 20th century concert repertoire to jazz and popular genres. And as in his other timpani concerti this one also prominently features the harp.

“Keep in mind that both instruments change pitches with pedals. I also believe the tone color between them offers something unique and compelling. I’ve also been fortunate to have gotten to work with Trina (Struble), who has reviewed the part and has been very helpful as we have gone through this process. One of the best ways for a composer to ensure the idiomatic nature of their music is to work directly with the players rather than just handing them a part and expecting — or hoping — that they can play it.” 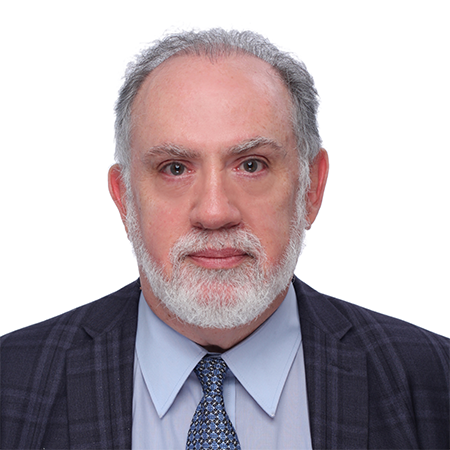 Now that he has composed three timpani concertos, has Oliverio become more comfortable writing for the instrument? “I like to think that the initial time that I spent with Paul getting to know the timpani as a physical instrument helped.  I was with him in the practice rooms at CIM and he showed me how the pedals work, and I remember asking lots of questions. So I familiarized myself with the mechanics of the instrument itself and therefore I’ve always felt comfortable. And I believe the music I write for it is idiomatic in the same way that Chopin wrote idiomatically for the piano.  Because Chopin understood what the piano could do, he was able to create a body of work that expanded the instrument’s virtuosity. And my goal has been to do the same with the timpani.”

When not composing timpani concertos, Oliverio enjoys a successful career as a film and television  composer. He’s won five Emmy Awards for his soundtracks.

How did he find his way to film music? “My father was an electrical engineer and my mother was a pianist, and as a child I was always looking at the circuit diagrams my father would be drawing and the sheet music in my mothers sunroom — both had symbols that were interesting to me. As I grew up, my interest ranged from technology to art forms like cinema, which was the emergent artform of the 20th century. So I feel blessed that I’ve been able to combine my love for orchestral and original music with my love for storytelling, technology, and cinema.”

Oliverio is looking forward to this week’s premiere performances of his new concerto. He’s also excited to have Alan Gilbert conducting. “I’m always happy to get back to Cleveland. As a living composer, it’s exciting to have my work performed by one of the world’s preeminent orchestras. And I’m honored to be able to work with Paul once again. To me it’s the culmination of a lifelong collaboration with him and that is very meaningful to me.”

END_OF_DOCUMENT_TOKEN_TO_BE_REPLACED

The strings-only work by Berg has made relatively frequent appearances on the Orchestra’s programs. In 2021, the musicians recorded it for the In Focus series, and it appeared again on last year’s European tour. Friday’s rendition maintained the group’s characteristic light and effortless playing, each section blending as much as possible to echo the work’s original form as a string quartet. At fifteen minutes total, the piece is quite short, but the dense encoded musical meanings require some extra-attentive listening. Splitting up the three movements ensured that each one could be appreciated on its own. END_OF_DOCUMENT_TOKEN_TO_BE_REPLACED