Even more impressive than the technical agility were the moments of calm. These included not just the middle Largo movement, but also an extended archlute solo before the piece even began. Brian Kay set the scene perfectly with his mournful playing, fittingly with flickering candlelight behind him.

The second soloist, Amanda Forsythe, also took on Vivaldi with “Siam navi all’onde algenti” from L’Olimpiade. With its attention-grabbing vocal acrobatics, this piece made quite the introduction for the soprano. Each of her vowels was perfectly shaped, no matter how fast they flew by. During particularly loud orchestral moments, sometimes Forsythe’s voice didn’t rise above the texture, but her high register always echoed clear as crystal. 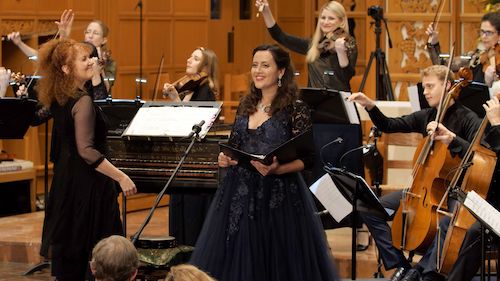 She also upped the drama with her acting chops. In Carl Heinrich Graun’s “Tra le Procelle assorto” from Cleopatra e Cesare, she cast mischievous glances around the audience, as if holding onto a secret she couldn’t wait to share. And in Handel’s “Piangerò la sorte mia” from Giulio Cesare, she imbued the recitative with shock and despair as Cleopatra bemoans her fate, believing her love Cesare to be dead. She also utilized aggressive dynamic changes during the aria, as Cleopatra furiously swears to return as a vengeful ghost.

Throughout the concert, the orchestra of strings, traverso, and plucked instruments consistently impressed, while Jeannette Sorrell led enthusiastically from the harpsichord. Furious bowing from the cellos and basses in Vivaldi’s Sinfonia in g, RV 157 evoked the building of thunder, while the traverso section created a silky smooth sound in Jean-Baptiste Lully’s “Passacaille” from Persée.

“Who can resist the fun of letting loose and ‘shredding’ on stage?” Choo wrote in the program notes. Given the frequent smiles that were exchanged between the performers, clearly none of them could. The most fun moments of the night were easily André Grétry’s “Marche égyptienne” from Caravan de Caire — with the traditional slinky chromaticism to whisk the listener away to a foreign land — and the Sailors’ Scene from Marin Marais’ Alcione. Forsythe rejoined the ensemble during the Marais for the “Air d’une Matelotte,” which was accompanied by a vivacious march and dance tunes that brought the concert to a close.

“I’m sorry that we have so much power over the weather,” Sorrell had remarked cheekily at the start of the program. Indeed, the performance was seemingly powerful enough that audience members walked into the night to find the storm had passed, leaving only a memory behind.

END_OF_DOCUMENT_TOKEN_TO_BE_REPLACED

The strings-only work by Berg has made relatively frequent appearances on the Orchestra’s programs. In 2021, the musicians recorded it for the In Focus series, and it appeared again on last year’s European tour. Friday’s rendition maintained the group’s characteristic light and effortless playing, each section blending as much as possible to echo the work’s original form as a string quartet. At fifteen minutes total, the piece is quite short, but the dense encoded musical meanings require some extra-attentive listening. Splitting up the three movements ensured that each one could be appreciated on its own. END_OF_DOCUMENT_TOKEN_TO_BE_REPLACED