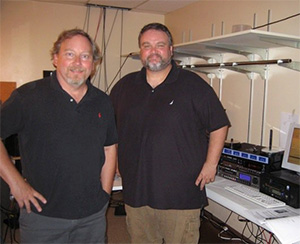 Long before the pianists arrive and each session begins, a whole group of people arrive to begin work backstage at Gartner Auditorium — making sure that microphones and cameras are properly placed and focused, that the audio and video feeds are working, that pianos are tuned, that radio broadcasts are announced, and that ushers are ready to take tickets, seat the audience, and deal with latecomers.

When I arrived in the lobby one hour prior to the 7:00 start time for the chamber music segment of the finals on Tuesday, the ushers were busy preparing to receive the audience, and volunteers were stocking the competition gift shop with program books, CDs and other CIPC items.

When audio engineer Alan Bise meets me and takes me backstage, the piano technician is busy tuning the Hamburg Steinway that both Georgy Tchaidze and Nikita Mndoyants had chosen for their performances with the Escher String Quartet. Bise noted that all the contestants have two Steinway models to choose from — the Hamburg and the New York. Interestingly, for this competition approximately 75% of competitors chose the Hamburg (recognizable by the single rib that runs under the piano lid).

In a small room, audio engineer Bruce Egre is preparing to record the evening’s sessions and produce CDs to be available for purchase by attendees within ten minutes of the end of each performance. During the run of competition, excluding the performances with The Cleveland Orchestra, 72 individual performances will have been recorded. Egre explained that the advance of technology has made things easier. Now, instead of making physical copies for all of the contestants and for archive purposes, sound files are stored in “The Cloud.”

Egre and Bise (pictured above) have been operating “Command Central” during the Competitions since 1999. Audio is recorded, mixed, and simultaneously sent to WCLV and to video producer Mark Dumm for the competition’s webcast. Bise noted that as of Monday night, there have been 14,751 unique views of the video stream on the CIPC website. “That represents 50 countries on 6 continents. But we’re still missing Antarctica.”

In an even smaller room next to command central, Bise briefs John Simna, WCLV 104.9 FM’s announcer for the evening, about how he will send signals to him throughout the evening (a series of hand gestures over a video monitor). 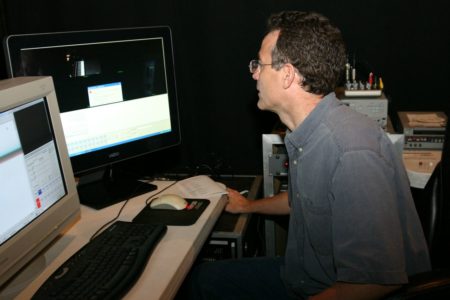 The addition of the chamber music round means that microphones need to be relocated and video cameras refocused to capture five musicians in a single frame. Although this didn’t cause any significant problems on the audio side, there were added complications on the video end on things. Mark Dumm explained. “Unlike a solo pianist where I only need to shoot from a few angles, with five people playing different lines I have to mark the musical scores of both of tonight’s pieces with video cues. So, for example, we’ll be focusing on the violist if he’s playing an important passage.” He too is doing live editing with the help of software that operates robo cameras.

While this may sound complicated, Bise said that over time he and Egre have developed a system that assures that everything runs smoothly. A big part of that system is good advance planning and checking everything off the list prior to each session.

Speaking of which, as I leave to take my seat in Gartner Auditorium, I run into WCLV station manager Jenny Northern. She’s delivering a CD of “just the right music” for Bruce Egre to play during the on-air break on Saturday evening while the jury deliberate their final decisions. No detail, however small, goes unnoticed.

END_OF_DOCUMENT_TOKEN_TO_BE_REPLACED

Franz Welser-Möst led the final bows on Saturday night at Severance, like the star of any show should. The Cleveland Orchestra’s music director is in his element presiding over the ensemble’s annual opera production, which this season packs the drama. Verdi’s Otello — in a concert staging that opened May 21 and runs for two more performances (May 26 and 29) — demands big voices, instrumental forces to match, and a conductor who can give it all shape and direction. END_OF_DOCUMENT_TOKEN_TO_BE_REPLACED

The cimbalom was the feature of the show, an instrument capable of taking on many personas. Its performer, Chester Englander, has shaped his career around the instrument, and has inspired composers to write more repertoire for it, some of which was presented on the program. END_OF_DOCUMENT_TOKEN_TO_BE_REPLACED