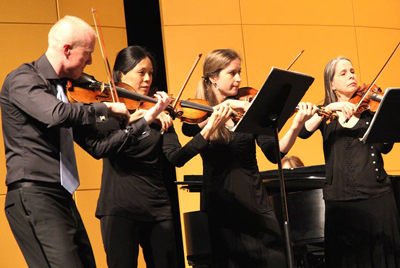 On Saturday evening February 18 at the Breen Center, the Blue Water Chamber Orchestra utilized differing combinations of eighteen musicians in a performance of three intimate works by Copland, Britten, and Wagner.

All of the works were led by concertmaster Ken Johnston. It was a daunting task, but his innate musicianship, command of the music, and attention to style brought forth fine performances.

The highlight of the evening was BWCO’s exquisite interpretation of Wagner’s Siegfried Idyll, one of the loveliest works in the small orchestra repertoire. Unlike his more grandiose works, the Idyll is an intimate piece for flute, oboe, two clarinets, bassoon, two horns, trumpet, and strings.  Wagner wrote it as a birthday present for his wife, Cosima, and rehearsed it in secret to be performed on the staircase of their house at Tribschen, Switzerland, on Christmas Day of 1870.  Johnston chose a moderately slow tempo that accentuated the suppleness and richness of Wagner’s dramatic style, creating a mood of gentle repose and tranquility infused with rapturous and soaring moments of drama.

Benjamin Britten wrote his Sinfonietta, Opus 1, when he was a seventeen-year-old student at the Royal College of Music. It makes use of all the combinations ten solo instruments can afford, and provides early evidence of Britten’s incredibly descriptive musical mind. The second movement Variations are often scored so that one instrument’s line runs into and over the next, culminating in a lustrous duet for two violins. In the Tarantella, the music gains impressive momentum with some brief but poignant asides. BlueWater played admirably, but the metric and rhythmic intricacies of the work made for some rather tentative entrances.

The original, thirteen-player version of Aaron Copland’s Appalachian Spring brought a joyous conclusion to the evening. Copland achieves remarkable effects from the small ensemble of strings, woodwinds, and piano. Throughout the work, he brilliantly weaves melodies that evoke simplicity and the “earnest but good-natured piety” of Shaker culture. An emotional highpoint of the score is the traditional Shaker song, “Simple Gifts.” The ballet’s multiple musical styles, catchy rhythms, glorious melodies, and poignant emotional highs and lows, made you wish that it could have continued longer into the night.  The BWCO musicians, some of the best in Northeast Ohio, were outstanding and traversed the perils of performing without conductor with attentiveness and professional respect.

END_OF_DOCUMENT_TOKEN_TO_BE_REPLACED

Concerts cancelled in 2020 may have put a brief gap in Ling’s record with the Orchestra (a program every season since 1984-1985), but the ensemble’s former resident conductor more than made up for it Sunday with a performance both commanding and personal. END_OF_DOCUMENT_TOKEN_TO_BE_REPLACED