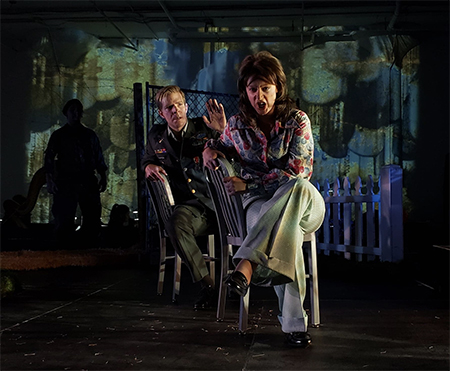 After serving their country, many veterans are faced with multiple challenges as they re-adjust to civilian life. At the top of that list is reconnecting with and re-establishing a role in the family. These issues were brought to the forefront on Friday, October 19 when Baldwin Wallace Opera presented the Midwest premiere of Tom Cipullo’s two-act, 77-minute chamber opera Glory Denied at Red Space in Cleveland.

Based on the book by Tom Philpott, the opera tells the true story of Jim Thompson, the longest-held prisoner of war in U.S. military history, as he tries to re-assimilate into American life after spending nine years behind enemy lines in Vietnam.

Instead of creating a narrative to tell Thompson’s life story, Cipullo creatively strings together a series of remembrances delivered by four characters — younger and older versions of Thompson and his wife Alyce. 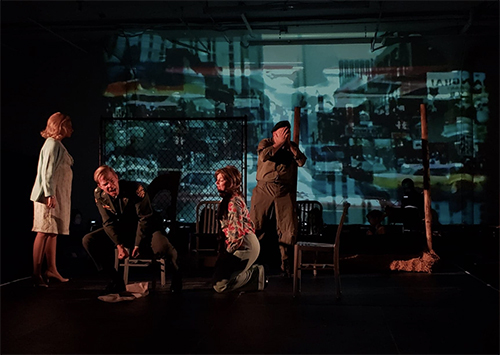 During Act I, In Captivity, the audience is brought up to speed about all that has happened during the years Thompson spent behind enemy lines, including attempted escapes, torture and four years in solitary confinement. We learn that Alyce, who has received word that her husband’s plane has been shot down, tells her children that their father has died and begins a relationship with another man. In Act II, Welcome Home, Thompson discovers that he has returned to a wife, a family and a country that he no longer recognizes. Everything in the world has moved on without him.

While the first half of the performance was uneven — the thick vocal and orchestral writing often rendered the words unintelligible in the expansive space (there were no super titles) — the second half, which provided the excellent cast with more solo opportunities, was truly gripping. 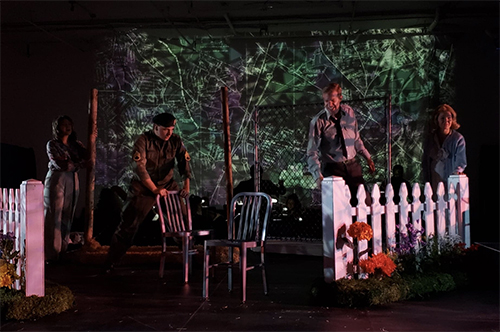 Ciara Newman’s pensive delivery of “After You hear me out” was a highlight. Strong and unapologetic, she turns Alyce into the opera’s heroine as she tells Jim, “I don’t give a shit if you forgive me or not — I had to learn to fight my battles.”

Ethan Burck and Kailyn Martino showed their acting skills and vocal prowess as the Young Jim and Young Alyce. Martino’s “My Darling Jim” was superb.

Like Cipullo’s libretto, his musical score is continuously moving as his engaging writing underpins the opera’s fractured narrative. Placed behind the small stage, conductor Brian Onderdonk allowed the music to ebb and flow beautifully while the nine-piece chamber orchestra comprised of local musicians were splendid throughout.

Director Dugg McDonough made the most out of the small stage — the cast moved in out and of the parallel universes of then and now with ease. Barbed wire and chain link fences depicted enemy lines, and white picket fences represented the loving home.

As is often the case when a book is turned into a piece of theater, Glory Denied only tells a small part of the family tragedy of Jim and Alyce Thompson. Still, Cipullo’s opera is a cold reminder of the horrors that war inflicts on families, and that the world is not always what we want it to be.

END_OF_DOCUMENT_TOKEN_TO_BE_REPLACED

Rodgers & Hammerstein’s Cinderella was originally produced for television in 1957 — seven years after the animated Disney film was released — and starred Julie Andrews. According to the Rodgers & Hammerstein website, it was viewed by over 100 million people. END_OF_DOCUMENT_TOKEN_TO_BE_REPLACED

The story line has its origin in an 1855 play and an 1842 farce that Thornton Wilder mined for his 1938 play The Merchant of Yonkers. When that turned out to be a flop, in 1954 Wilder made the crucial decision to re-center the show around the character of the legendary marriage broker Dolly Gallagher Levi and renamed it The Matchmaker. END_OF_DOCUMENT_TOKEN_TO_BE_REPLACED

The Dodero Center for the Performing Arts at the Gilmore Academy in Gates Mills is one feature of an impressive campus. The auditorium is shallow, the stage is deep, and the ensemble played without a shell. Throughout the program, the sound, especially in instruments’ lower registers, tended to disappear. END_OF_DOCUMENT_TOKEN_TO_BE_REPLACED