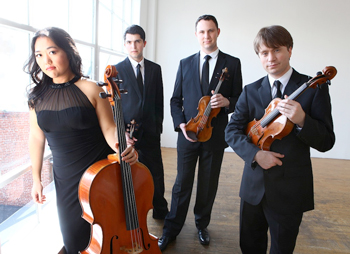 Since its formation in 2010 at the Colburn School in Los Angeles, the Calidore String Quartet has been on a fast-track to success in the competitive world of professional chamber music. In 2016 alone the Quartet won England’s Borletti-Buitoni Trust Fellowship, becoming the first North American ensemble to receive the £20,000 award in the foundation’s history. During May they made their Carnegie Hall debut, and also won the $100,000 grand prize at the inaugural M-Prize Chamber Music Competition.

On Saturday, June 25 at Our Lady Chapel on the campus of Gilmour Academy, the Calidore made their Cleveland area debut as part of ENCORE Chamber Music’s “Virtuoso Series.” Their program, titled “Forbidden Voices: Censorship and Propaganda of WWII,” included music by Sergei Prokofiev, Dmitri Shostakovich, and Felix Mendelssohn. From start to finish, violinists Jeffrey Myers and Ryan Meehan, violist Jeremy Berry, and cellist Estelle Choi proved themselves worthy of every accolade that has been bestowed upon them.

Prokofiev’s Quartet No. 2 in F, which opened the program, was commissioned by the Soviet government at the time when the composer and other well-known artists had been evacuated from Moscow to Nalchik during WWII. The Calidore took a stately approach to the opening “Allegro sostenuto,” that allowed the inner voices to project clearly. Their interpretation of the “Adagio” was elegant. They brought out the manic side of the concluding “Allegro,” and were in full command of the movement’s many tempo and mood changes.

Also written during WWII, Shostakovich’s Quartet No. 2 in A is one of his more uplifting quartets. The Calidore performed brilliantly, playing with a full, darkly-hued tone, long musical lines, and tight interlocking rhythms. First violinist Jeffrey Myers’ performance of the recitative that opens the second movement was mesmerizing. Estelle Choi’s cello lines in the “Valse: Allegro” were downright spooky. Violist Jeremy Berry dramatically introduced the concluding “Theme and Variations: Adagio.” Combined with the spot-on playing by second violinist Ryan Meehan, the young ensemble “owned” Shostakovich’s quartet.

If anyone in the audience wondered how Mendelssohn’s Quartet No. 4 in e fit into the program’s theme, it’s because his music was banned by the Nazis during WWII due to Mendelssohn’s Jewish descent. Listening to the Calidore’s joyful playing of Mendelssohn’s sunny music, it’s hard to believe anyone could be so cold-hearted as to go out of their way to suppress it. The Quartet brought an exquisite sense of ensemble to the opening “Allegro.” A spritely tempo and crisp articulations defined the “Scherzo,” while their “Andante” was a gorgeous love song. The Quartet’s first-rate playing of the ending “Presto” simply made you smile.

The appreciative audience was not going to let the evening end, and the long ovation prompted an encore — the second movement of Mendelssohn’s String Quartet, Op. 12.

END_OF_DOCUMENT_TOKEN_TO_BE_REPLACED

What was that strange din coming over the live feed from Ludwig Recital Hall on Friday evening, July 23, as the Miami String Quartet filed onstage to play the third faculty recital of the Kent Blossom Music Festival? Accustomed as we were during the pandemic ban on live audiences to hearing the sound of no hands clapping, it was both startling and thrilling to witness a large crowd putting their hands together to welcome one of the Festival’s perennial favorites back for an in-person performance. END_OF_DOCUMENT_TOKEN_TO_BE_REPLACED

Practical reasons aside, there aren’t many ensembles who can put together an all-Mozart evening as elegantly as The Cleveland Orchestra. END_OF_DOCUMENT_TOKEN_TO_BE_REPLACED