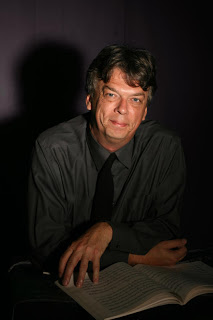 In the beginning, I thought that the Canton Symphony’s December 3 MasterWorks program, called “Gifts of Fate,” was a peculiar, even arbitrary pairing of very disparate works: The Secret Gift, a Christmas-themed symphonic poem of sorts, written in 2013 by American composer Eric Benjamin, and Ludwig van Beethoven’s iconic 1807 masterpiece, Symphony No. 5. But by evening’s end, I heard the connective light.

Eric Benjamin (left), Musical Director of the Tuscarawas Philharmonic and the Alliance Symphony, named his work after a 2010 book written by Ted Gup, which chronicled the generosity of Gup’s grandfather, Sam Stone, a clothing store owner in Depression-era Canton.  In December, 1933, Mr. Stone was so moved by a church performance of Dickens’ A Christmas Carol that he placed an ad in The Canton Repository asking for those in dire need to send him a letter describing their circumstances. Ultimately Stone, under the pseudonym “B. Virdot,” sent gifts of $5 to 150 destitute families. That’s perhaps a laughable pittance by today’s standards. But during the Great Depression, it was a godsend

In his program notes, Benjamin wrote of some musical styles he sourced, “…Rumanian folk music for the account of Sam’s childhood there, early jazz for his arrival in and beginnings of his career in the U.S., something vaguely like cantorial music to underline his orthodox Jewish roots and the Talmudic teaching on social justice…” The spiritual dynamic of the work was further augmented by the dramatic sonority of the Canton Symphony Chorus.

Vintage photographs of 1930s Canton people, places, and letters sent to Sam Stone were projected on the large screen above the orchestra. Throughout the performance, Benjamin himself was an especially warm and empathetic narrator. The work was also peppered with narrations drawn from the citizens’ letters to B. Virdot, beautifully spoken by a cast of 11 gifted actors directed by Craig Joseph.

While Benjamin’s music is often heartrending in its sentimentality, it’s never mawkish. Beyond a deeply emotive remembrance of Sam Stone’s philanthropic heart and the lives it graced, the potent lyricism of the score transcends its specific historical narrative to resonate as a clarion call for compassion and hope in any era or circumstance. There is indeed an aura of timelessness about this work.

And who could possibly doubt the timelessness of Beethoven’s Fifth Symphony, conducted here by Gerhardt Zimmermann? He reminded the audience to reflect on the enormity of Beethoven’s desperate efforts to battle through his increasing deafness, once declaring in a letter that he was determined to “…seize Fate by the throat; it shall not bend or crush me completely.”

Hence the unforgettable opening of the work (“Thus Fate knocks at the door,” Beethoven was reported to have said) proceeds through a vast terrain of emotions in a heroic journey to arrive at the equally unforgettable and triumphant coda of the finale. Zimmermann’s reading of Beethoven was consistently brisk, translated by the ensemble into a palpable urgency, yet tempered with thrilling alacrity. Appropriately enough, the marvelous aural clarity and sheer power of the CSO throughout this phenomenal work suggested nothing so much as life’s most compelling forces.

Beethoven’s developments from C minor to C major in his Fifth Symphony could be rightly regarded as a metaphor for darkness giving way to light. In that sense, his music is a gift for the ages, an exhilarating symbol of the human spirit. Benjamin’s work proclaims a similar bent-but-not-broken message. Hearing them together on one program was an experience at once sobering and joyous.

END_OF_DOCUMENT_TOKEN_TO_BE_REPLACED

Rodgers & Hammerstein’s Cinderella was originally produced for television in 1957 — seven years after the animated Disney film was released — and starred Julie Andrews. According to the Rodgers & Hammerstein website, it was viewed by over 100 million people. END_OF_DOCUMENT_TOKEN_TO_BE_REPLACED

The story line has its origin in an 1855 play and an 1842 farce that Thornton Wilder mined for his 1938 play The Merchant of Yonkers. When that turned out to be a flop, in 1954 Wilder made the crucial decision to re-center the show around the character of the legendary marriage broker Dolly Gallagher Levi and renamed it The Matchmaker. END_OF_DOCUMENT_TOKEN_TO_BE_REPLACED

The Dodero Center for the Performing Arts at the Gilmore Academy in Gates Mills is one feature of an impressive campus. The auditorium is shallow, the stage is deep, and the ensemble played without a shell. Throughout the program, the sound, especially in instruments’ lower registers, tended to disappear. END_OF_DOCUMENT_TOKEN_TO_BE_REPLACED