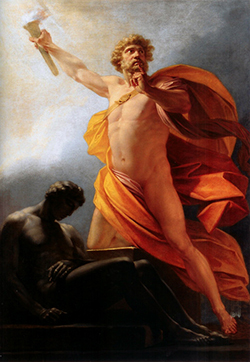 With Beethoven as the primary focal point, the three works on the January 26 Canton Symphony Orchestra MasterWorks program made for a beautiful and bittersweet journey through interconnected musical and dramatic ideas. The final destination was an altogether magnificent event — Beethoven’s ground-breaking third symphony, Eroica.

This intriguing journey began with Beethoven’s finale to Die Geschöpfe Des Prometheus (The Creatures Of Prometheus), a two-act ballet choreographed by Salvatore Viganò, and first performed on March 28, 1801 at the Vienna Hofburg Theater. Though a few critics of the day complained that Beethoven’s music was so intellectually demanding that it overwhelmed the dancing, the public reception was more forgiving, and the ballet enjoyed reasonable success with 28 performances over the next two seasons.

Viganò called the work a “heroic allegorical” drama which presented the mythological figure of Prometheus as a noble figure, driven to eradicate the ignorance of human beings. With the help of Apollo and the Muses, he leads two statues into experiencing human passions, gifting them with philosophy, knowledge of the arts, and morals.

The form of Beethoven’s finale for the ballet was drawn from the Anglaise, a popular social dance at the time. The dominant musical idea resonates with prophetic significance. In it we hear a bass line and melodic theme that was clearly a lasting favorite for Beethoven. He would use it again in his set of 12 Contredances and in his Opus 35 piano variations (Eroica Variations), both written in 1802, and to a far greater extent in the finale of his third symphony, written in 1803-1804. Here, the ensemble articulated all of the breezy, bright energy of the ballet finale with scintillating clarity.

After this brief but cheerful moment of light, we were transported to considerably more challenging, darker realms. In introducing the next piece, Richard Strauss’s Metamorphosen, composed in 1945, Music Director Gerhardt Zimmermann offered astute and sensitive observations about the resonant themes that linked all three works on the program. In particular, he characterized the mournful solemnity of the Strauss work — strikingly similar to the musical ideas in Beethoven’s iconic funeral march in the second movement of Eroica — as an expression of unmitigated hopelessness. In the final measures of the work, Strauss directly quoted the Beethoven theme, and made a notation on the score, “In Memoriam!” While those words can certainly be regarded as grateful acknowledgement of Beethoven’s influence, it’s also fair to see them as implacable grief over the wartime collapse of an entire culture. When he heard that the Weimar and Munich opera houses had been destroyed, Strauss wrote, “…it was the greatest catastrophe of my life; there is no possible consolation, and, at my age, no hope.”

Have you ever stood on an ocean shore long enough to be hypnotized by the waves coming in? Were you awed by the power of their constant slow swelling in the distance, their majestic cresting, and the whooshing sound of their falling close to you, over and over again, for what seemed like an eternity? In some ways way, listening to the orchestra navigate this profoundly moving work was similarly mesmerizing.

The work is scored for 23 solo strings. On this occasion, all but the five cellists performed while standing — a haunting evocation of a funeral procession. Strauss’s music is an immersive masterpiece of intricate chromaticism and dense, complex textures, all intertwined and washing over us in seemingly relentless, alternating cycles of dramatic crescendos, countered with passages of contemplative quiet. The ensemble’s reading was intensely reverential and cohesive, and yet another riveting demonstration of the virtuosic prowess and enthralling sonority of the CSO strings.

That same remarkable depth of artistry was all the more multiplied and intensified throughout the entire orchestra in its radiant performance of Eroica. Now it felt as if all of this evening’s ideas, colors, and moods had congealed so completely that the orchestra under Zimmermann’s impassioned baton became a compelling embodiment of Beethoven himself, if such a thing were possible.

I’m speaking of Beethoven the man, finding hope and joy even in the tragedy of his encroaching deafness and political tumult of his day; of Beethoven the Promethean visionary, drawn to the idea of bringing enlightenment to humanity; of Beethoven the romantic revolutionary, who changed the face of symphonic music. That an orchestra could so beautifully impart such considerations, as this one did, is a heroic act in itself.

END_OF_DOCUMENT_TOKEN_TO_BE_REPLACED

Rodgers & Hammerstein’s Cinderella was originally produced for television in 1957 — seven years after the animated Disney film was released — and starred Julie Andrews. According to the Rodgers & Hammerstein website, it was viewed by over 100 million people. END_OF_DOCUMENT_TOKEN_TO_BE_REPLACED

The story line has its origin in an 1855 play and an 1842 farce that Thornton Wilder mined for his 1938 play The Merchant of Yonkers. When that turned out to be a flop, in 1954 Wilder made the crucial decision to re-center the show around the character of the legendary marriage broker Dolly Gallagher Levi and renamed it The Matchmaker. END_OF_DOCUMENT_TOKEN_TO_BE_REPLACED

The Dodero Center for the Performing Arts at the Gilmore Academy in Gates Mills is one feature of an impressive campus. The auditorium is shallow, the stage is deep, and the ensemble played without a shell. Throughout the program, the sound, especially in instruments’ lower registers, tended to disappear. END_OF_DOCUMENT_TOKEN_TO_BE_REPLACED