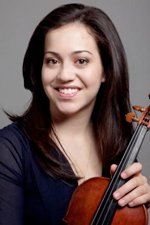 In his program comments celebrating the 80th season of the Canton Symphony Orchestra, Music Director Gerhardt Zimmermann wrote, “Why do I love conducting this wonderful orchestra?…The CSO is that rare gem of orchestras that conductors seek to make music with. Their playing is committed, heartfelt, powerful, and above all, exciting.” For the season-opening concert on October 14, that rare gem dazzled with exceptional brilliance, beginning with Samuel Barber’s Essay For Orchestra No. 2, composed in 1942. It’s a marvelous, single movement work of interwoven, contrasting themes and developments, and exemplary of Barber’s passionately lyrical aesthetic. Here the ensemble perfectly captured the work’s changing moods — like painting an expansive landscape of emotions in sumptuous orchestral colors with compelling precision and dramatic sonority. The briefly tranquil opening theme gave way to darker passages of churning drama and foreboding. Those in turn transitioned to more light-hearted, pastoral interludes, with melodic counterpoints that eventually morphed into the majestic and triumphal solemnity of the explosive conclusion, all clearly thrilling the audience.

Lauren Roth, a former CSO concertmaster and now concertmaster of the Tucson Symphony Orchestra, returned to Canton to perform Camille Saint-Saëns’ lavish Violin Concerto No. 3. What made this homecoming all the more exciting was that this was the first time had Roth performed the concerto with an orchestra, though you’d never guess it from her virtuosic playing, delivered with astonishing fluidity and authority.

Roth’s demeanor was mesmerizing, at once gently measured and aggressive, evident in both her impassioned facial expressions and stance. She was communing not only with the ensemble, but also with her instrument, making it sing in a marvelous range of tonalities, and at times seeming to demand its submission to the many technical demands of the music. Her playing was especially poignant during the second movement, wherein the graceful violin melody engaged in a delicate dance with the woodwinds. Throughout the work, she articulated Saint-Saëns’ lush cadenzas — ravishing in their fast arpeggios and scales, double stops, and flawless ascensions into incredibly high-pitched harmonics — with stunning bravura.

Respighi’s Fontane di Roma (Fountains of Rome), and Pini di Roma (Pines of Rome) comprised the second half of the evening. The orchestrally rich score for the latter work called for a massive orchestra. Consequently, for this concert, the CSO ensemble was 92 members strong — a substantially larger group than usual, providing an unprecedented aural depth to the proceedings.

While the performance of The Fountains of Rome was utterly enchanting, it was in the final movement of The Pines of Rome — “The Pines of the Appian Way” — where the orchestra became an unforgettably unified embodiment, delightful in its unabashed flamboyance, of the composer’s intent. Respighi described it as the “…unceasing rhythm of numberless footsteps. A vision of ancient glories appears to the poet’s fantasy: trumpets blare, and a consular army bursts forth in the brilliance of the newly-risen sun…”

A low, rumbling, relentless cadence, suggesting an army on the march, reverberated through the entire concert hall in ever-loudening layers, enough to rattle bones and make the heart race. We were engulfed in plangent waves of brassy martial trudging, augmented by the extra brass players standing in the side aisles. Maestro Zimmermann was particularly animated, turning this way and that, like a general rallying his troops. The final jubilant chord was a piercing blast, raising a collective shout of amazement from the audience. It was as if all of Roman history had just passed before us in a protracted sonic boom.