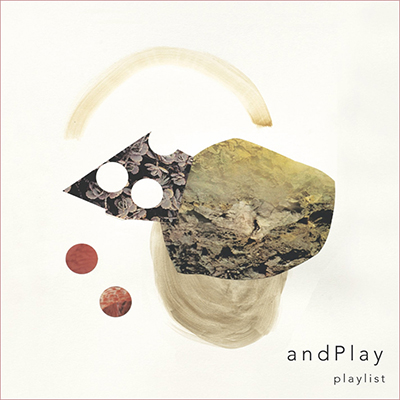 As Aristophanes told it (after ridding himself of a pernicious bout of hiccups), there was a time when there was a certain variety of humans. It was round, its back and sides forming a circle, with four hands and four feet, one head with two faces looking opposite directions and (perhaps most importantly) four ears.

Once upon a time, andPlay was two normally-constituted humans: Maya Bennardo and Hannah Levinson. They met at Oberlin Conservatory in 2007, where, as the story goes, they were each struck simultaneously by a vision for a future with eight coordinated limbs.

Behdazi’s Crescita Plastica opens the album on a highly virtuosic plane, abounding with dramatic and aggressive gestures. Inversions and mirroring make this movement unique, as both partners react to one another, rarely finding their way to a sense of unification. Even though both instruments rarely come together, there is a strong sense of interpretational unity. This is eminently clear, since it becomes difficult to distinguish the violin from the viola — truly like an eight-limbed human.

A compelling use of various textures and perpetual high energy, the piece resembles an eclectic ocean of sounds and high-definition surfaces, exploring extremes of dynamics, pitch, register, and sounding point, from a quiet haze and barely discernible pitch to ferocious grit, and everything in between.

David Bird’s Bezier plays with the physical components of the instruments, inspiring images of wood, sticks, hair, and metal. It is improvisatory and free-sounding, aiming to create a fresh way of looking at string instruments and sound generally. This requires an abandonment of preconceptions, and a nearly childlike marvel at the phenomenon of sound. The title and mathematical feeling that permeates the work are briefly explained in the liner notes:

The Bezier curve is a parametric curve used in computer graphics and related fields, including, in Bird’s case, music. Because the curve can be scaled indefinitely, Bird finds it useful for what he calls “expressive depictions of timbral transformation over time.”

Clara Iannotta’s Limun opens like an experimentation of friction on stringed instruments. This is the first of the tracks to introduce elements of meditation and contemplation. It opens the door to the world of harmonics and overtones in a magical and mysterious way. Both players create harmonic shades that seem extraterrestrial, shimmering in various shades of metallics. Midway through the piece an eerie sound begins to surround the two soloists, who blend and stand apart in a strangely ethereal manner. Iannotta uses multiple harmonicas to create a myriad of overtones.

Bird’s Apocrypha ends the album by taking the concept from Limun a step further, with electronics. Opening with a clashing, dissonant drone, the music expands into various extended techniques. Inspired by Stanislaw Lem’s 1961 sci-fi novel Solaris, Bird creates various electronic effects, telling a story of suspense that stretches both the ears and the imagination. Warning: listeners may experience strange tingling sensations both in mind and body, and particularly the ears. As Meaghan Burke wrote in her liner notes:

The album is itself a living breathing organism, a universe of sound and space, united by the boundless curiosity and unbridled passion of its musician-explorers

Playlist is available on Bandcamp, Amazon and Spotify.

The cimbalom was the feature of the show, an instrument capable of taking on many personas. Its performer, Chester Englander, has shaped his career around the instrument, and has inspired composers to write more repertoire for it, some of which was presented on the program. END_OF_DOCUMENT_TOKEN_TO_BE_REPLACED

You wouldn’t expect that acoustic from a glance at the nave, which is wide and long, but not especially lofty. But when I guest conducted a local amateur choir and professional orchestra in Beethoven’s Mass in C there a few years back, during the first rehearsal we released the final chord of the “Gloria” and listened in astonishment for the next several seconds. The sound continued to roll down the space like the big wave that surfers dream about. END_OF_DOCUMENT_TOKEN_TO_BE_REPLACED