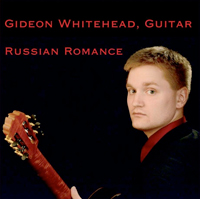 Classical guitarist and Cleveland Institute of Music alumnus Gideon Whitehead has produced his debut CD, Russian Romance, a project funded by a modest KickStarter campaign and apparently produced on a shoestring (the proposal included the purchase of recording equipment, another member of the Whitehead clan was the recording engineer and the album was recorded in a Michigan church). Though charmingly homegrown, Russian Romance sparkles with professionalism and introduces unusual repertoire that will be of interest both to guitarists and lovers of classical guitar music.

Whitehead wrote at the beginning of that project, “For me, it is much more than simply recording an album of music that I love to play — it is a means for me to introduce some really incredible music that has (as far as I can tell) been almost completely ignored by musicians outside of Russia. I know of only a few guitarists who are familiar with this repertoire and I know of absolutely no musicians outside of the guitar community who have ever heard of all but a couple of these composers.”

So right. Those composers include Andrei Sychra, Sergei Rudnev, Nikita Koshkin, Grigori Korchmar and S. Osipov, and they’re all names new to these ears. In an interview with this publication, Whitehead noted that the classical guitar tradition in Russia “dates back to the nineteenth century with guitarist, composer and teacher, Andrei Sychra (1773–1850) who is considered to be the grandfather of the Russian guitar.” Sychra is represented here by his Grand Fantasia.

A little online research revealed that Sergei Rudnev (The Old Lime Tree) is a contemporary guitarist and composer, born in Tula in 1955. Also a guitarist-composer, Nikita Koshkin (Usher Waltz) was born in Moscow in 1956. Grigori Korchmar, a well-known composer and pianist in St. Petersburg (White Nights Serenades), was born in 1947 in Baltiysk. “S. Osipov” (Russian Romance) is something of a mystery, though there’s an Osipov Russian State Folk Orchestra.

I mention these basic facts because the album comes with no liner notes. If those were available, they might also explain why the CD contains a suite by the German baroque lutenist, Sylvius Leopold Weiss, who seems never to have set foot in Russia. We know from Whitehead’s remarks at a recital last March that a Weiss student became lutenist at the Moscow court, where the Partita in g is preserved in a manuscript, but other listeners may wonder!

Weiss’s honorary Russian status gives him the opening slot on the album and Gideon Whitehead plays the introductory Andante and four dance movements that follow fluently, with clear articulation, and a good sense of the individual pace and character of the Courante, Paysane and Gigue. By way of contrast with the more elegant movements, he gives the Polonaise a distinctly rustic quality.

Rudnev’s The Old Lime Tree is a charming set of variations full of sentiment and heart-rending harmonies that Whitehead invests with copious rubato. In an animato variation, he brings out its interesting inner voices.

Edgar Allen Poe’s Fall of the House of Usher was the inspiration for Koshkin’s Usher Waltz, and both the composer and performer have a field day with its demonic gestures, ghostly harmonics and twangy pizzicatos.

Korchmar’s five night pieces, based on a Pushkin poem (Evening Romance — Waltz Echoes — Nocturne — Scherzo of Shades Infernal — Hymn to the Rising Sun) paint little vignettes of St. Petersburg during the summer when the sun never quite sets. Whitehead captures its range of styles, from jazzy to sentimental to virtuosic, keeps things chugging along at a fast clip in the Scherzo, and makes a climactic moment out of the richly voiced chords that reach up to greet the rising sun.

Russian Romance ends this attractive and unassuming album with a simple folk song that reveals Whitehead’s talent for communicating directly with the listener. In this and some other pieces, the guitarist might have given more prominence to the melodic line, which gets lost now and then in the underlying texture — something to think about for the next album.

The first such video, capturing the October 20 performance of Resilience at First Baptist Church in Shaker Heights, delivered handsomely on that promise. Erica Brenner’s sensitive videography and audio mixing preserved brilliant performances of music that illuminated two troubled periods in history: the plague of London in 1665, and the outbreaks of cholera and dysentery that dampened but failed to defeat the human spirit at the end of the American Civil War two centuries later. END_OF_DOCUMENT_TOKEN_TO_BE_REPLACED

The Diamond Brass Quintet opened Rocky River Chamber Music Society’s new season on Monday, October 12 with nobody in the pews at West Shore Unitarian Universalist Church. Like most performances these days, the concert was only attendable online. The players were widely-spaced on the stage, plexiglass shields were in place to cut down on aerosol transmissions, and the quintet took two intervals to go outdoors and let the air in the sanctuary refresh itself. (Rehearsals had been held outside as well.) END_OF_DOCUMENT_TOKEN_TO_BE_REPLACED

“Bewitched,” the first subscription concert of this season by Les Délices, can be summed up in one word: sensational. In her introductory remarks, director Debra Nagy talked about the “Embracing Change” theme of the season and completely rethinking the concert experience for streaming. The detailed planning was in evidence throughout the program. “Bewitched” was not just a concert; it was a carefully planned musical film, with elements of drama and music appreciation, all in support of the inspired program choices featuring Medea and Circe, two famous witches (or sorceresses, if you prefer) of classical antiquity. END_OF_DOCUMENT_TOKEN_TO_BE_REPLACED

END_OF_DOCUMENT_TOKEN_TO_BE_REPLACED

Though it had amassed a vast trove of audio over the decades, The Cleveland Orchestra has come late to the game in the video department. Even so, the organization wasn’t about to rush to produce the equivalent of home movies to keep its patrons engaged while live events were on hold. END_OF_DOCUMENT_TOKEN_TO_BE_REPLACED

END_OF_DOCUMENT_TOKEN_TO_BE_REPLACED

Although it wasn’t the original plan to go online last weekend for the final round of the James Stroud Classical Guitar Competition, moving to a digital format suited the event well. Young performers Aytahn Benavi, Patricia Hernandez, Ian Tubbs, and Eric Wang played in the intimate setting of their own homes, giving everyone who tuned in a front row seat. END_OF_DOCUMENT_TOKEN_TO_BE_REPLACED