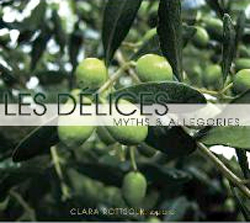 groups like William Christie’s Les Arts Florissants and Debra Nagy’s Les Délices, who have made it their primary business to interpret French baroque music for twenty-first century ears, that special, highly stylized repertory now comes to life on a regular basis. Cleveland-based Les Délices has today issued its second CD, Myths and Allegories, with music by Jean-Féry Rebel, Thomas-Louis Bourgeois Michel Pignolet de Montéclair and Elisabeth Jacquet de la Guerre based on tales from The Odyssey credited to the Greek epic singer, Homer (probably there were many of him). The album, featuring soprano Clara Rottsolk, with Debra Nagy, baroque oboe and recorder, Julie Andrijeski, violin, Emily Walhout, viola da gamba, and Michael Sponseller, harpsichord and organ, was recorded by Peter Nothnagle in Harkness Chapel at CWRU in March of this year.

Subjects drawn from classical antiquity were important to French baroque artists and musicians, and the story of Ulysses’s torturous return to Ithaca after the Trojan War was rich with possibilities. This recording begins and ends with movements from Rebel’s Ulysse (his only attempt at opera), and incorporates cantatas by Bourgeois and de la Guerre depicting the lure of the Sirens and Ulysses’s sea battle with Neptune in retaliation for the blinding of Polyphemus. In between, a “War Suite” for oboe by Montéclair symbolizes Ulysses’s military campaign, and a violin sonata by Rebel (“La Fidelle”) invokes the patience of Penelope while waiting for his return.

But one composer is missing from that list: Debra Nagy has composed an additional instrumental line (called deuxième dessus or contrepartie) for certain movements of the Bourgeois, de la Guerre and Rebel pieces to adapt them for Les Délices, something composers did routinely during the baroque period, and she has done that seamlessly.

All the individual performances on this disc are superb. Rottsolk’s clear, expressive voice (often warmed with vibrato) is always used to serve the text and she proclaims its emotional content masterfully. Nagy (who doesn’t use vibrato, but sometimes bends pitches for affective purposes) produces an agreeably dark tone even in martial movements and displays superb technique in complicated passages. Andrijeski plays with verve in the ensemble pieces and brings out all the subtle emotional shadings of the Rebel sonata. Walhout and Sponseller make a fine continuo team; Sponseller changes to chamber organ for several movements in the de la Guerre (and Nagy to recorder — a nice contrast), and always plays with stylish thought to the texts. Altogether, the five musicians pay close collective attention to rhythm — one of the most difficult aspects of French baroque style. The results are lively, fresh and continuously listenable over the course of more than an hour’s worth of music. There are plenty of opportunities for pictorial effects, and Les Délices makes the most of them.

Debra Nagy’s informative liner notes, full translations of vocal texts, extensive biographies of performers, descriptions of instruments (all modern versions of period models, by the way) and tuning details (A-392, 1/6th comma meantone) complete a well-thought out album which should find a home in the collections of French baroque fans and baroque music lovers alike.

Every so often, the first seconds of a concert bring neither anxiety over how the rest will go nor twitchy overstimulation, neither boredom nor ecstasy, but a satisfying assurance. Some performances click right away, the musicians’ technique unimpeachable, their artistry and expression powerful, their manner warm but professional. Such concerts hold attention in a special way — the chances of a misstep negligible enough that listening never involves comparison to an abstract standard. In the Phaeton Trio’s recent tour de force in Rocky River, the initial gestures of the performance set a high standard that held throughout. END_OF_DOCUMENT_TOKEN_TO_BE_REPLACED

Musicians love a good metaphor: take, for instance, that of summiting a mountain. When a violinist speaks this way after playing all of Bach’s partitas, or a soprano recalls preparations for a Wagner opera, the image of the artist mounting some hostile peak offers implications of persistence, struggle, and of course triumph. Pianists might describe Beethoven’s sonatas this way. But how many have actually played at the top of a mountain? Archival video confirms that French pianist Pierre Réach literalized this image of the soloist at the summit over twenty years ago. A recent concert in Cleveland confirmed that the figurative Everest of Beethoven’s piano music still bears his banner as well. END_OF_DOCUMENT_TOKEN_TO_BE_REPLACED

The Cleveland Orchestra — or at least half of it — marked Valentine’s Day with a straight-through, 50-minute concert led by Belgian early music guru Philippe Herreweghe. The February 14 performance, marketed as a romantic evening of orchestral classics, played to a packed house (marketing works!). END_OF_DOCUMENT_TOKEN_TO_BE_REPLACED

Music is said to be a universal language, but it does speak with different accents. When you’re playing music by Jean Sibelius, it’s helpful to have a Finnish conductor on the podium, which is what made Susanna Mälkki’s pair of Cleveland Orchestra concerts so lucid and communicative earlier this month. END_OF_DOCUMENT_TOKEN_TO_BE_REPLACED