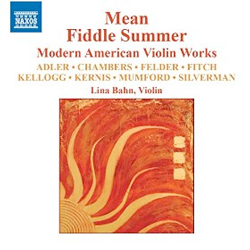 For her latest recording, Mean Fiddle Summer: Modern American Violin Works, Lina Bahn has tapped the repertoire of composers she has admired and championed during her impressive, yet still young career. With a playing time of one hour and fifteen minutes, the CD is a fascinating listen as Bahn performs pieces representing a variety of styles ranging from fiddling to works inspired by Ysaÿe and Bartók. From start to finish, the violinist demonstrates her adroit technical facility, kaleidoscope of colors, and consummate musical taste.

For fourteen years, Lina Bahn served as executive director and violinist with the VERGE Ensemble during its residency at the Corcoran Gallery of Art in Washington, D.C. She has also been a member of the National Gallery New Music Ensemble of the Smithsonian. She is currently Assistant Professor of Violin and Chamber Music at the University of Southern California’s Thornton School of Music.

Adam Silverman’s two works written for Bahn in 2005 are simply delightful. A catchy piece that takes fiddling into the 21st century, Lina’s Hornpipe is really fun, while The viol, the violet and the vine is a highlight of the CD. That track is inspired by works of Ysaÿe and Bartók, and its first movement, “Lively,” is exactly that. Following the beautiful “Sarabande,” the folksy, lilting dance of “Music box” brings the work to an enchanted conclusion.

The CD opens with a hidden gem, Samuel Adler’s Canto III (1976). Its many moods easily hold your attention, and Bahn’s performance sparkles. Another precious stone is David Felder’s entertaining Another Face (1987), a work that provides endless possibilities for creating stories in your head.

Bahn’s interpretations of Aaron Jay Kernis’s A Dance of Life (2010) and Aria-Lament (1990), and Daniel Kellogg’s Sizzle (2007) are magnificent, and her contemplative playing of Evan Chambers’ Celtic-inspired Last Night at Yaddo (2006) brings the recording to a magical ending.

The recording quality of the CD brings Bahn’s pure and focused sound to life. Mean Fiddle Summer was recorded at Roser Atlas Black Box Theater at the University of Colorado, Boulder. Produced by Lina Bahn and Edward Dusinberre and engineered by Kevin Harbison, the album is available for purchase at Classics Online and from NAXOS.

END_OF_DOCUMENT_TOKEN_TO_BE_REPLACED

The strings-only work by Berg has made relatively frequent appearances on the Orchestra’s programs. In 2021, the musicians recorded it for the In Focus series, and it appeared again on last year’s European tour. Friday’s rendition maintained the group’s characteristic light and effortless playing, each section blending as much as possible to echo the work’s original form as a string quartet. At fifteen minutes total, the piece is quite short, but the dense encoded musical meanings require some extra-attentive listening. Splitting up the three movements ensured that each one could be appreciated on its own. END_OF_DOCUMENT_TOKEN_TO_BE_REPLACED