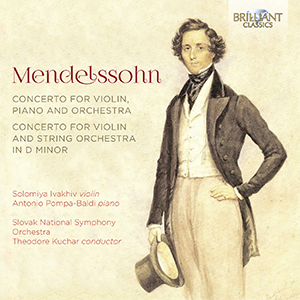 While Felix Mendelssohn’s Concerto in e is played by every violinist at a certain stage in their development, not many listeners are aware of the first violin concerto Mendelssohn composed — in d minor.

His double concerto for violin and piano might be even lesser known. Ukrainian violinist Solomiya Ivakhiv has dedicated her new album Mendelssohn, released by Brilliant Classics, to rediscovering these lost gems. By her side is Italian-born pianist and Cleveland Institute of Music faculty member Antonio Pompa-Baldi. Theodore Kuchar conducts the Slovak National Symphony Orchestra.

In the second movement, the violinist illustrates numerous bittersweet moments with beautiful, soft colors. The main theme evolves in a gently rising arch of emotion. Nearing the end, the low strings produce a memorable moment of dark rumbling thunder, reminiscent of a distant Midwestern thunderstorm. Staying true to the classical nature of this piece, the darkness doesn’t last long and the violin closes lightly with a translucent harmonic.

Resembling a scherzando, the third movement introduces capricious and playful moods. The violin part is flecked with mini cadenzas weaving in and out of the ever so slightly exotic main theme. More than in any of the previous movements, this finale showcases Ivakhiv’s inherent virtuosity. Kuchar leads the orchestra with admirable precision.

The double concerto is the crowning jewel of this album with its captivating melodies and exquisite Mendelssohnian moments. Written one year later in 1823, this work foreshadows the romantic qualities Mendelssohn would develop later in his compositional life.

The piano embodies several roles throughout the work, from percussive, to an arpeggiating harp, to a choral singer. The most stunning moment in the first movement follows a violin cadenza, where Pompa-Baldi creates a harp-like backdrop of sparkles for the violin’s tender and intimate melody. Ivakhiv’s soft dynamics are nuanced and moving, though a few of the stronger long notes lack direction. The movement has a general feeling of gentle musings, followed by returning energy.

The second movement is serious and grave, embracing a vocal flavor. Above running 16th notes in the piano, the violin plays sustained lines that evoke feelings of innocence. Pompa-Baldi displays beautiful voicing throughout the track. The third movement enters with a blast of energy, showcasing the playful virtuosity of both soloists.

The album has an appealing audio clarity, but the balances throughout favor the violin in a way that sounds slightly artificial, and also occasionally distort the chamber music connection between the soloists and the orchestra.

This album sheds light on these early Mendelssohn works, taking a noble stand in service of their sorely needed public exposure. Mendelssohn is available on Amazon and Spotify.

END_OF_DOCUMENT_TOKEN_TO_BE_REPLACED

Franz Welser-Möst led the final bows on Saturday night at Severance, like the star of any show should. The Cleveland Orchestra’s music director is in his element presiding over the ensemble’s annual opera production, which this season packs the drama. Verdi’s Otello — in a concert staging that opened May 21 and runs for two more performances (May 26 and 29) — demands big voices, instrumental forces to match, and a conductor who can give it all shape and direction. END_OF_DOCUMENT_TOKEN_TO_BE_REPLACED

The cimbalom was the feature of the show, an instrument capable of taking on many personas. Its performer, Chester Englander, has shaped his career around the instrument, and has inspired composers to write more repertoire for it, some of which was presented on the program. END_OF_DOCUMENT_TOKEN_TO_BE_REPLACED