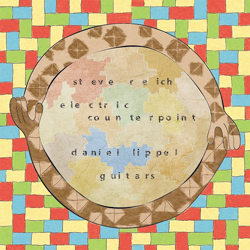 Daniel Lippel has released an EP on the New Focus Recordings label comprising a single work by Steve Reich: Electric Counterpoint (1987), also the title of the 15-minute EP. Lippel is co-founder and director of New Focus Recordings, and has served as resident guitarist of the International Contemporary Ensemble (ICE) since 2005, and of the new music quartet Flexible Music since 2003. He studied at Oberlin with Steven Aron, and with Jason Vieaux at the Cleveland Institute of Music.

In my recent review of Third Coast Percussion’s Steve Reich CD, I touched on the science of psychoacoustics, or the study of how the brain responds to sound and music. Reich often manipulates listeners’ perceptions of time through his repetitive, pulsing works, and Electric Counterpoint is no exception. It’s easy to become lost in Lippel’s playing; he jams his way through the three movements with impeccable rhythm and a verve that, while delightfully engaging, doesn’t emphasize any particular pattern in the music, instead washing over the listener in relaxing bursts of musical chatter.

There are 10 distinct parts in Electric Counterpoint — eight electric guitars and two electric basses. As in Reich’s other “Counterpoint” pieces (New York, Vermont, Cello), in live performances, either an ensemble will play together or a soloist will play one of the voices while the other nine are played on tape. Lippel, in the tradition of many guitarists before him, played and dubbed all 10 parts, giving each an individual flair and style. In his liner notes (available only online), he discusses his approach to the piece and how he strove to highlight the indigenous African influence that Reich has said pervades much of his own music. This approach involved highlighting differences in timbre in each of the parts and emphasizing competing meters or rhythmic structures. It’s a slightly different take on the piece, and it’s quite nice — a bit more dynamic than previous recordings.

The quality of sound also deserves mention. Ryan Streber of Oktaven audiO, a Juilliard-trained composer and audio engineer, mastered the recording. Martin Scherzinger’s expertise in African music informed Lippel’s interpretation, and Michael Caterisano, another Juilliard-trained composer as well as multi-instrumentalist and audio engineer, assisted in the early editing stages.  It’s short. It’s available to listen to for free on the New Focus Recordings website. Check it out here.

END_OF_DOCUMENT_TOKEN_TO_BE_REPLACED

The strings-only work by Berg has made relatively frequent appearances on the Orchestra’s programs. In 2021, the musicians recorded it for the In Focus series, and it appeared again on last year’s European tour. Friday’s rendition maintained the group’s characteristic light and effortless playing, each section blending as much as possible to echo the work’s original form as a string quartet. At fifteen minutes total, the piece is quite short, but the dense encoded musical meanings require some extra-attentive listening. Splitting up the three movements ensured that each one could be appreciated on its own. END_OF_DOCUMENT_TOKEN_TO_BE_REPLACED