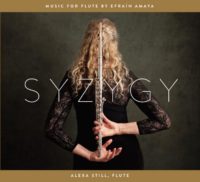 Flutist Alexa Still recently released her second solo album on the Oberlin Music label. Syzygy is comprised of six pieces by Venezuelan-American composer and conductor Efraín Amaya. Assisted by her fellow Oberlin faculty member, pianist Robert Shannon — as well as a few other Oberlin professors and alums — Still showcases her exquisite lyricism and virtuosity on every track.

The term “syzygy” means “moving together for a common goal.” The title comes from the third movement of the opening work, Jubilee (2005), originally written for flutist Carlyn Lloyd and pianist John Warfel to commemorate their 20th anniversary of working together. The piece is clearly a celebration of a balanced partnership, exemplifying an equal and supportive relationship between two instruments.

Amaya’s understanding of the range of the flute is evident in this album’s flowing, arpeggiated lines and swooping octaves. Still shows off her amazing ability to play quick successions of notes smoothly and without missing a pitch.

The album enters a more atmospheric realm with Archipiélagos (2014), which takes the listener on a tour of three groups of islands off the coast of Venezuela. The different personalities of each archipelago come through clearly in this flute/piano duet.

Cellist Darrett Adkins joins Still for the penultimate piece, Pres-ent (2009), which evokes emotional moods rather than creating a more physical climate. “Enamored” creates a sense of longing with drawn-out notes, while abrupt, snapped pizzicati give “Disquiet” an edge.

The theme of working together pervades Syzygy. Duo Ami (1997) begins with “Mantra,” where the flute and piano repeatedly exchange an insistent phrase. Aram Mun joins Still on the album’s final track, Pathways (2009) for two flutes alone. The piece showcases the full capabilities of the instrument and the even collaboration required in a duet, featuring beautiful, running arpeggios on one flute while the other weaves in a melody. Bright staccato blasts fade into airy notes, and thin, almost eerie tones interrupt the smooth lines. At times the flutes trumpet in exact unison. A long, high pitch immediately moves to a low, fuller one to conclude this striking album.

The cimbalom was the feature of the show, an instrument capable of taking on many personas. Its performer, Chester Englander, has shaped his career around the instrument, and has inspired composers to write more repertoire for it, some of which was presented on the program. END_OF_DOCUMENT_TOKEN_TO_BE_REPLACED

You wouldn’t expect that acoustic from a glance at the nave, which is wide and long, but not especially lofty. But when I guest conducted a local amateur choir and professional orchestra in Beethoven’s Mass in C there a few years back, during the first rehearsal we released the final chord of the “Gloria” and listened in astonishment for the next several seconds. The sound continued to roll down the space like the big wave that surfers dream about. END_OF_DOCUMENT_TOKEN_TO_BE_REPLACED