To be “veiled” suggests a loss of orientation, dimmed sight, and a shadowy sense of mystery — ideas that are captured in Cleveland-based Ars Futura Ensemble’s newest album, Veil. Released by Navona Records on September 14, the playlist consists of five multifaceted, many-hued works by Cleveland State University faculty member Greg D’Alessio.

Recorded in Waetjen Auditorium and Drinko Recital Hall at Cleveland State University rather than in a studio, the album may lack a glossy acoustical perfection, but provides a sense of unassuming authenticity.

The ensemble and violist William Bender create a captivating opening with D’Alessio’s title compositio, Veil. Its melodic lines and underlying harmonies create an illusive texture, enveloping the listener in a cloud of sound. The muted tranquility is interrupted by loud splashes that become aggressive and strangely tragic. However, its aggravation never completely subsides and must be accepted. The ensemble blends beautifully, and incorporates a striking dynamic range.

Thread crowns the flute as the star of the show — a challenge Tolliver meets impeccably. The piece is mystical and highly volatile, written with a stylistically vocal flair that features long lines interrupted with agitation, notably from the piano and cello. 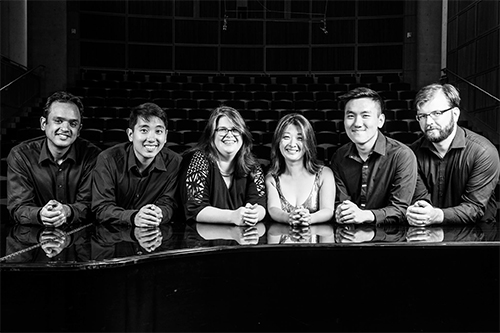 Thread transitions seamlessly to Sono Solo, an interesting work conducted by Pablo Devigo that features the talented cello soloist Robert Nicholson. Kudos also to violinist Yun-Ting Lee, who stands out in several long, uninterrupted melodic passages. Lee compensates for the difficulty of the violin part with beautiful sound quality and a rich tone.

Now’s the time, featuring guest saxophonist John Perrine, is presented in two parts. Here, D’Alessio shows the listener a window into his jazzy inner groove with fascinating rhythmic motives and sensual melodic lines. Perrine plays masterfully, with a beautiful sound and enthralling musicality. The piece co-stars pianist Shuai Wang, a magnificent partner with her sensitive playing and excellent use of dynamics. The balance between the two never wavers.

Both parts one and two begin with contemplative, slow sections, but move on to animated, rhythmic segments that marry jazz with classical. The rest of the ensemble joins in on part two, creating a wonderful backdrop for the two soloists to shine against.

Ironically, the last piece on the album is titled After the Ending, written in two movements. The first is highly dissonant, slow, and meditative. The players integrate several unisons with stunning dynamics and impeccable intonation. The unisons quickly dissipate into dissonance, tearing apart any sense of tonal understanding that may have begun to form.

Guest artists, Victor Beyens, violin, and Gunnar Owen Hirthe, clarinet, emerge as soloists throughout the track. Beyens plays virtuosic elements with a vigorous sense of drama. Though his melodic lines lack direction, his harmonics add a silky texture to the work.

The evocative part two creates a diverse soundscape with exotic elements that are modern, yet approachable. The work conjures images of a snake charmer in the Sahara with its boisterous percussion parts, interrupted by mystical sound effects, harmonics, and block piano chords. The folksiness of the beginning suddenly transitions into an introspective final section. Rinderknecht sparkles with his sizzling percussion as the piece dies down, creating an expressive, yet intimate ending.

Veil is available on spotify, YouTube, Amazon and Google Play.

END_OF_DOCUMENT_TOKEN_TO_BE_REPLACED

Franz Welser-Möst led the final bows on Saturday night at Severance, like the star of any show should. The Cleveland Orchestra’s music director is in his element presiding over the ensemble’s annual opera production, which this season packs the drama. Verdi’s Otello — in a concert staging that opened May 21 and runs for two more performances (May 26 and 29) — demands big voices, instrumental forces to match, and a conductor who can give it all shape and direction. END_OF_DOCUMENT_TOKEN_TO_BE_REPLACED

The cimbalom was the feature of the show, an instrument capable of taking on many personas. Its performer, Chester Englander, has shaped his career around the instrument, and has inspired composers to write more repertoire for it, some of which was presented on the program. END_OF_DOCUMENT_TOKEN_TO_BE_REPLACED