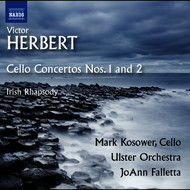 Poor Victor Herbert, the Irish-born, German-trained cellist, conductor, and composer, has gotten the short end of the music history stick. In the late nineteenth- and early twentieth-century he was one of the most acclaimed American musical figures, both as a performer and as a composer of concert works — as well as a successful grand opera (Natoma, 1911) which starred soprano Mary Garden and a young Irish tenor making his operatic debut, John McCormick. But these days Herbert is known for a string of still-performed operettas: Babes in Toyland, Eileen, and Naughty Marietta, among many others, while his concert music has become a vague memory.

Herbert wrote two cello concertos, the second of which has been recorded a number of times, but the first is much less frequently performed. Cleveland Orchestra principal cellist Mark Kosower has recently released a recording on Naxos (8.573517) with the Ulster Orchestra led by JoAnn Falletta. The attractive album contains both of Herbert’s cello concertos, plus a rousing performance of the composer’s Irish Rhapsody for Grand Orchestra (1892).

Concerto No. 1 in D, Op. 8, was composed in 1884, and first performed in Stuttgart in 1885 with the composer as the soloist. Melodic, the work hints at the great tunes that would later appear as songs in Herbert’s operettas and musical comedies. A much sterner work with comparatively greater technical challenges, Concerto No. 2 in e, op. 30 dates from 1894. Both concertos are clearly written by someone with first-hand expertise in the instrument’s capabilities.

An elegant player with fine-grained tone, sensitive phrasing, and fluent technique, Mark Kosower is the perfect advocate for these two concertos. Never aggressive in his playing, his lyrical gifts shine through even in the climaxes. The first concerto’s “Andante,” an operetta song-without-words, is orchestrated with great delicacy. Kosower dispatches the many scales and leaps of the second concerto’s opening and closing movements with ease.

JoAnn Falletta and the Ulster Orchestra are distinguished collaborators, attuned to Kosower’s phrasing and never overwhelming his playing. Recorded in Ulster Hall, Belfast, Northern Ireland, the sound of the disc is clean and transparent.

Victor Herbert’s Irish Rhapsody is an extended medley of Irish songs, most of which are likely unknown to modern listeners, with the possible exception of Believe Me If All Those Endearing Young Charms and Gary Owen. It’s rollicking good fun, and Herbert’s contrapuntal expertise in combining multiple tunes is evident at the end of this persuasive and enjoyable album.

END_OF_DOCUMENT_TOKEN_TO_BE_REPLACED

Rodgers & Hammerstein’s Cinderella was originally produced for television in 1957 — seven years after the animated Disney film was released — and starred Julie Andrews. According to the Rodgers & Hammerstein website, it was viewed by over 100 million people. END_OF_DOCUMENT_TOKEN_TO_BE_REPLACED

The story line has its origin in an 1855 play and an 1842 farce that Thornton Wilder mined for his 1938 play The Merchant of Yonkers. When that turned out to be a flop, in 1954 Wilder made the crucial decision to re-center the show around the character of the legendary marriage broker Dolly Gallagher Levi and renamed it The Matchmaker. END_OF_DOCUMENT_TOKEN_TO_BE_REPLACED

The Dodero Center for the Performing Arts at the Gilmore Academy in Gates Mills is one feature of an impressive campus. The auditorium is shallow, the stage is deep, and the ensemble played without a shell. Throughout the program, the sound, especially in instruments’ lower registers, tended to disappear. END_OF_DOCUMENT_TOKEN_TO_BE_REPLACED