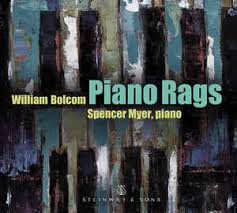 The popularity of ragtime peaked during the late 19th and early 20th centuries, influencing composers like Erik Satie, Claude Debussy, and Igor Stravinsky. The genre experienced a resurgence during the early 1970s with the publishing of Joshua Rifkin’s and Gunther Schuller’s compilations of music by noted ragtime composer Scott Joplin. But it was the 1973 movie The Sting, and its soundtrack featuring Joplin tunes, that thrust the genre back into popular culture. It was during that same time that American composer William Bolcom published his first set of rags.

On his latest CD, William Bolcom Piano Rags, released on the Steinway Label, pianist Spencer Myer breathes stylish flair into sixteen of Bolcom’s rags. From the first track to the last, the pianist presents each work with the perfect combination of the cerebral and the heartfelt. The recording is a wonderful addition to the ragtime discography, and with Jed Distler’s informative liner notes, it’s also a great tribute to the composer.

Myer opens his recording with the popular Graceful Ghost, the first of Bolcom’s three Ghost Rags. Written in 1970 in memory of his father, the work inventively weaves romanticism with the classic ragtime style, and Myer delivers a sensitive performance.

During the second Ghost Rag, Poltergeist, the pianist’s crisp, clean articulations, combined with the perfect amount of thunder in the B section, bring the mischievous creatures to life. And Myer creates a dramatic love song in the third, Dream Shadows.

The composer’s three Classic Rags, composed in 1967, draw on the works of ragtime composers Scott Joplin, Louis Chauvin, and James Scott. Here Myer brings a brilliant swagger to Glad Rag, a sense of nostalgia to Epitaph for Louis Chauvin, and an alluring appeal to Incineratorag.

In the four miniatures that make up The Garden of Eden, Myer plays as though he’s providing the accompaniment to a silent film. “Old Adam” proclaims his power, while Eve seduces him during “The Eternal Feminine.” Myer paints a vivid picture of approaching evil in “The Serpent’s Kiss,” while the earth’s first couple move on with life as they elegantly walk “Through Eden’s Gate.”

The thoroughly enjoyable recording also includes skillful performances of Raggin’ Rudi, Field of Flowers, and Epithalamium, all of which Bolcom dedicated to close friends. Three of the composer’s more recent rags round things out in a most likeable way. Myer gives inspired performances of Estela: Rag Latino and Knockout: A Rag, and his rendition of the album’s final track, The Brooklyn Dodge (A James P. Johnson Stride), makes you want to refill your glass and listen to the entire album again.